England is a tea room paradise, and we visited several on our 2001 tour, but there are two that are particularly well-known that I want to write about today.


The first one is Sally Lunn's Tea House, located in North Parade Passage, in the elegant, Georgian city of Bath.  We arrived in the middle of the afternoon and only had a two hour stay.   Two hours in the City of Bath?  Seriously??? What were  Globus tour planners thinking?   The city was crowded with people.  Our guide said aside from London, Bath and Stratford are the two most visited cities in England.  The photo below gives you an idea of how crowded it was the afternoon we were there.  The area photographed is near the entrance to the 2000 year old thermal springs of the Roman Baths. 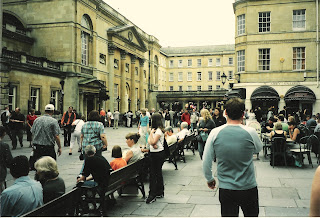 I had seen recipes for Sally Lunn bread in my recipe books, but I didn't learn the history until that day in Bath. Sally was a young French refugee who came to Bath in 1680 to find employment with a baker who rented premises in Lilliput Alley. She sold his wares in the street, but when her skill at baking Brioche was discovered, she was reassigned to the bakery. Her buns were a tremendous success and customers specifically requested them.

In the photo below you can see how narrow North Parade Passage is.  Our guide told us all the buildings in Bath had to be made of Bath Stone so the whole city would look alike. 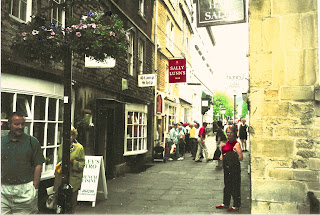 This is the house known as Sally Lunn's House. 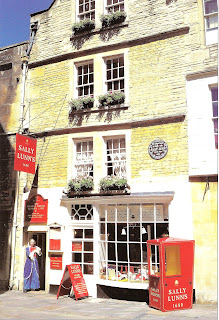 [Post card photo]
We didn't have time to eat there, but we did purchase one of the famous Sally Lunn Buns to sample.  Their special taste and lightness allows them to be enjoyed with either sweet or savory accompaniments.  The photo below is a web site photo, but the box my Sally Lunn bun came in looks just like it.  It's folded up and kept with my other souvenirs. 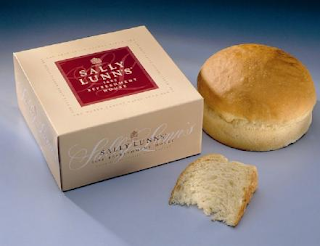 Sally Lunn's house was built long before she arrived in 1680.   Cellar excavations reveal Roman and Medieval foundations dating as early as 1137.  The plaque above the front door reads c. 1482 - which most likely refers to the rebuilding of the fireplaces and chimneys of the parlor during the monastic period.   It is claimed to be the oldest house in Bath. 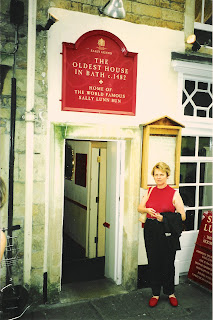 [Me standing at the entrance to Sally Lunn's]
My hubby and I visited the original kitchen museum in the cellar, with its faggot oven, Georgian range, and old baking utensils.   In 1937 Marie Byng-Johnson carried out an extensive restoration of the house.  During that time, Sally Lunn's recipes were discovered in a secret cupboard in the old paneling which can still be seen today. 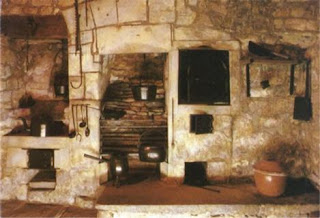 [Photo courtesy of Sally Lunn's website.]
If I'm ever fortunate enough to return to England, I will definitely go back to Sally Lunn's for tea as well as visiting the Pump Room Restaurant for Afternoon Tea.  The Jane Austen Centre is on my list too.  To be sure, more time will be alloted to the City of Bath than two hours!
*  *  *﻿
The second Café Tea Room I visited was Bettys in York.   That's me standing in St. Helen's Square by the street signs in the photo below [wearing the navy and white stripped sweater]. 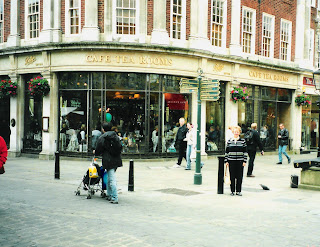 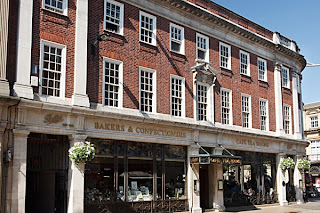 [Photo courtesy of Bettys website]
In 1919 Frederick Belmont opened his first Bettys Café Tea Room in the town of Harrogate. It was an instant success.  In 1936 Mr. Belmont traveled on the maiden voyage of the Queen Mary, and was so enthralled by the splendor of the ship's Art Deco elegance that during the sixth day of sailing he began to dream up plans for a new flagship Café in the heart of York.  He commissioned the Queen Mary's designers and craftsmen to turn a dilapidated furniture store into his most sophisticated branch yet.  One year to the very day that he disembarked from the Queen Mary, Bettys in York opened its doors.   Today there are a total of six Bettys, with two of them in York.
Bettys is still a family-run business.  In the early 1960's they bought Taylors of Harrogate, a leading UK Tea Merchant.  It has proved to be a winning combination.
I brought a Bettys menu home as a keepsake.  My hubby and I ate lunch there and  my journal entry states that I ordered a Chamomile Flowers Tisane, a hard wheat roll, and tomato soup.  My choices weren't too exciting, were they?  ;-)

Betty's serves Afternoon Tea so I'd like to have Afternoon Tea there if I ever return.  Tours are great for first-time visits, if they can be followed up by a return visit to see all the favorite places with a less structured schedule. 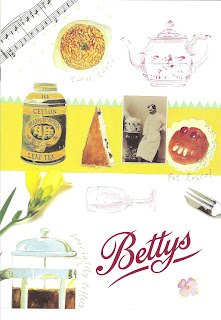 And who was Betty?  Over the years many explanations have been offered, but it still remains a family mystery.  The family 's favorite story, however, is the one which tells of a small girl who interrupted the very first Board Meeting when the issue of what to call the Tea Rooms was being discussed.  The little girl's name was, of course, Betty!
Posted by relevanttealeaf at 12:44 AM