When I visited London's National Portrait Gallery in 2007, two of the photos I purchased were of Anna Maria [Stanhope] Russell, 7th Duchess of Bedford.   In the portrait below she is either dressed for Parliament or another occasion requiring full court dress. 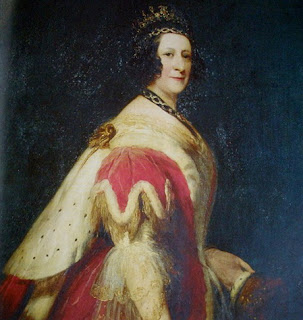 Birth 9/3/1783 - Death 7/3/1857
Every person who enjoys the British tradition of Afternoon Tea, owes a debt of gratitude to this lady!  Tea served around 4:00 or 5:00 o'clock accompanied by a light snack, is declared by many to have originated with Anna in the early 1840's.   Whether it did or didn't [there are some who debate it], Afternoon Tea is synonymous with her name, and most importantly, 155 years after her death the ritual continues to thrive.

The second photo I purchased was of Anna Maria, Marchioness of Tavistock.  Anna became 7th Duchess of Bedford in 1839 when her husband,  Francis Russell, acceded to the dukedom. 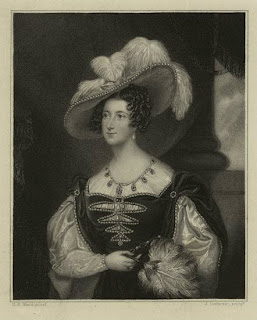 During the 18th century, dinner was served later in the day, and by the early 19th century, the normal time was between 7:00 and 8:30 p.m.  An extra meal called luncheon had been created to fill the midday gap between breakfast and dinner, but since this new meal was very light, the long afternoon with no refreshment left people feeling hungry - Anna described it as "a sinking feeling."
While visiting Belvoir Castle in the 1840's Anna asked her maid to bring her a tray of bread, butter, cakes and tea to tide her over until the main evening meal.  She found taking an afternoon snack to be such a perfect refreshment that it soon became a ritual for her, and it wasn't long until she began inviting friends to her boudoir [feminine sitting room] for an intimate gathering.   She continued the practice at her country house,  Woburn Abbey [the home of the Dukes of Bedford since 1547].  There are numerous state rooms at Woburn which were kept for visiting royals.  The Duchess entertained Queen Victoria and Prince Albert there in 1841.  Soon Queen Victoria was enthralled with the ritual, and she herself held Drawing Room Teas at Buckingham Palace. 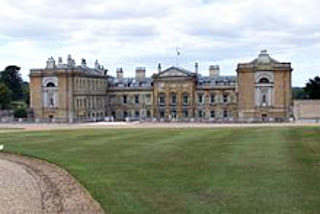 [Internet photo of Woburn Abbey in Bedfordshire, England]
Below is a 1841 portrait of the Duchess in a Renaissance Revival dress. 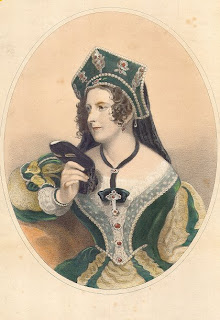 The ermine trim on Anna's sleeves in the photo below show she is dressed for a very special occasion. 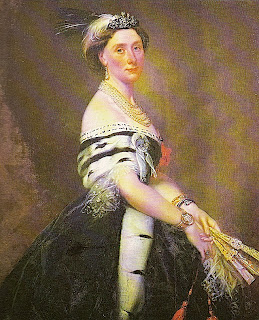 Anna was born a member of British socialite royalty.   She was friends with Queen Victoria even before Victoria ascended to the throne.  [Anna was 36 years her senior.]  From 1837 through 1841 she served Queen Victoria as  one of her Ladies-in-Waiting.  She was Lady of the Bedchamber - a personal attendant to the Queen.  The position is traditionally held by a female member of a noble family.
Happy [belated] 229th birthday, Anna!
Thank you for the pleasures of Afternoon Tea.
﻿
Posted by relevanttealeaf at 12:00 AM