The menu was a three-course High Tea - no finger sandwiches and/or bite-size desserts that are served at an Afternoon Tea.   Most of Cristy's teas are High Teas.   Below is a photo of Cristy, the creator and hostess of the fabulous teas in this series of posts. 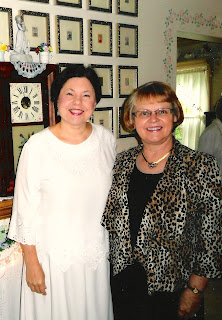 
Cristy used her light blue Depression Glass dishware - the same ones that she used for her "Hydrangea Blue & Plum Rose" tea in August 2011.  When I saw them, I liked them so much I bought a set of my own!  Cristy collects bone china porcelain floral bouquets, and they were displayed throughout the tablescape.  One is visible in the photo below. 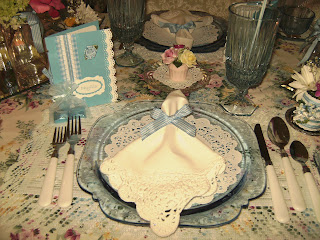 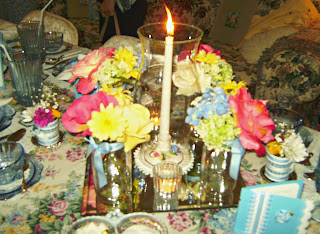 Lori and I seated before the tea began. Notice the fireplace mantle in the background decorated to coordinate with the tablescape and theme.  The vase of fresh flowers in the photo below [to the right of the glass of iced tea] were favors for each guest to take home. 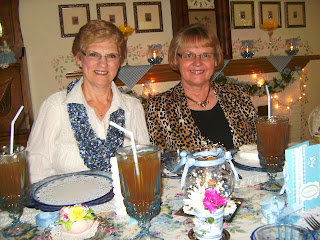 Our iced beverage was an organic black tea and lemonade from Trader Joe's. 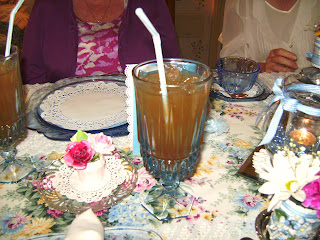 The tea began with a toast of sparkling fruit juice.  Notice the personalized menus in the photo below that Cristy made for everyone to take home as well as a nylon bag of chocolates.﻿ 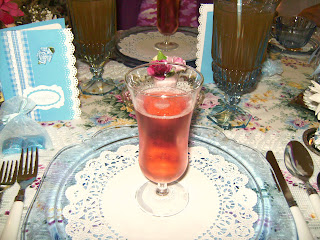 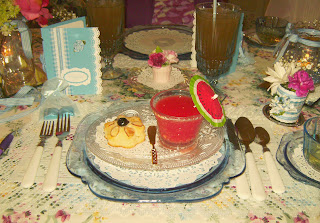 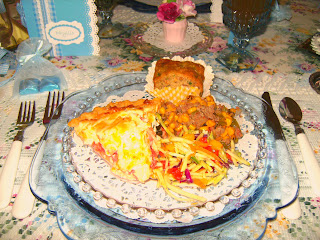 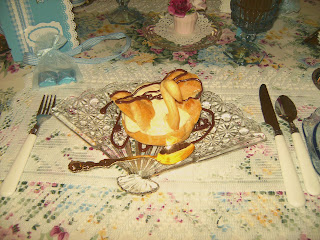 The tea was a delight from start to finish!

Tomorrow I'll be sharing Cristy's "Thyme in the Garden" High Tea from June 2011.﻿