This past week was busy preparing for my daughter's sixth annual birthday tea party which was held on Saturday, September 15th.  At her request, it's a celebration of getting together with dear friends [her two piano teachers], rather than focusing on her birthday.   [I wrote about her five previous tea parties August 28th thru September 3rd.  If you haven't already done so, please take a look at past themes.]

First was making the invitations... 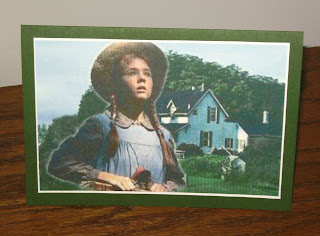 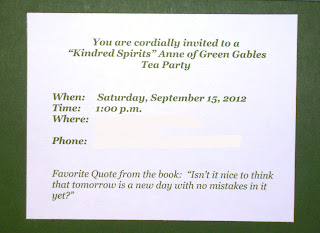 And ordering the Anne of Green Gables cookbooks, tea-time CD's and Anne doll that would be the centerpiece for the table - most of which came from Sullivan Entertainment, producers of the DVD starring Megan Follows. 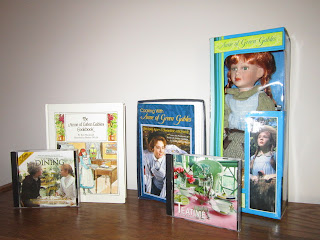 Then determining the menu... 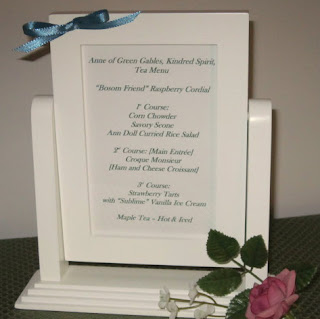 Focusing on the tablescape... which began with making "Anne" place/name cards. 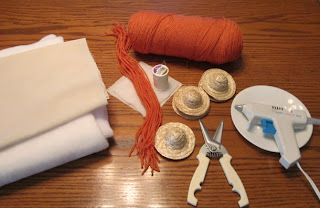 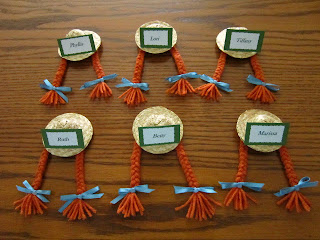 Making "favor bags" for the ladies to take home...  I packaged Trader Joe's Maple Leaf cookies since Canada's national symbol is the Maple Leaf.  Trader Joe's only sells these cookies in the fall, and the clerk told me they can't keep them on the shelf.  They're delicious!  A Lipton's pyramid tea bag of Bavarian Wild Berry black tea was included in the favor bag to drink with the cookies.

The favor wouldn't be complete without some chocolate caramels since Anne likened "being in the depths of despair" to the uncomfortable feeling of trying to eat, and getting a lump in your throat so you can't swallow anything - "not even if it was a chocolate caramel."  She told Marilla, "I had one chocolate caramel two years ago and it was simply delicious.  I've often dreamed since then that I had a lot of chocolate caramels, but I always wake up just when I'm going to eat them!" 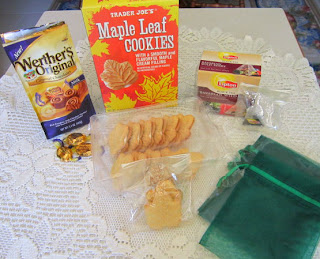 Choosing my table linens...  I bought a white lace table liner several years ago that has sat in it's original packaging because it was too large for most of my tablescapes, so I altered it for this tea party.  I purchased a sage green tablecloth to lay over the top, and was pleased with the lacy, layered look. 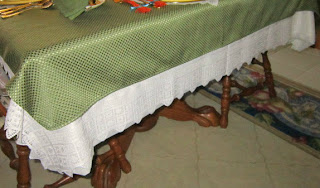 The fun part was setting the table the night before the tea party. 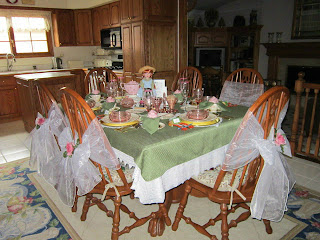 There's Anne standing center stage on her slate - before she broke it over Gilbert Blythe's head! 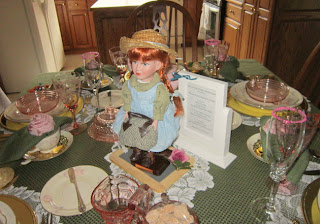 The color pink and roses had to be part of the tablescape since Anne saw an early wild rose on the buggy ride to White Sands, and exclaimed to Marilla, "Isn't it lovely?  Don't you think it must be glad to be a rose?  Wouldn't it be nice if roses could talk?  I'm sure they could tell us lovely things.  And isn't pink the most bewitching color in the world?  I love it, but I can't wear it.  Redheaded people can't wear pink, not even in imagination!" 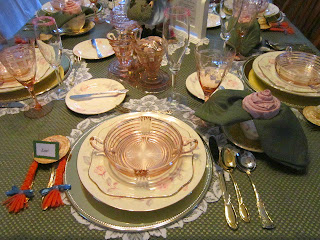 Even the chairs got decorated! 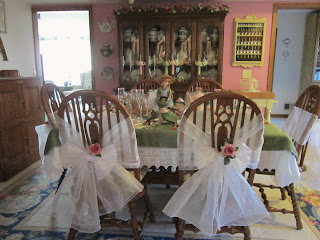 Then it was time to get busy on food prep in the kitchen!  Savory scones cooling from the oven... 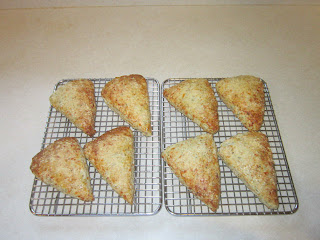 Making "Anne hats" for the salad...   This required trips to a few $ stores to find miniature-sized cookies, but I found them! 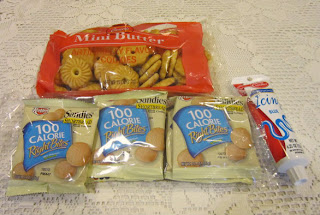 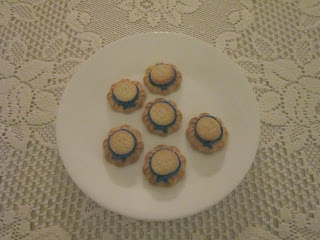 A toast with Raspberry Cordial was the first thing on the menu, and I used the recipe in Kate Macdonald's, The Anne of Green Gables Cookbook.  Kate is L.M. Montgomery's granddaughter.  In the cookbook the recipe is called Diana Barry's Favourite Raspberry Cordial, but I changed it to "Bosom Friend" Raspberry Cordial for our tea party.  The recipe called for 2 packages of frozen unsweetened raspberries, and I used 1 [12 oz.] package and substituted fresh raspberries for the second frozen package.  It was delicious and nobody got tipsy!  ;-) 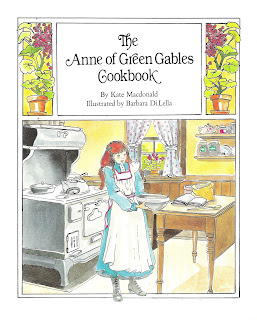 I dusted the rims of the glasses with pink sugar for an extra touch.  I wish I would have taken a picture of the ladies toasting to "Kindred Spirits," but I didn't!  ;-( 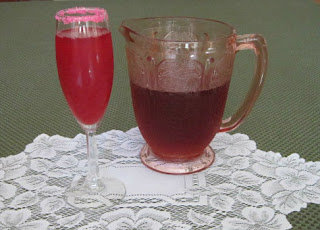 At 1:00 p.m. the table was ready, and it was time for the tea party to begin.  Our "blessing" for the meal was everyone saying The Lord's Prayer together, since that was the prayer Marilla gave Anne to memorize the day Rachel Lynde came calling and their "verbal conflict" ensued!  The line, "Give us this day our daily bread" made the prayer fitting for the blessing. 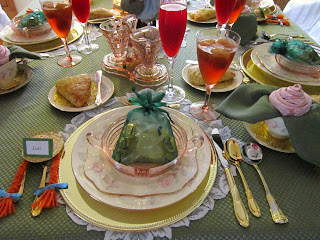 Maple flavored black tea was served - both iced and hot.

First Course:  Corn Chowder, Savory Scones and "Anne Doll" Curried Rice Salad.  [Corn and Potatoes probably would have been grown on Matthew and Marilla Cuthbert's farm, and were the two main ingredients in the chowder.  Potatoes are Prince Edward Island's primary cash crop.] 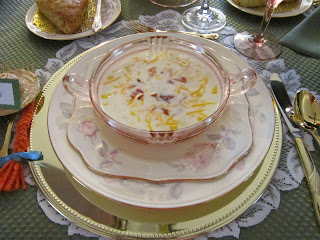 A word of acknowledgement about the "Anne Doll Salad":  When I was putting the final touches on my menu last week I visited Lady B's Time for Tea blog and Ruthie posted a photo of a rag doll salad that she served at a recent tea party.  As soon as I saw the carrot hair I knew I had to incorporate it into my Anne menu with a few variations.  Thanks, Ruthie, for the inspiration!  I'm sure a culinary expert would know how to braid carrots, but they snapped when I tried, so I settled for curling them instead.  And Anne did get a hair cut after her heart-breaking experience with the black dye, so braids weren't absolutely necessary. 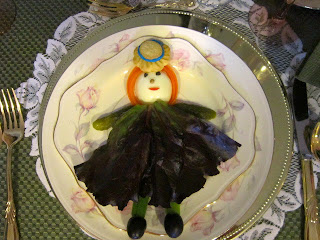 This is the cold, curried rice salad with chopped marinated artichoke hearts that was under Anne's red leaf lettuce dress. 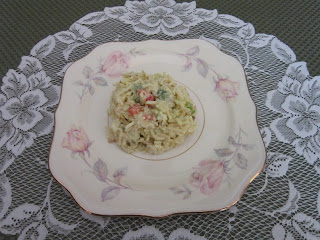 2nd Course:  Croque Monsieur [Ham and Cheese Croissant].  While it's nothing Marilla would have prepared, Anne might have had it when she went to one of the fancy teas with Josephine Barry in Charlottetown!  ;-) 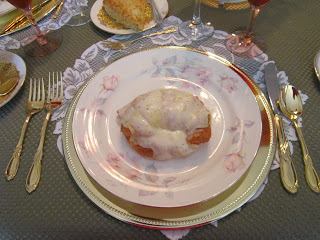 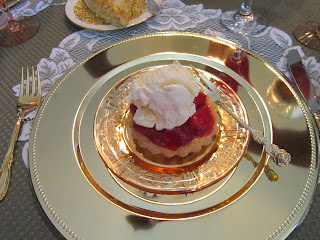 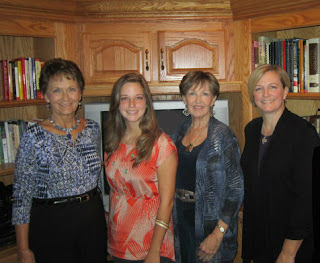 Thank you for allowing me to share the details of this very special tea party with you.  It was so much fun to plan and host.  The only thing that could be better than hosting an Anne of Green Gables tea party, is actually visiting Prince Edward Island!   It's on my bucket list and hopefully will happen someday.