Figural teapots [people, animals, furniture, houses, flowers, etc.] date back to the nineteenth century, and they're still popular today.  I have several figural teapots in my collection which I'll share over time, but today I want to tell you about my newest acquisition that I got last month - a butler!
At the end of  my August 9th  post I mentioned Bombay Company and shared photos of some blue and white teaware that I purchased from the company before they closed their U.S. stores. That post  prompted a visit to E-bay to see  if any Bombay products  were listed.   There were, indeed, several Bombay items, and the butler teapot pictured below was among them.   At that same time I was planning  my daughter's Anne of Green Gables tea party,  and I immediately thought of Anne's visits to Josephine Barry's mansion in Charlottetown.   Miss. Barry had a butler, so I thought the teapot would be perfect for the tea party.   I placed a bid and won the teapot.   The seller, a lady from Los Angeles California, was so pleased someone who appreciates teapots was getting it.   She said she hated to part with it, but had to downsize.  It was in brand new condition, and had never been used. 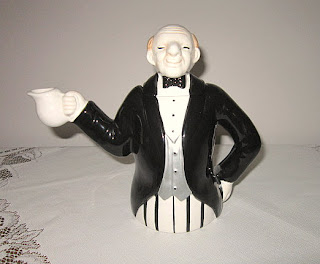 As it turns out, I didn't use the butler teapot for the Anne of Green Gables tea party after all, but he's sitting patiently in my china cabinet waiting for the time when I need the assistance of a butler!  ;-)

And since I'm discussing the Bombay Company, I've decided to share a few other tea related items that I purchased from their store.  The first is a beautifully decorated glass teapot Christmas ornament.  It's not a full-size teapot, but it's not a tiny miniature either.  It measures 5 inches tall by 6 1/2 inches wide.  I keep it displayed on a shelf in my office year around, because it's too pretty to pack away. 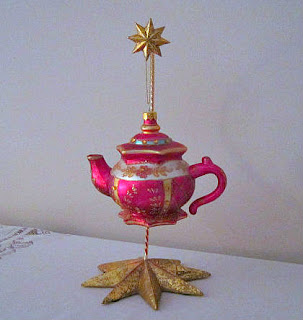 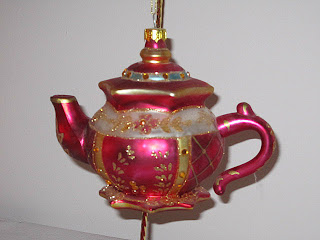 I also purchased a set of eight crystal knife rests straight from nineteenth century etiquette [although they were actually invented in the early eighteenth century].  Proper Victorian hostesses used them, and so does this twenty-first century hostess if there's  ample room on the tabletop.

They are placed to the right of each plate in a formal setting, to prop up knives to keep the tablecloth immaculate.  Leave it to the Victorians! But they are a lovely, useful addition to the tabletop. 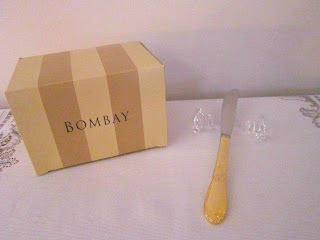 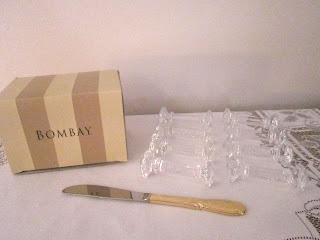 The spoon cabinet pictured below came from Bombay too.  It was originally a dark cherry wood, but my hubby antiqued it ivory so it would blend with the other furniture in the room better.  A glass door encloses the cabinet, which I really like.  I think it's one of the prettiest spoon cabinets I've seen. 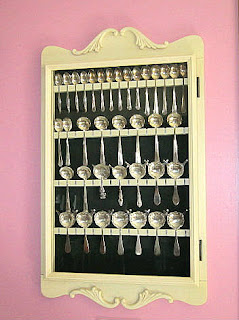 Incidentally, the Bombay website states an on-line store will be opening in the fall of 2012.   Well it's fall now, and I'm keeping a watchful eye!

Do you have any treasures from Bombay Company?