I don't have an unusually large collection of teapots, but I decided it would be fun to share some of them with you this week, starting with my three Hall teapots.   The 6 cup, cream and gold colored teapot below, is an "Aladdin" style teapot. 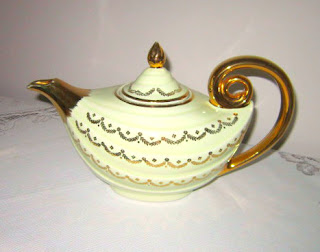 Robert Hall founded the Hall China Company in Liverpool, Ohio, in 1903, when he accepted ownership of the defunct East Liverpool Potteries Company.  Just a year after launching the company he died, and Robert Taggart Hall, one of his eight children, took over the company.
Production of Hall dinnerware began during 1908 - 1914, and was, for the most part, sold door-to-door.  After weak sales, the company began producing decorated teapots around 1919, and became the largest producer in the world.   In the 1940's the teapot business began to dwindle, when coffee became the preferred beverage of many, and by the 1960's teapot sales fell to insignificance.
In the mid-1920's the directors of Hall China made a decision to associate with the Jewel Tea Company to produce an exclusive line of dinnerware for them, and it became Hall's most popular dinnerware.  The dishes weren't given a name until 1943 when the company began referring to the pattern as "Autumn."  The name was changed to "Autumn Leaf" in 1969.  It's a beautiful fall pattern.   Imagine an entire table set with these dishes! 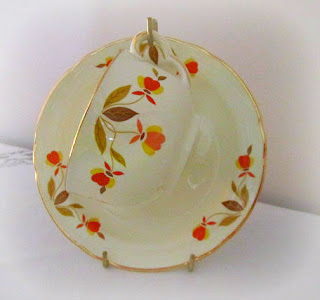 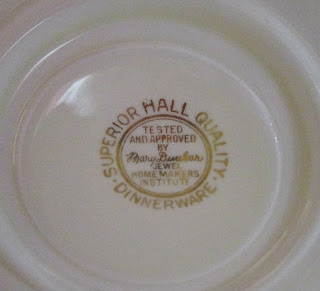 Hall China Company is best known for restaurant china today, but it has a particularly successful home market line of dinnerware that  is sold by  Longaberger baskets.  The company celebrated its 100th birthday in 2003 with the publication of A Centennial History of the Hall China Company by Catherine S. Vodrey. 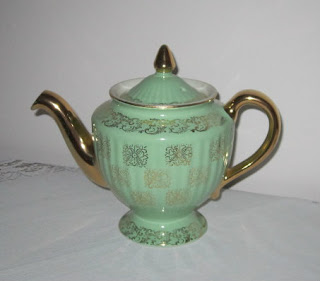 Thanks to a single fire process developed by Robert Taggert Hall, Hall China is durable, non-porous and it doesn't craze - a feature I really like. 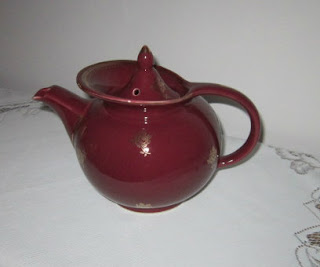 Posted by relevanttealeaf at 9:56 AM