A Return Visit to the Whitney Restaurant

Two friends and I returned to The Whitney for Afternoon Tea last Thursday, September 20th.  Our reservations were for 12:30 p.m.  [Previous posts about The Whitney can be read here and here.]  This is a follow-up post since I promised to write about my return visit under the direction of the new General Manager and Chef. 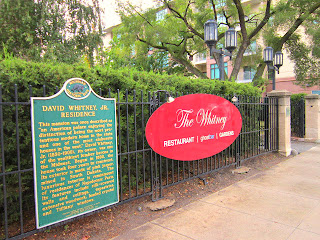 Those are huge canvas-like tulips behind us in the photo below. Wonder what they'll replace them with now that fall is officially here? 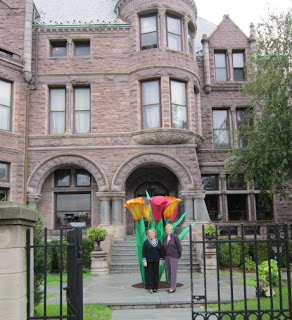 Doors to the beautiful mansion. 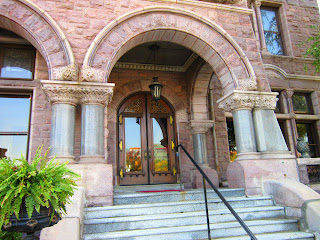 Our table set for three.  I liked the white linen napkins with The Whitney embroidered  in yellow.   If they had them before, I didn't remember them. 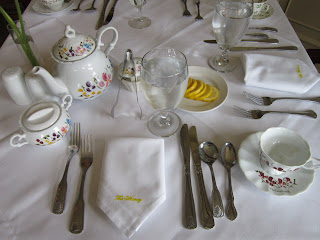 The tea service was painted especially for The Whitney and was in use the last time I had Afternoon Tea there. 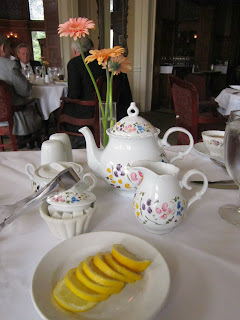 We were offered two tea choices:  Earl Grey and a Cranberry tisane.  I ordered the Earl Grey and it was very good, with a mild taste of bergamot - not overpowering as some Earl Grey's can be.
Dave was our capable and attentative server.  He's been at the Whitney for five years. 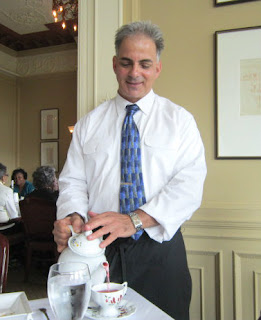 We were seated in the Drawing Room on the first floor.  The service was prompt and efficient.  Previously I was seated in Flora's Tea Room on the second floor.    As nice as it was being served tea in Mrs. Whitney's sitting room, it seemed as though we were forgotten about upstairs.  Flora's Tea Room is only used for large groups now.
Enjoying my tea at The Whitney.﻿ 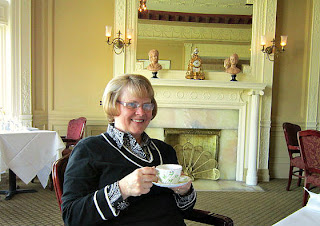 To accompany our tea, we were served freshly-baked, warm-from-the oven strawberry scones with citrus marmalade.  Dave declared them to be "the best ever," and they lived up to their reputation.  They were baked by The Whitney's pastry chef, Jessica. 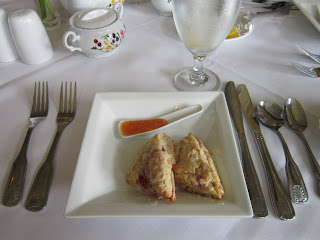 Detroit Fox 2 Morning had just filmed a cooking demonstration of Jessica the day before featuring "Pair of Pears."  You can view it here and get the recipe.
To our surprise and delight Dave brought Jessica to our table so we could meet her.   She's the lovely young lady standing behind my friend, Lori [in the purple], and me. 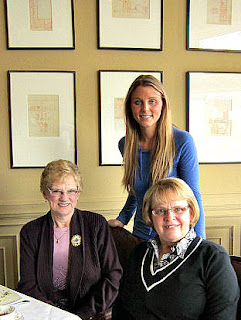 Following the scone course we were served Shrimp Bisque. 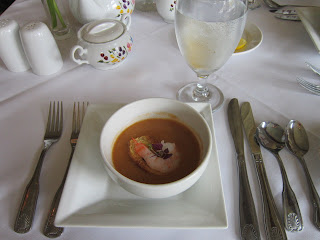 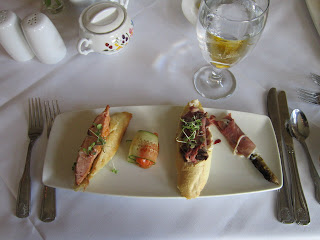 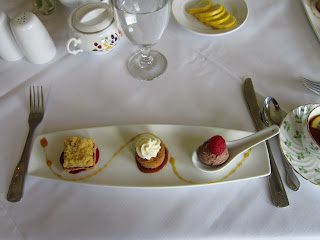 Afternoon Tea is $29.00 per person, plus sales tax and 20% gratuity - which figures out to about $36.50.    Reservations must be made at least 48 hours in advance.   Valet parking on Whitney property is $5.00.
Following Afternoon Tea, Dave personally gave us and some other ladies who had dined in the adjoining Reception Room, a tour of the mansion.   It was almost as good as the meal, which was hard to top!
I had heard David Whitney had a secret safe built into the paneled wall in the dining room, but I had no idea where.  Dave rolled back a corner of the carpet to open the section exposing the safe [which was actually a bank vault!]  Those are tapestries on the upper half of the paneled walls. 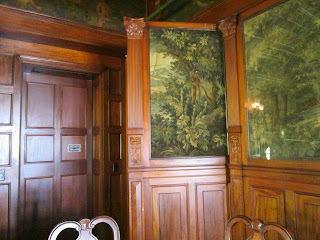 Can you see the vault? 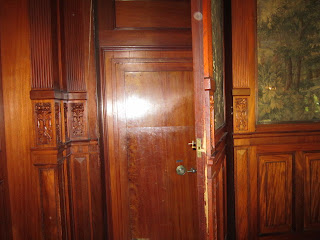 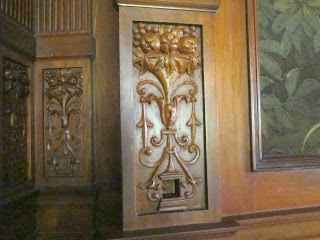 When the Whitney's occupied the mansion, the ball room was located on the second floor, and the art gallery was on the third floor.
An artist drawing of the mansion hanging above one of the fireplaces. 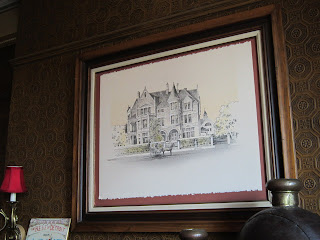 And since ladies enjoy seeing powder rooms, I took a picture of that too!  ;-) It was a wonderful afternoon at the Whitney, and I look forward to returning.  Kudos to Dave for such outstanding service!
Posted by relevanttealeaf at 7:00 AM