The Whitney - "A Restaurant in a Palace"

Even though I grew up in a suburb of Detroit, it wasn't until 2003 that I became familiar with The Whitney. 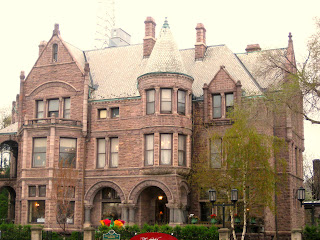 The Whitney is a beautiful mansion located at 4421 Woodward Avenue near downtown Detroit.  Construction on the massive Romanesque Revival style structure began in 1890 as a lavish  residence for David Whitney Jr. and his family.  It took four years to complete at a cost of $400,000 [about $9.5 million today].  An additional $250,000 was spent on decorating and furnishing the home, plus another $300,000 on artwork from around the world.  It is built of South Dakota jasper, a rare variety of pink granite.   The entrance porch has a series of arches with polished jasper columns, while a wide two-story bay window provides views up and down Woodward avenue.  The roof is multi-gabled and turreted with slate tiles in a fish scale pattern.
The 21,000 square foot, three story home's interior  is as impressive  as the exterior.  It has 52 rooms [including 10 bathrooms], 20 fireplaces, and 218 windows,  many of which are stained-glass  crafted by Tiffany's of New York, and estimated to be worth more than the house itself.  It was the first residential home in Detroit to have a hydraulic elevator for personal use.   A grand staircase dominates the Great Hall, that is elaborately adorned with a bronze balustrade, illuminated by colorful Tiffany stained glass panels on the second and third floors.  David Whitney, the largest lumber baron in the Midwest, knew his wood.  His appreciation for trees and lumber was expressed in the various paneling throughout the mansion.
I found this quote amusing: "Whitney himself made it known that he would be happy living in a log cabin, but Mrs. Whitney felt otherwise."    Mr. Whitney's first wife, Flora McLaughlin Whitney, passed away in 1882, and he married her sister, Sarah Jane McLaughlin, one year later.   She lived in the mansion until her death in March 1917.

David Whitney, Jr.  passed away in 1900 and only got to live in the mansion six years. 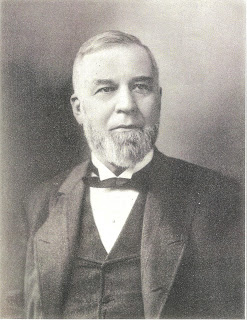 [Internet Photo]
Mr. Whitney acquired the nickname of "Mr. Woodward Avenue" because of the real estate he acquired in Detroit.  This is what the mansion looked like in 1905 before Woodward Avenue became a bustling city thoroughfare, and buildings sprung up surrounding the mansion.    Presently, the southern edge of the property line is occupied by an apartment complex operated by Wayne State University. 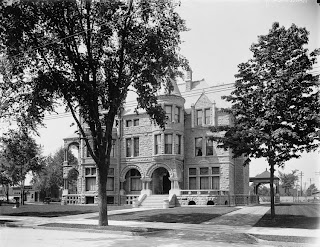 [Internet Photo]
The Whitney mansion was listed as a Michigan State Historic site in 1971 and listed on the U.S. National Register of Historic places in 1972.   The marker below was erected in 1980. 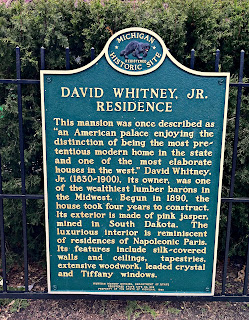 [Internet Photo]
Below are some of the Tiffany Glass Windows in the mansion.  The center window depicts a bearded knight, paying homage to the various members of the Whitney family who were knighted, as well as their royal blood line in England. 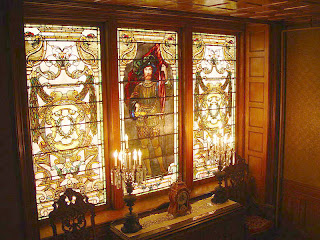 [Internet Photo]
In 1941 the Whitney family  [David Whitney had four children - one son and three daughters], gave the house to the Wayne County Medical Society who occupied it until 1956.   In 1957 they sold the house to the  Visiting Nurse Association who used the residence for offices.   In 1978 it was sold to antique collector and entrepreneur Richard Kughn who wanted to preserve the home for the public's enjoyment.  The lengthy, and costly restoration required a fire-supression system, and 32 furnaces and air-conditioniting systems.  The servants' wing was gutted and replaced with three state-of-the art kitchens.  Mr. Kughn re-opened the mansion as The Whitney restaurant in 1986.
In 2003 I attended a Victorian Tea at the Whitney to benefit the American Autoimmune Related Diseases Association.   A tea at the Whitney was very fitting since Mr. & Mrs. Whitney frequently entertained their friends at receptions, teas, evening parties and musicales at their home. 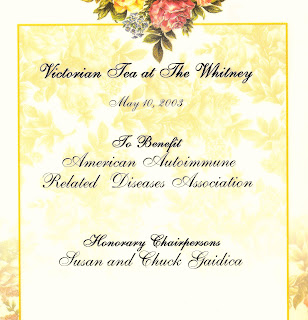 The Great Hall - the largest room in the mansion.  All the main rooms of the first floor open to the hall, creating an enormous open space.  The floor is English tile laid in a Flemish mosaic design.  The walls are paneled oak.  The dominant features of the great hall are the fireplace and massive staircase. 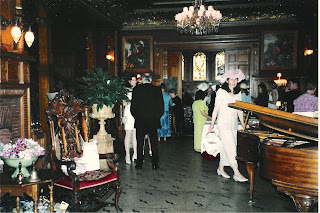 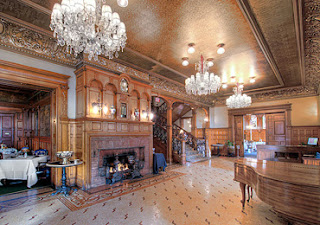 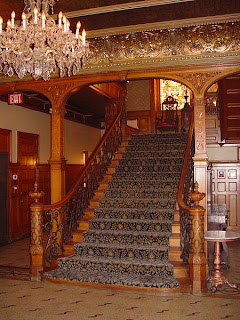 [Internet Photo]
Our Tea Society was seated in the Drawing Room. 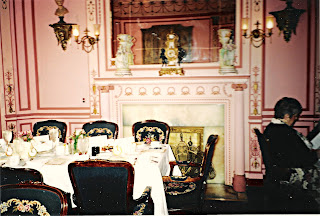 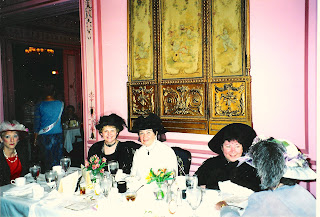 Me [left] with Linda Pudlik, President of the Tea Society,  An"tea"quers 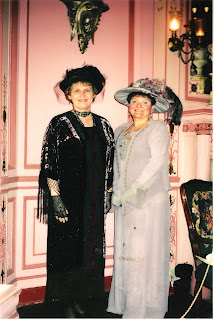 Me with Marlene Lipon [then owner of Farmstead Bed & Breakfast in Hartland, MI].  Marlene is a Tea Etiquette Consultant, and I took her Teatime Etiquette Seminar in 2003 - a separate post for another time. 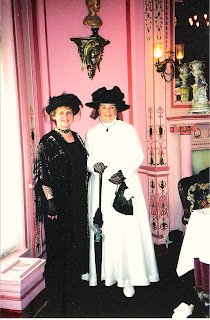 Notice all the intricate detail work on the walls and ceilings. 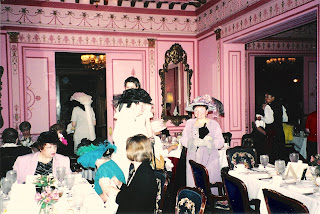 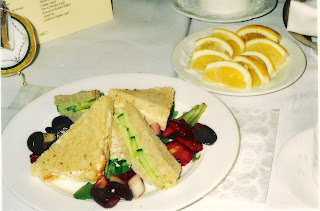 The Whitney was sold to new owners in 2007 and one of the improvements was changing the Pepto-Bismol pink walls to a lovely beige and white! ;-) 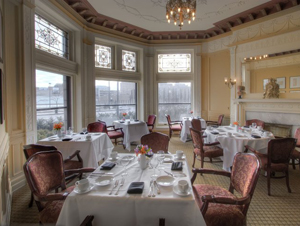 [Photo courtesy of Whitney Facebook]
Tomorrow I'll be blogging about the Whitney under the new ownership and another, more recent, tea time experience there.

Posted by relevanttealeaf at 4:59 PM

Email ThisBlogThis!Share to TwitterShare to FacebookShare to Pinterest
Labels: The Whitney Restaurant; a Victorian Tea