Today is Flag Day, and iced tea is perfect for sipping while sitting on the porch swing  watching "Old Glory" wave in the breeze! 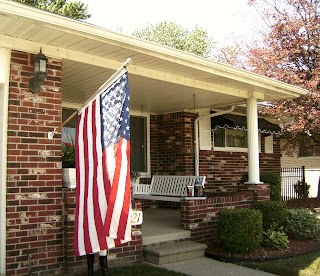 Ever wonder how our American flag got that name?  I did, and researched it for this post.

A young sea captain, Stephen Driver, of Salem, Massachusetts, was the first person to use the name, "Old Glory" for the American flag on March 17, 1824.   It was his 21st birthday, and his mother and friends gave him the flag as a gift.   He was thrilled with his gift and dubbed the flag, "Old Glory."   It sailed around the world twice.  When Captain Driver retired to Tennessee, and the state seceded from the Union in the Civil War, rebels tried to find and destroy Driver's flag.   They were unsuccessful, however, because the  flag was hidden inside the seams of his bed quilt.  His flag originally had 24 stars, but it was altered in 1861 with ten additional stars  plus a white anchor signifying Driver's years at sea.

In 1862 when Union soldiers entered Nashville, Old Glory was once again displayed with pride above the state capitol in celebration of the Union's triumph.  It never flew again after that, but bequeathed its name to all American flags.

Captain Driver cherished Old Glory until just before his death when he placed it into his daughter's arms with these words, "...This has been my constant companion... Cherish it as I have cherished it."

The flag was carefully protected by the family until it was sent to the Smithsonian Institute in 1922.    Visitors can still see it behind protected glass in the National Museum of American History.

On August 3, 1949 President Harry Truman signed the observance of National Flag Day on June 14 into law with the approval of Congress.

And for a little bit of Michigan's American flag history,  our dearly beloved J.L. Hudson Department Store [which I've blogged about several times] used to proudly display "The Largest Flag in the World" from the Woodward Avenue side of its downtown flagship store.   The annual unfurling of the 1,500 pound, and more than 24,000 square feet of stars and strips occurred every Flag Day.   It took 60 men to raise the rolled flag to a catwalk that ran along the bottom of the ninth-floor windows where  the top of the flag was secured, and then unfurled  as the Detroit Police Band played patriotic music.   The flag extended from the ninth floor to the bottom of the second floor windows.

It was donated to the Smithsonian Institute in 1976, and they later gave it to the Great American Flag Foundation in Houston, Texas. 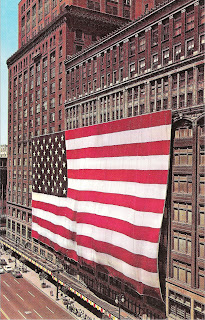 "You're a grand old flag,
You're a high flying flag
And forever in peace may you wave.
You're the emblem of the land I love.
The home of the free and the brave.
Ev'ry heart beats true 'neath the Red. White and Blue,
Where there's never a boast or brag.
Should auld acquaintance be forgot,
Keep your eye on the grand old flag!"
-by George M. Cohan -

I got the idea of skewering blackberries as an addition to iced tea from Denise LeCroy's Uniquely Tea blog.   I read her blog faithfully until it went on a hiatus.  I'm happy to write that its been reactivated and  the first post was yesterday [on the subject of  iced tea].   Denise  writes from England where she is  now living.   Take some time to visit her blog.   It's lovely and always informative. 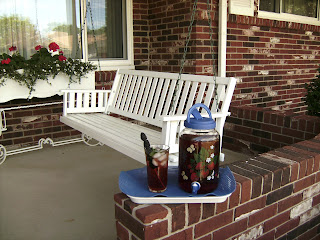 Today is  my 100th post.  [Don't giggle all you blogger veterans who've  been doing it for years! ;-) ]  I'm finding it a fun and rewarding experience, and am looking forward to writing many more posts!   It seemed appropriate to have a "give away" today.    So if you would like to win this teapot night light... 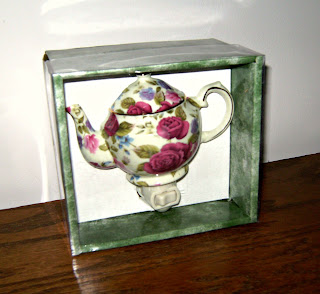 and this lovely book... 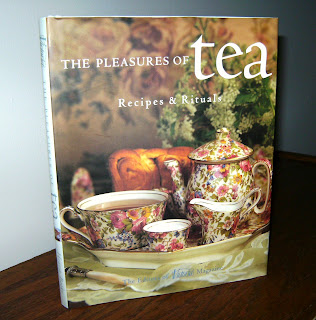 just leave a comment at the end of this post.   A winner [U.S. resident] will be drawn Sunday evening, June 17th and announced in my Monday,  June 18th post.   If you haven't become a "Follower" of my blog yet, I'd like to extend an invitation to do so.  I'd be delighted to have you!