Pursuing Tea in the Hospitality Industry

Trying to convince hotel [and restaurant] management that implementing a tea program is a
wise business decision is a difficult task, but I was willing to take on the challenge.  I achieved limited success with one hotel,  Somerset Inn in Troy, MI. 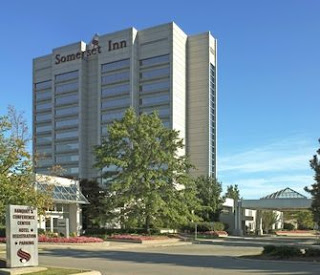 The hotel sits adjacent to Somerset Collection - an upscale mall with destinctive stores such as Neiman Marcus, Saks Fifth Avenue, Nordstrom's, Macy's and many others.


I visited the hotel one day in October 2005 to have lunch at their restaurant, which  happens to be called Crumpets.   I loved that name for their restaurant because it goes perfectly with tea!  I discovered they  served generic tea bags [not an uncommon occurance in many hotel restaurants], so it  seemed they could use some tea consulting if management was interested.

As I ate my lunch I couldn't help thinking what a perfect place it would be to offer Afternoon Tea to guest shoppers at the nearby mall - especially since no one else in the area was doing it.

I called to make an appointment with the  Director of Operations, Mr. Duane Swanson, and he graciously granted one.   At the onset of our meeting he mentioned that he didn't care for tea, but he was very open to upgrading the restaurant's tea selections.   As a result of our meetings they now serve Harney & Sons Fine Teas.   With the upgrades Mr. Swanson said he observed "noticeable expressions of interest and delight from their guests."  And best of all, he tried - and liked - Harney's Citron Green tea.

He took me on a little tour to show me that when the hotel opened in 1973, it was built with a tea room. The room is rarely used now, and when it is, it's not for tea functions.   Since Somerset Hotel hosts many conferences, Mr. Swanson was more open to focusing on conference tea breaks rather than afternoon tea.

Proper tea preparations had never been explained to his kitchen or serving staff, so he asked if I'd come and do a training session with them.   Knowing it would be the first exposure to  proper tea preparations for many of them,  we decided if they saw and personally partook of a "tea experience" the impact and inspiration would be much greater.  So a mini tea party was worked into my 90 minute training session.   I conducted two separate sessions on  March 2, 2006 in order to accommodate all of the staff.   They were very receptive, and Mr. Swanson said in a note the next day that there had been a flurry of excited conversation regarding the sessions.

After his staff was trained, Mr. Swanson wanted to offer a complimentary  tea break to one of the groups who came to the hotel several times a year for  conferences.   They were into holistic healing so he felt they would be particularly receptive to a specialized tea break.  The tea break was offered on March 31, 2006.   I made a tea concentrate of rooibos, a flavored green tea, and a black tea.  We served a group of about 80, and they thoroughly enjoyed it and were very appreciative.  Below are photos of the tea break set-up. 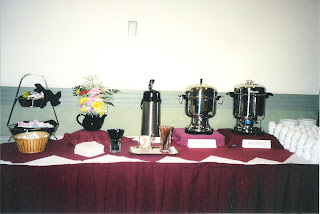 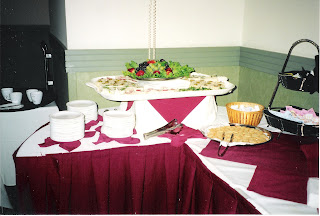 Mr. Swanson said it was a very beneficial experience  for everyone and he was pleased.   A press release entitled, "Somerset Inn Steps Into Spring with Tea" is still posted on their website today.

The last communication I had with Mr. Swanson was in November of 2006 when he mentioned the uncertain economic conditions, cutbacks, layoffs, etc. and a reluctance to delve any further into  a tea program.   He and his staff were a pleasure to work with and I truly enjoyed my Somerset experience.

Also part of my tea journey in 2005  was attending the Mid-Atlantic Tea Business Association's first annual seminar in Mechanicsburg, Pennsylvania.  Bruce Richardson was the guest speaker and spoke on "What's Hot in Tea" and "From Bush to Cup: How Tea Gets to You."   I blogged about the seminar here.﻿

Posted by relevanttealeaf at 11:49 PM