Did you know June is National Iced Tea Month?  The Tea Council of the U.S.A. bestowed the honor in 1992.

In the summer of 2010 while researching iced tea for a magazine article I was writing, I discovered so much interesting information that it was difficult to stay within the 800 word count allotted to me.   I will share brief tidbits  in today's post. 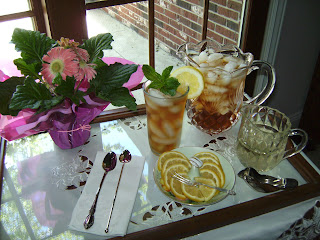 Iced tea is the quintessential summertime beverage, but most southern households and restaurants serve it year-round.   60% of all tea consumed in the U.S. is drunk in the south and 90% of that is iced.   It's been dubbed  the "Table Wine of the South."

The Tea Association of the U.S.A. reported that 85% of all tea consumed in the U.S. is iced,   making it, "The Distinctively American Beverage."

Richard Blechynden, an Englishman and India Tea Commissioner, is usually credited with the "invention" of iced tea at the 1904 World's Fair in St. Louis.   He had planned to serve samples of hot tea from India in his pavilion, but because the weather was sweltering no one was interested.  So he poured his freshly brewed hot tea over ice and the spectators loved the thirst-quenching, cold beverage - and took the idea back to their homes.   Properly made iced tea became the symbol of a good hostess.

In truth, Richard Blechynden can only be credited with "popularizing" iced tea.    Cookbooks printed in 1800 gave recipes for cold green tea.  New York City's Fifth Avenue hotels offered iced tea on their menus in 1871, and an 1887 White House cookbook recounted serving the beverage at the Presidential Mansion.

Iced tea was an amenity to those traveling the Rock Island Railroad in 1878.  And during the summer of 1886, large coolers of iced tea were reported in Washington Senate offices to help offset the heat.  It even made an appearance at the 1893 Chicago World's Fair.

I like the versatility of iced tea.  It  can be served formally or informally, and just about anywhere. 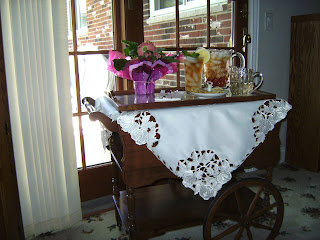 Iced Tea Tips:
Enjoy iced tea throughout the month of June - and all summer long!