I'm a long-time resident of southeastern Michigan, and I've visited many wonderful places over the years, but it wasn't until February 2011 that I visited the Grosse Pointe War Memorial, in Grosse Pointe Farms, MI. 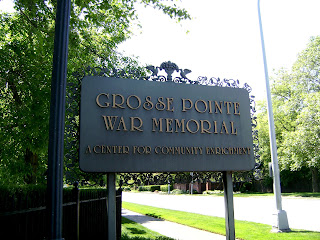 Pictured below is the Italian Renaissance mansion that was built in 1910 as a residence for Russell and Marion Alger and their three children.   They named it "The Moorings."  The front of the mansion [which faces Lake Shore Dr.] has a circular brick courtyard with a fountain.  The exterior walls are stucco, with a tile roof.  The back overlooks beautiful Lake St. Clair.   I read there is virtually no wood in the home's structure because Russell and Marion's first home - a Canadian log cabin - caught fire and burned to the ground. 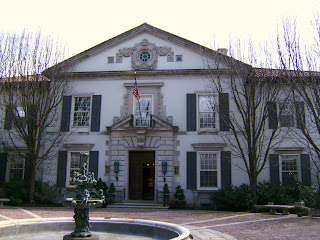 After Mr. Alger's death in 1930, Mrs. Alger moved out of the house, allowing the Detroit Institute of Arts to use it for a time.  In the spring of 1949 she deeded the house and grounds to the Grosse Pointe War Memorial Association.   Today the house is a living memorial to veterans by serving as an enrichment center to residents of all ages.

The house is a State and National Historic Site. 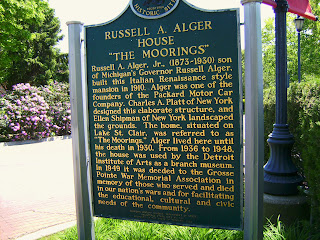 It was a tea event that brought me to the War Memorial.   The historic mansion is  no stranger to tea.   The Alger's daughter, Josephine, recalled formal Sunday afternoon teas being served at the mansion when she was growing up. 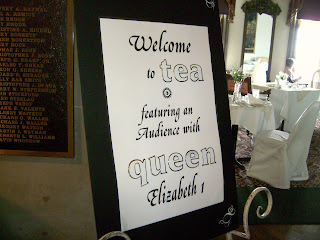 The Reception Room and Dining Room were beautifully set up for tea, and an Audience with Queen Elizabeth I followed the tea meal.  I loved their signage in the foyer.  The price was $23 per person.

This table for three was reserved for my two friends and myself in the Dining Room.  It was beautifully set with crisp white linens and lovely mis-matched china teacups.   Not visible in the photo are windows  that overlook Lake St. Clair - a very picturesque setting for tea time. 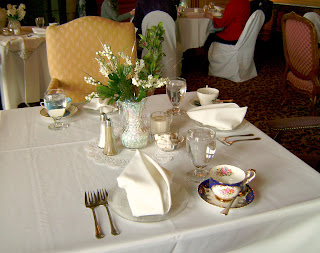 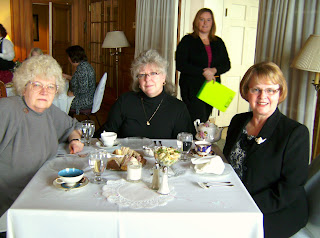 The War Memorial's booklet of classes and event offerings for Jan./Feb. 2011  listed a new class they were offering, "Introduction to the World of Tea," taught by a Certified Tea Specialist through the Specialty Tea Institute [a division of the Tea Association of the U.S.A.]  I considered taking the one session class, but since I had already taken a certification class  through S.T.A.  I opted not to attend.   I was impressed that the War Memorial  was offering tea education as part of their life-long learning program.


There were two tea offerings - a caffeine-free tisane [herbal] and a regular black caffeinated   Earl Grey.    The tea, which was good and piping hot,  was made from quality tea bags.    The tags dangling from the teapot lid  gave-away the mystery -  loose tea or bagged?    Isn't that a beautiful teacup? 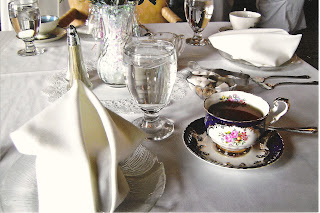 Honey and lemon anyone?   Lovely presentation! 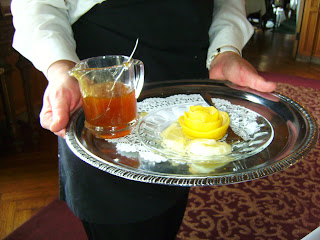 Scones were not included in the menu.  The savory part of the meal consisted of  pasta salad and sandwich wedges - turkey, ham and egg salad, on assorted breads.   As a detail person, I was surprised to see crusts on the tea sandwiches and tea enthusiasts reading this post will notice it too.   But the sandwiches were freshly made and good, as opposed to  crustless, dried-out tea sandwiches I've had at some tea experiences. 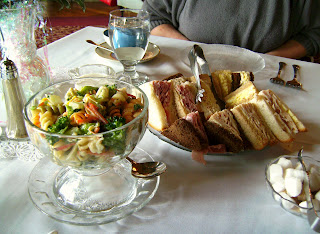 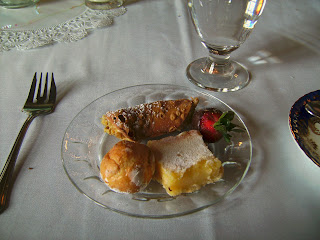 After tea, we retired to the Library to meet the Queen and a member of her Court, who demonstrated Renaissance dances. 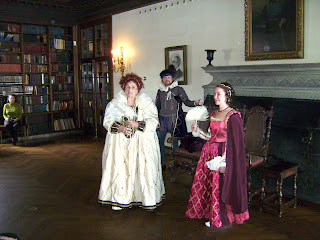 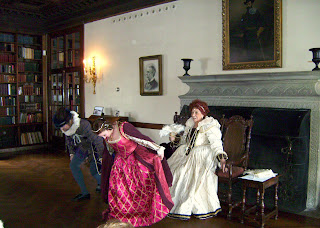 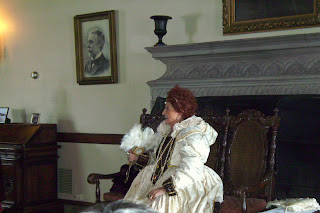 The tea was well attended, and it was a very enjoyable way to spend a February afternoon.  Tomorrow's post will feature the  second and third teas I attended at the Grosse Pointe War Memorial.

Posted by relevanttealeaf at 12:08 AM