Since June is traditionally a wedding month, I wanted to write about the White Bible Ceremony on my blog.   I had never heard of it until Southern Lady Magazine featured  it in their May/June 2005 issue, when  Alabama's former First Lady, Patsy Riley, revived the old southern tradition at the Governor's Mansion.

It's a meaningful ceremony for about-to-be-wed couples and their closest family members, held a week or so before the wedding.    The ceremony is full of symbolism through flowers.   The bride-to-be receives a bouquet of flowers, presented stem by stem, with each flower representing a quality found in a Christian marriage, explained as the ceremony unfolds.  It draws the couple aside from the busyness of wedding preparations long enough to reflect on the spiritual aspect of their upcoming wedding.

First, I reserved a date with the couple, and printed invitations for those who would be attending.  Then I ordered a White Bible and had the couple's name imprinted on the cover.   Next I ordered a silver plated  Victorian tussie-mussie to hold the bride's flowers  [which was a gift for her to keep]. 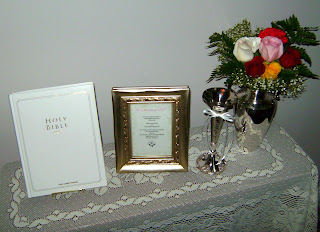 It's not a legal ceremony, so an ordained/licensed minister isn't required, but since my son is a minister and knew the couple well, he performed the ceremony.   The couple, Grant & Abbey, are pictured in the photo below.    When the ceremony begins the tussie-mussie is empty. 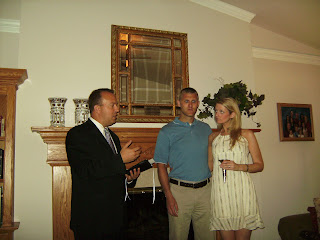 The family members who presented flowers to Abbey were her dad, mom and sister.  Grant's parent's  lived out-of-town, so weren't able to attend.   The first  flowers in Abbey's tussie-mussie  were two red roses symbolizing love - the foundation of the home.  That love is three-fold: the love between the bride and groom; the love of  parents; and the love of God.   The  yellow rose, symbolized sincerity.   Her dad is shown in the photo below giving her a pink rose which represented his giving her in marriage to Grant. 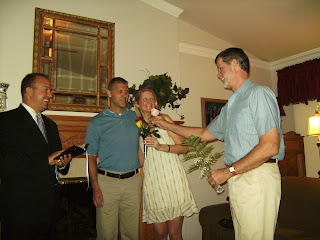 The next flower given by her mother  was a white rose which symbolized purity and unity. 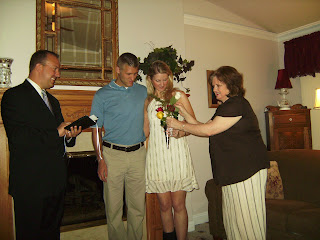 Abbey's sister, Jenna, gave her a red carnation which symbolized the decisions that would  be made in their marriage and their need to rely on God's guidance in making those decisions.  And a white carnation for purity of heart.  All three participants placed greenery into the vase - symbolizing Christian growth, and babies breath for the children that would be born into their home.

Steve [the minister] gave the couple white ribbon  streamers to tie around the tussie-mussie as an indication that their love and marriage vows would bind them together as husband and wife. 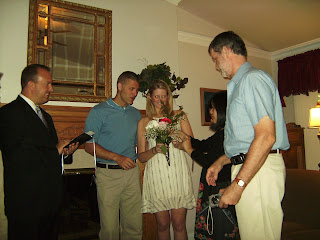 Lastly, I presented Grant and Abbey with their new White Bible to remind them to open God's Word throughout their marriage, and allow it to be the cornerstone of their home. 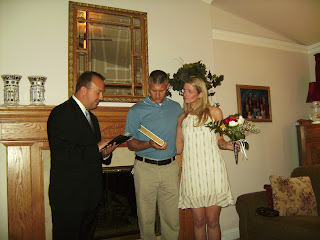 Our Worship Pastor's wife sang, "Grow Old Along With Me," and the ceremony was over. 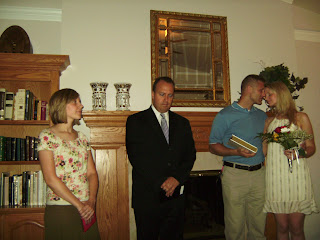 And what would a celebration be without food and beverage?   Grant & Abbey were married in August so I made a tea punch, accompanied by a buffet of cheese and crackers and fruit, and, of course, a "trial-run" wedding cake! 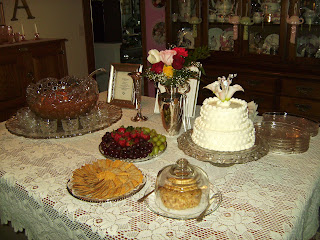 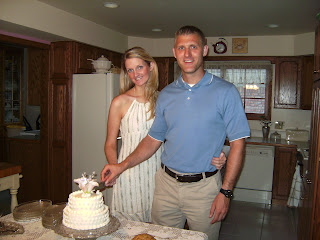 If you should want to host a White Bible Ceremony, many ideas and options are available on the Internet.   Just Google it.

Posted by relevanttealeaf at 12:20 AM