On Tuesday, April 5, 2011 I returned to Grosse Pointe War Memorial with a friend for their  Tea and Bell Choir Performance.  Their wonderful signage welcomed us and told us we were at the right place. 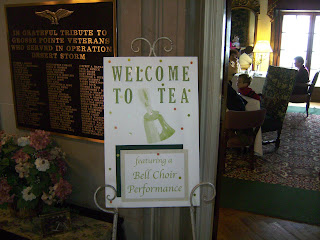 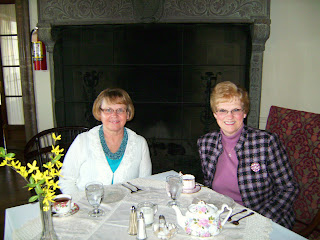 As with their February tea - the tables were set with crisp white linens and lovely mis-matched china teacups, only this time a teapot was placed on our table after we made our selection [as opposed to servers refilling our teacups].  There were no tea bag tags dangling from the teapot lid,  so the tea was properly decanted before being brought to our table.   As before, we had our choice between a caffeine-free tisane or a black tea. 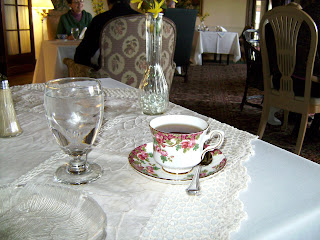 The sandwich selections were the same, but a potato salad replaced the pasta salad. 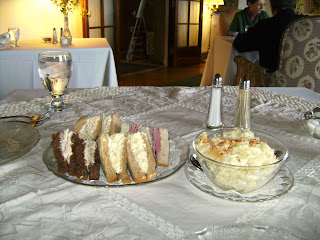 Dessert was a slice of Lemon Chiffon Cake 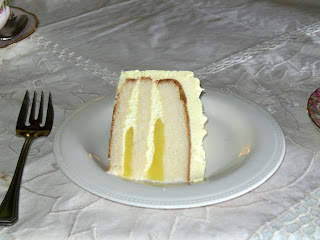 Following tea we went into the Library  for a mini concert by the Chancel Bell Choir of St. Paul Evangelical Lutheran Church in Grosse Pointe Farms.   A fun and unexpected part of their program was giving  the audience an opportunity to ring the bells for a few select,  easy songs.   The bells were Malmark Handbells, identical to the ones we had at Warren Woods Nazarene [my former church], and it brought back fond memories of my bell choir days there. 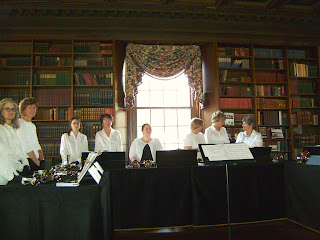 Another  enjoyable afternoon at the Grosse Pointe War Memorial!

A pianist played  soft music throughout the tea,  instead of  an entertainment type  program as was  done at   previous teas.   The price of the tea was increased to $32.00 per person.

The menu was upgraded, and included scones.   I neglected to get a photo of the scones,  but the consensus was that they were  commercially prepared and frozen, rather than freshly made.  Guests at my table expressed disappointment that they didn't measure up to the War Memorial's standard. 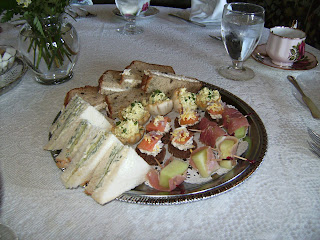 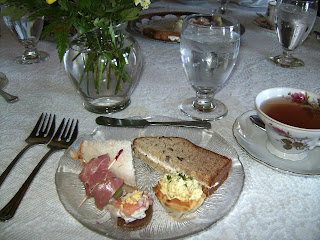 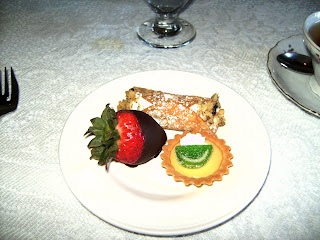 Eight months have lapsed since another tea has been offered.   As a tea enthusiast, I had hopes of the War Memorial  hosting monthly teas  on the east side similar to what  the Longacre House  in Farmington Hills hosts on the west side.   [I blogged about two Longacre  teas  here  and here. ]

Both historic homes were deeded to the community for the enrichment of  residents, and both are non-profit.   The Farmington Hills Cultural Arts Department began their tea program in the fall of 2008 and in four short years have successfully achieved sell-out status of their monthly theme teas.

I stopped by the War Memorial shortly after the October tea to talk to the interim Dicector of Life-long Learning regarding the establishment of a tea program there.  I volunteered to help with the endeavor, but was told the War Memorial doesn't have a volunteer program, and that teas would only  be scheduled as occasional events.  How disappointing and unfortunate, when the house and area are so conducive to the refined pleasures of Afternoon Tea.  Teas have the potential to be another star in the War Memorial's crown since [at present] there are no other venues on the east side offering such a program.   Hopefully the possibility will be re-evalutated at a later time.   I think Mrs. Alger [who had tea served in the mansion when she was a resident] would have been pleased that such a program was being offered.

I will blog about the Grosse Pointe War Memorial again in the near future,  as I'm hoping to get a group together to  tour  the mansion.   Now wouldn't a tea and tour be fun?  ;-)

Posted by relevanttealeaf at 12:26 AM