In June 2003, I learned that Hoffman Media was going to publish a sister magazine to Southern Lady entitled, Tea Time.  The first issue was scheduled for publication September 2003.

I've always enjoyed writing, so I contacted Hoffman Media  regarding freelance articles, and  was asked to send them a sample of my writing.

Since I had spent a lot of time at the Victorian Tea Room in Wyandotte, both taking tea,  as well as observing its behind-the-scenes workings,  I decided to make the tea room the subject of my article.     I sent my completed article to Barbara Cockerham, the magazine editor at that time, and waited for a response.    I was elated to learn that with a few edits, the article  would appear in the magazine's Premier Issue [which was displayed from September 2003 until  January 1, 2004].   I wondered if writing would become my new niche in the tea world??? 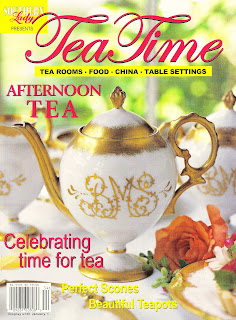 Tea Time is a beautiful publication and I'm happy for its continuing success.  I have a copy of every issue and enjoy them all.

In the third issue of Tea Time magazine was an ad for a Southern Lady Celebration  [to be held in November 2004] in Sandestin, Florida.   Knowing this was Magnolia & Ivy's new location, Shirley [owner of Victorian Tea Room] and I made plans to attend.  It was a fabulous event called,  "A Weekend of Tea and Roses." 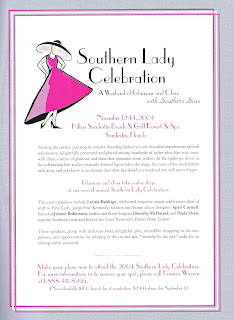 Magnolia & Ivy created a special tea for all attendees called "Celebration Blend", and international make-up artist Michael Marcus created a special lipstick for everyone as well. Alexandra Stoddard, nationally acclaimed interior designer and author, was one of the guest speakers. 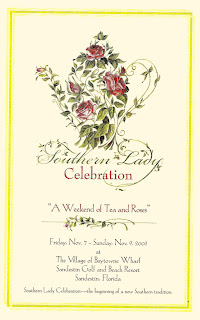 One of the highlights for Shirley and me was having our photo taken with Phyllis Hoffman DePiano [President of Hoffman Media] and Tea Time editor, Barbara Cockerham. 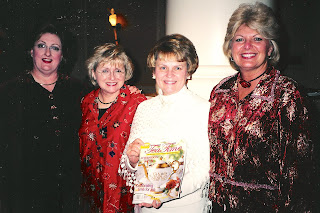 Another highlight was seeing Kay and Terri again and their beautiful new tea room. 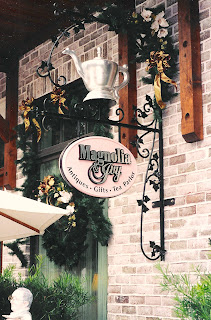 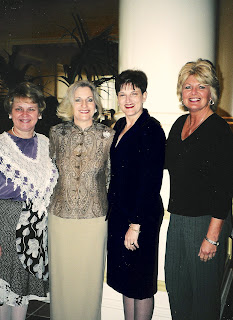 
In the photo below, Shirley and I are having Afternoon Tea at Magnolia & Ivy  [Guests almost always wore hats and/or furs while taking tea there, which  M & I made available.] 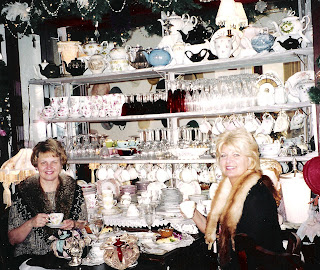 In the fall of 2005 I started writing for a small Colorado based publication [now available in all states] that had an emphasis on tea, called Miss Kitty's Journal.   The magazine eventually evolved into a Red Hat publication, but I continued to write about tea.  When I started blogging, I decided to cease writing for the publication so I could focus my attention on my  blog as my writing outlet. 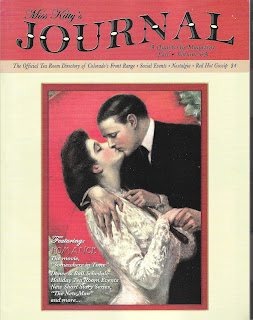 Posted by relevanttealeaf at 9:54 PM