The Titanic Prepares to Sail...

My online Titanic Newsletter  stated April 1st, 1912 was the date originally planned for Titanic's much awaited sea trials.  However, due to the high winds around Belfast, which would have made sailing her down the narrow channel of the River Lagan hazardous,  the trials were postponed until April 2nd.   There was still plenty to do inside the vessel so the time was certainly not wasted.

When Tuesday, April 2nd dawned, the weather was clear enough to undertake the trials and crowds gathered on the banks of the river to witness Titanic's grand passage.  Shortly before 6:00 a.m., the tugs guided the Titanic from her berth into open water.  After a morning of manouvering tests, at 2:00 p.m. the Titanic was set on a straight course out into the Irish Sea.  At about 8:00 p.m. the Titanic departed for Southampton.  After an uneventful 600 mile voyage she took her place in Berth 44 from where she would soon depart on her  maiden voyage.

Titanic countdown... a mere 13 days remaining until her foundering.

Royal Crown Derby is reissuing the china pattern used in the à la carte Restaurant [which Titanic passengers referred to as the "Ritz"], in commemoration of the 100th Anniversary of its sinking.   In the style of Louis XVI, it features a delicate gold encrusted border with printed ornaments of Chaplet and Festoons finished in tints of green. 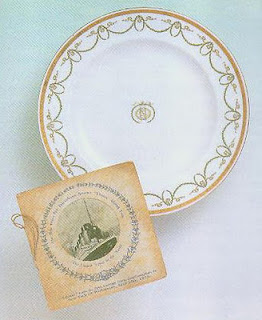 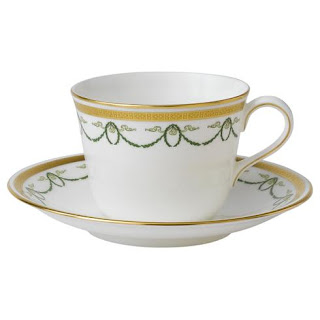 Tomorrow's post will be about a special Titanic event.

Posted by relevanttealeaf at 12:43 AM