Every state has its "crown jewels," and Mackinac Island is one of Michigan's.  The  island is  located in Lake Huron, at the eastern end of the Straits of Mackinac between the state's Upper and Lower Peninsulas.  High speed ferries transport people to and from the island in about 16 minutes.   The island became one of the nation's favored summer resort destinations during the Victorian era, and remains very popular today.

The famous Grand Hotel is probably the first place that comes to mind when you think of Mackinac Island, but there are many other wonderful places to visit while on the island as well. 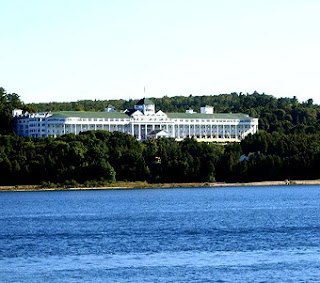 The hotel was built in 1887, with Michigan white pine lumber, in Queen Anne architectural styling.  It has 385 rooms with no two  decorated the same.   I've visited the island many times, but only stayed overnight on the island twice - once at the Grand Hotel and once at a Bed & Breakfast.   [Typically, we stay in Mackinaw City and ferry across to the island.]  Through the generosity of our son, we stayed in the Grand Hotel's Presidential Suite.   Five U.S. Presidents have visited the hotel.  While reading a framed letter from President Truman following his stay, I noticed an error [long before the days of computers with spell check].  As a secretary myself at the time, I took comfort in seeing even Presidential secretaries make mistakes!   ;-) 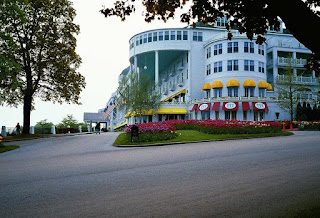 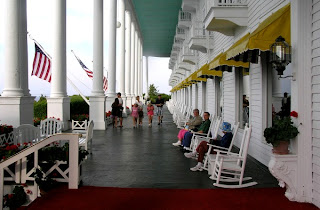 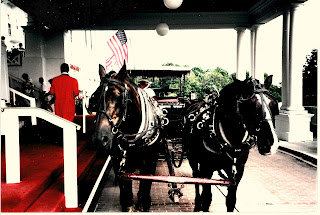 The 1980 movie, "Somewhere in Time" starring Christopher Reeves and Jane Seymour,  was filmed at the Grand Hotel. 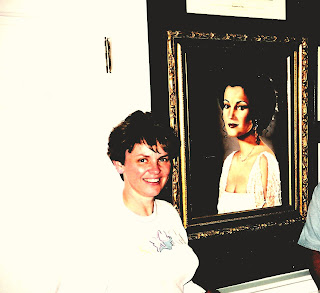 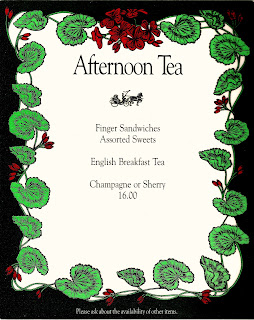 Notice the green and red geranium border around the menu.  Carleton Varney was the Interior Designer for the Grand Hotel, and he used floral patterns with vibrant colors.  The carpeting is a red geranium pattern. 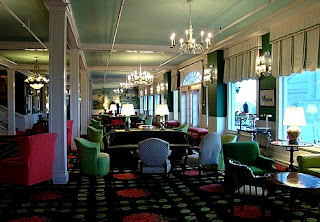 Chamber music is played during tea-time.  Below a violinist and pianist are pictured. 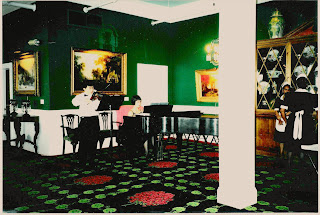 Tea-time table and servers are ready. 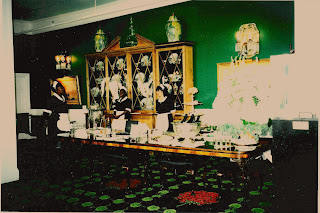 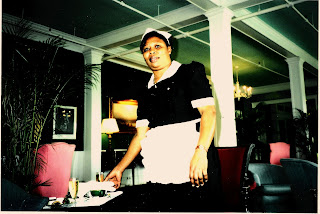 Plated assorted savories [finger sandwiches], scones, fruit, and desserts were brought to our low table next to a sofa and chair.  The most unique food item served was a cup of salted nuts.  I had  never had that offered at tea-time, but I liked the salty option.  The tea served was English breakfast. 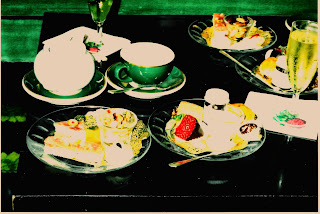 Located in the hotel is Carleton's Tea Store. 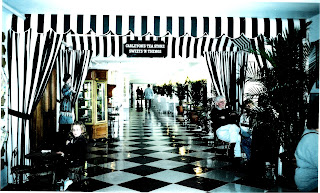 They sell wonderful loose-leaf teas. I particularly enjoy a cherry flavored black tea they blend, and on more than one visit a tin of it has come home with me.   It's much more calorie friendly than the island's famous fudge made by Murdick's, Ryba's and others!  ;-) 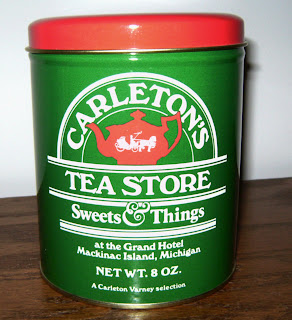 Posted by relevanttealeaf at 1:06 AM