Last Dinner on the Titanic

One of my birthday presents in 1998 was a book, Last Dinner on the Titanic, from my son and daughter-in-law.   Steve [the gift giver] taught high school history before entering the ministry, and is a big Titanic buff. 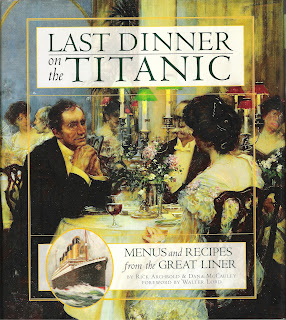 I loved reading the book, but it was eight years before I really put it to good use.  Upon retiring from my job, I was asked by a tea room owner to help develop some special events, and the "Last Dinner on the Titanic" was the first.  It was held on April 8, 2005.

Replica boarding passes were purchased and the names of  actual passengers were written on the back, and mailed to each guest.  Some of the guests researched  the person they were portraying, and were given the opportunity during the evening to  share the information if they chose to.   Guests didn't have to dress in period costume, but many did. 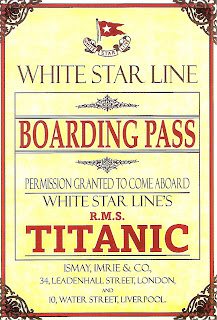 Symbolic gangplank leading to the entrance of the tea room. 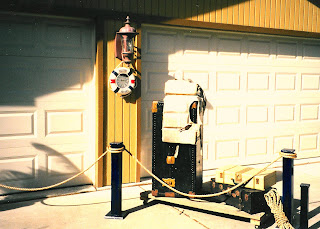 I recruited my son to be our guest speaker, and he chose to impersonate Second Officer, Charles H. Lightoller.

Charles Lightoller greeted each passenger as they came aboard and received their boarding pass.  On this evening, the tea room became the Titanic's First-Class Dining Saloon.   In the "floating palace," as the Titanic was affectionately dubbed, this dining room was 92 feet wide by 114 feet long.  One passenger said it was hard to realize it was not in a large, sumptuous hotel. 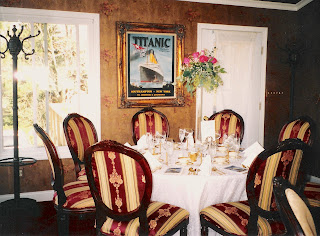 These were the printed menus and programs for the evening.  We served six of the eleven courses that were served at that last dinner on Sunday, April 14, 1912.  [Recipes were in the book.]  This Sunday evening meal was the "most glittering" meal of the voyage.  First-class passenger, Elmer Taylor recalled, "A smooth sea, clear skies and low temperature outside gave the women passengers an opportunity to get out their latest Parisian gowns and their most brilliant jewels..." 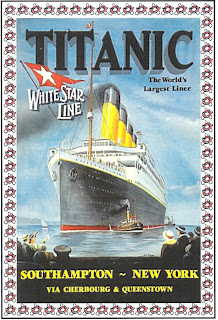 For guests who didn't research their character, a passenger list was available at the end of the dinner so they could learn their age, marital status and whether they survived or perished.   The event, presented two nights, was a sell-out, and was attended by several couples rather than mostly females [a tea room's regular clientele].

The next year when Steve was unavailable, the owner's niece portrayed Molly Brown at an Afternoon Tea instead. 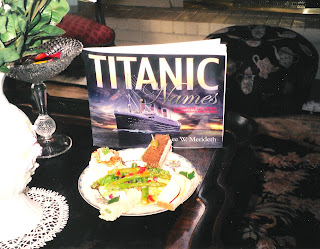 Posted by relevanttealeaf at 12:03 AM