In Washington, MI is a unique house called "The Octagon House."   It's only about thirteen miles from where I live so I drove there over the weekend to photograph it. 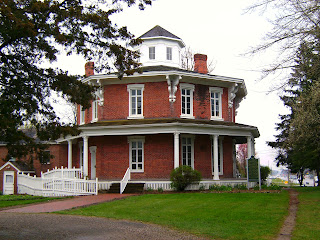 It is estimated that several thousand octagon houses were built in the United States  during the 1800's [mostly in the eastern states], but less than 500 of these rare, Victorian-era houses exist today.

A man by the name of Loren Andrus received a land patent for over 300 acres of property in the 1840's.  A friendly rivalry between him and three other Macomb County pioneering families ensued over who could build the most unusual house.   With the help of his brother-in-law [who was an architect] and a book written by Orson Fowler [the leading authority and promoter of the eight-sided wonder homes] Loren began building the Octagon House in 1858.  He was nearly bankrupt by the time his house was completed two years later, but he won the contest!

Today, 152 years later, a brick engraved with Loren's signature is still embedded in the exterior wall near the front door.   The Octagon House is Italianate in style and is surrounded on six sides by a Corinthian-columned porch.  It has a cedar shake shingled roof, with elegant scrolled brackets which support the octagonal cupola.  The house has eight sides, with eight-foot windows for  lots of natural light during the day.

Between 1894-1945 the Octagon House changed owners nine times.   In 1971 the house was officially listed on the National Register of Historic Places, but in 1974, due to its deterioration,  it was condemned.  Days before demolition, the house was saved and an on-going effort of restoration and care currently exists through a non-profit organization called "Friends of the Octagon House, Inc.". 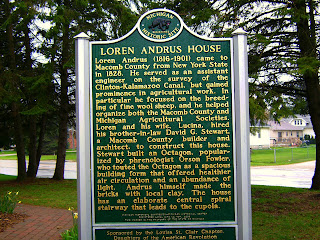 Fund-raiser theme teas are frequently held at the Octagon House and are usually sell-outs.  My girlfriend and I attended a Christmas Tea there in 2005. 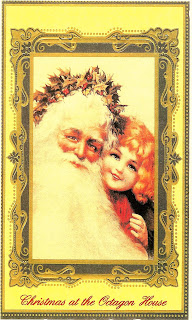 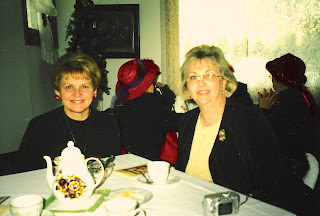 My granddaughter has been learning about the house in school, since it was part of the Underground Railroad, and she's very interested in seeing the inside of the house.   When I saw they will be hosting an antique show on June 9th, I told her we'd go.   After a seven year time lapse, I think it's time I return for a visit. 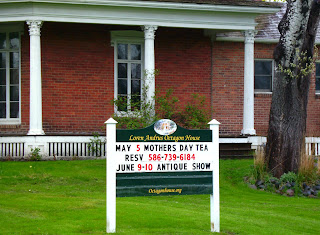 Octagon structures were supposedly less expensive to build, they offered additional living area by using every inch of space, they received more natural light through their multiple large windows, they were easier to heat in the winter, and they remained cooler in the summer.   Anyone for an octagon house???