The Eastern Pennsylvania Region of the Jane Austen Society of North America has designated Saturday, April 28th as their first Jane Austen Day [not to be confused with her birthday of December 16].

When I was in England in May 2001 our tour included a brief stop in Bath where Jane lived for five years when she was 25, but we were there to see the Roman Baths so I didn't get a chance to go to  the Jane Austen Centre.  I'd love to return someday to see the places where England's foremost novelist lived.

I purchased a copy of this familiar drawing of Jane when I visited London's  National Portrait Gallery in 2007. 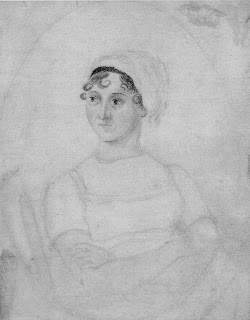 In March 2006 I attended a Jane Austen tea at Sweet Shalom tea room in Sylvania, Ohio where the book, Tea with Jane Austen by Kim Wilson was featured.  The author states tea was one of Jane's favorite rituals.   She was the keeper and maker of tea in her family.  She began her day with tea and ended it with tea.  It was a vital part of her life and writings. 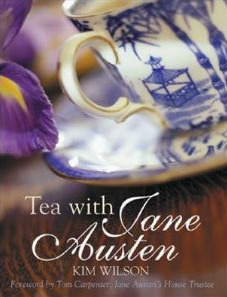 A local library hosted a "Jane Austen and Her World" English tea in September 2009, which I attended with two friends.   A member of the English Royal Society of Authors spoke about Jane's world through the letters she wrote to her sister, Cassandra, artifacts of the time, and photos which included St. Nicholas Church and the Steventon rectory where she was born [her father was the parson], and the cottage in Chawton where she lived when she was 34 and occupied for eight years.

The library staff put together a booklet of recipes which I purchased. 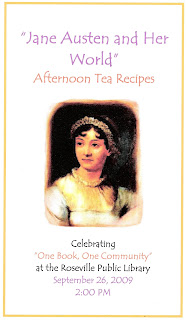 Individual hostesses set tables for the guests attending the tea, and there was a prize for the best table.  The photo below is the table where my friends and I sat. 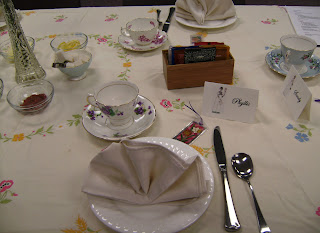 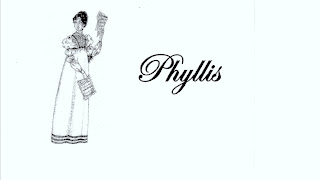 In honor of Jane Austen Day, perhaps I'll watch the  DVD  Becoming Jane - "A Magnificent Journey to the World of Jane Austen."   Although she was never publicly acknowledged as a writer during her lifetime, countless people have been enjoying her novels for almost two centuries!  What a writing legacy she left in her short 41 years.

Posted by relevanttealeaf at 1:18 AM