The Cotswolds and Shelley China

I knew nothing about Shelley fine bone china before 2000.   My girlfriend enlightened me one day while we were antiquing after she had begun her collection of Shelley teacups and saucers.

When my hubby and I were in England in 2001, I purchased my first Shelley "trio" set - a teacup and saucer and a dessert plate.   A printout dated 7/21/2001 in my file indicates I began researching the beautiful china after my purchase. The information [which hopefully is accurate] states Shelley was incorporated in 1925, although family members produced pottery much earlier than that. Shelley's popularity peaked in the 1930's and their potteries ceased production in 1966.    Shelley china is popular and very collectible today.  The plate of Queen Elizabeth II in the photo below is a Shelley, but it was purchased after my trip to England at a local antique store. 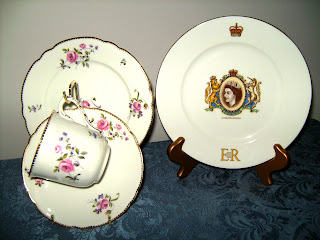 What fun re-reading my journal of our 2001 trip  to England for this post.  We toured some of the Cotswolds.  Cotswold is an Anglo Saxon word.   Cots = safe haven, and wold = gently rolling hills.   We spent an afternoon in Chipping Camden,  where I purchased my Shelley trio set.   "Chipping" is also a Saxon word for market, and in the photo below a friend and I [from Australia who I met on the tour] were headed off to the antique stores! 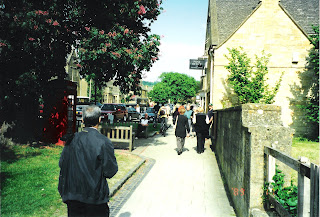 These quaint shops beat going to the mall any day! 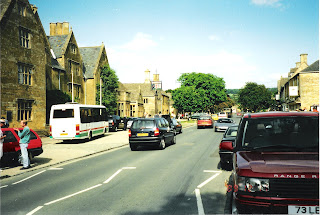 We had a cream tea at a lovely outdoor Cotswold Tea Room called, "Corner's Tea Room and Garden."  The scones with clotted cream and strawberry jam were divine!  My journal reminded me  that I ate two and had to forgo dinner that night! 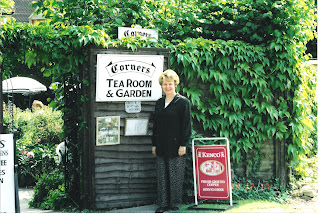 It was a beautiful day and we got to eat outside in the garden at umbrella tables.  The photo below is the owner of the tea room and me. 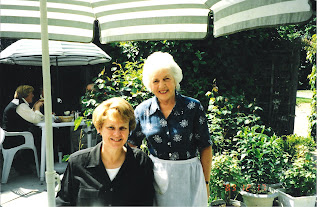 The Cotswold dwellings are beautiful.  Our guide told us they were 16th & 17th century limestone cottages. 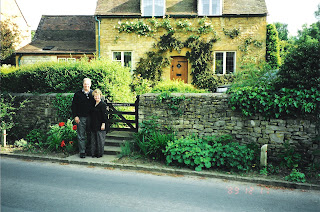 My girlfriend gifted me this past Saturday with the Shelley cup and saucer in the photo below.  Previously, she gave me the trio set and ashtray/trinket dish in the Regency White and Gold dainty shape, which is one of Shelley's most popular patterns.  Don't I have a wonderful girlfriend?  [Actually she was wonderful even before she gave them to me!]  She and her husband had a Shelley booth at an antique mall for a time,  and they have a lovely collection of Shelley china in several patterns and shapes.  She can set a complete table using the Regency White and Gold Shelley dainty dishes, and it's beautiful. 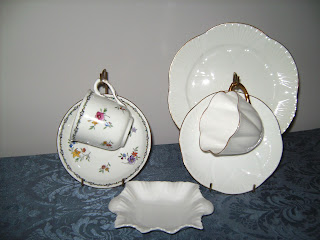 The china in the photo below concludes my small Shelley collection.   I acquired the sugar and creamer at an estate sale, and the "Dainty Blue" dessert plate came from an antique store.  The cup and saucer that matches was a gift from a lady at church one Christmas. 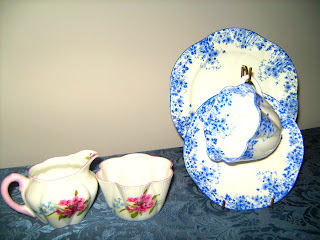 She came to dinner at my house one evening and saw a tray I have displayed in my dining area with the "Dainty Blue" teacup pictured on it, and decided the teacup belonged in my house instead.  I thought maybe she didn't realize what a treasure she had and tried to tell her.  She said she knew it was collectible, but she had enjoyed it for a while and wanted me to enjoy it too. 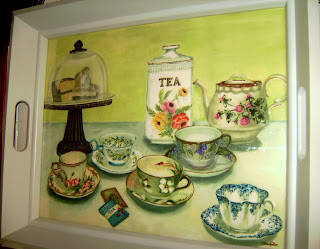 Posted by relevanttealeaf at 12:36 AM