Flora's Tea Room at "The Whitney"

The Whitney changed hands again in 2007.     The Detroit Free Press published an article on August 2, 2007 with the heading: "Elegant Whitney gets a new lease on life.  Detroit favorite, under new ownership since February,  a promising work in progress."
A friend and I went for lunch in October 2007 and were seated in the beautiful first floor Music Room.   The stained glass Tiffany windows  are of St. Cecelia, the patron saint of music, and Apollo and his lyre.  The ornate ceiling, depicting cherubs dancing on clouds, is painted on silk. 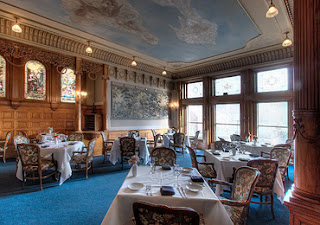 
A Wine Sommelier was hired, but when I asked what tea selections were available the waiter told me there were no "selections" - only Lipton tea bags.  I opted for the Lipton's tea bag.  The presentation was lovely when it was brought to my table - a nice stainless steel teapot placed on a doily lined plate, accompanied with a lemon slice, but it was actually a generic tea bag supplied by King Coffee.   The attention given to tea by such an upscale establishment was disappointing, but my meal was delicious.
My interest in the Whitney family was piqued.  I checked out the book, "The Story of an Abundant Life" - the life of Grace Whitney Hoff, the eldest daughter of David Whitney, from the inter-loan library and enjoyed reading about the family.  Below is a photograph of Flora Whitney, David Whitney's first wife, and mother of his four children. 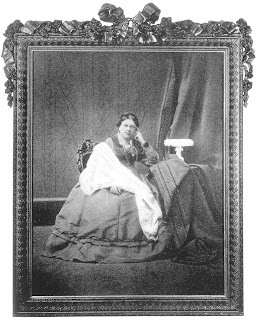 [Photo courtesy of The Story of an Abundant Life.]
I returned to the Whitney for lunch with a girlfriend on December 28, 2007 and again in February 2008 for dinner with my hubby.  Both were pleasant dining experiences, and the generic tea bags were replaced by higher quality tea bags - a step in the right direction!

In September 2009, The Whitney launched a new tea room called Flora's Tea Room, located on the second floor of the mansion, offering two select blends of signature tea, in both decaffeinated and regular.   Excitedly, I  made reservations for a friend [who is a tea room owner] and I to have Afternoon Tea there on January 14, 2010.    Cost was $34.00 per person, all inclusive. 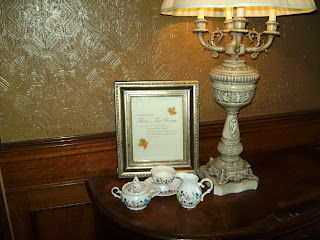 China was hand-painted specifically for The Whitney Tea Room. 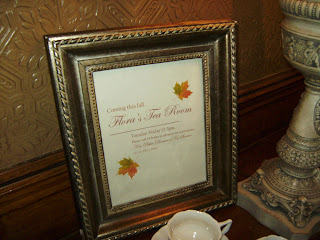 Portrait of Mrs. Whitney in the Tea Room. 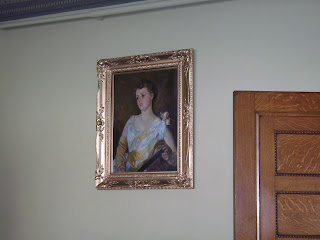 Interior of the Tea Room, which was said to originally be Mrs. Whitney's Bedroom and Dressing Room. 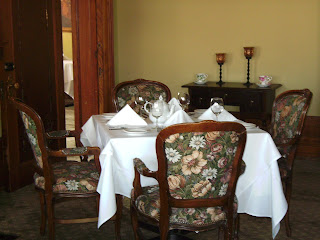 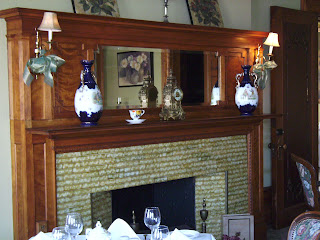 The tea meal began with a roasted tomato bisque accompanied with rolls and butter.  Four savories followed on a rectangle shaped white plate.  Three of the sandwiches were grilled and were excellent.  [1] A shaved prime-rib on a baguette slice [2] A melted brie cheese  [3] A shaved turkey with tomato and bacon on a baguette slice [4] A cucumber and cream cheese on white bread.   I forgot to take photos.   Sorry!
Three small scones followed the savories, with a small ramekin of fruit syrup. 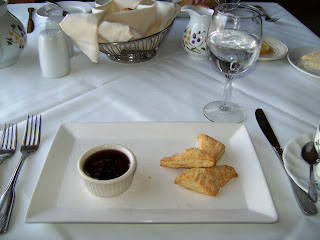 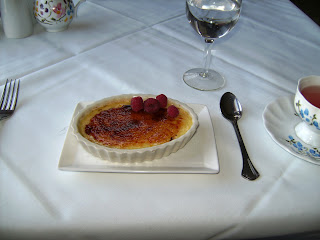 I recently read that they've hired a new general manager, so I think it's time to make a return visit to see what changes [if any] have been made to their tea program.  For a time I heard the tea room was moved down to the first floor, but their website states it's back up on the second floor again.   Their tea service is offered Tuesday - Friday from 12:00 - 3:00 p.m. and on Saturday afternoon by appointment only for groups of 30 guests or more.   Reservations are required for Afternoon Tea, and must be made at least 48 hours in advance by calling [313] 832-5700.  Online  reservations are not available for Afternoon Tea.
More interesting Whitney trivia:
The Whitney was featured as a filming location in the 2012 movie "LOL" starring Miley Cyrus and Demi Moore.
There are rumored occurrences of supernatural activities on all three floors of the mansion.   The causes of these events are linked to the fact that both Mr. & Mrs. Whitney died inside the mansion, and some believe that  Mr. Whitney's ghost  still occupies the house!
David Whitney,  Jr. was friends with J.L. Hudson [founder of Hudson's Department store].  Mr. Whitney loaned J.L. Hudson money to build his first department store in Detroit.  When Mr. Whitney passed away, Mr. Hudson was a pallbearer at his funeral.
The original electrification in the house was done by Thomas Edison, also a friend of David Whitney's.  Years later, a Detroit Edison lighting expert said the 1893 lighting was "remarkable in its foresight."
Posted by relevanttealeaf at 12:16 AM