On June 28, Marilyn at Delights of the Heart,  wrote a post about transferware, and she shared a photo of  a transferware teapot she had recently acquired.   I wrote a comment on her blog that in my entire dish collection, I didn't have a single piece of transferware.    Or did I???

A couple of days before Marilyn's post, my son and hubby were on a "guys trip" to Washington D.C., Maryland and Pennsylvania.  On the last leg of their trip they stopped in Gettysburg and went to the Civil War Headquarters of General Robert E. Lee. 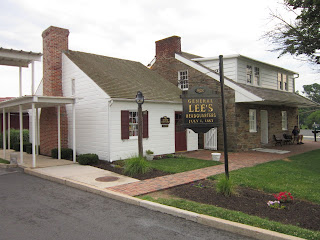 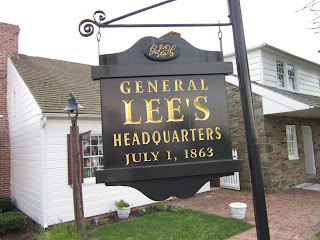 At the gift shop my hubby bought me a teapot and teacup as a souvenir. 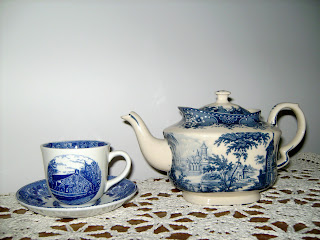 The cabin pictured on the teacup is General Lee's headquarters.  The backstamp reads Old English Staffordshire Ware, Made in Staffordshire, England.   The teapot  comes from Madison Bay Company in East Berlin, Pennsylvania - a wholesale antique reproduction company, so it's not authentic/vintage even though it looks like it.

My new acquisitions sent me on a search through my china cabinets and cupboards, and I found I DID have some transferware after all!   The Blue Willow plate is backstamped Booths, Made in England, and the Sadler Blue Willow teapot is made in England as well. 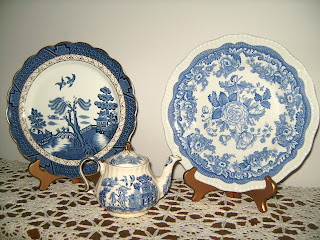 Do you know the story/legend behind the Blue Willow Pattern?   [Abbreviated Version]


Knoon-shee, a lovely Chinese maiden, bestowed her affections upon her father's secretary, Chang, but she was commanded by her parents to wed a wealthy rival suitor.

She refused to comply with their wishes, and her enraged father locked her up in a house. She found a way to send a message to her lover, 'Gather thy blossom, ere it be stolen.'   Emboldened by the message, Chang succeeded in entering the apple orchard and carried off his beloved. They are seen hurrying over the bridge. Knoon-shee with a distaff, and Chang carrying her box of jewels, while the angry father follows after them armed with a whip.


The couple escaped in the 'Chinese ship sailing by' and landed on an island, where they took refuge in a little wooden house. But the father and the wealthy, discarded suitor tracked them down and set fire to the house while they were sleeping, and the lovers perished.

Next morning, from the ashes rose their spirits, in the forms of two doves. They are pictured with out-stretched wings flying off to the realms of eternal happiness.

The Spode dish was a gift from a friend several years ago.   It is backstamped The Spode Blue Room Collection, Regency Series, 'British Flowers', Made in England.   The pattern was  introduced in 1828.

My favorite plate, though not vintage transferware,  is one I acquired from Denise LeCroy at Uniquely Tea.   She had two and was willing to part with one.   It is made by Mason's in Newcastle Upon Tyne, England.  Mason's is the company that patented the term "ironstone." 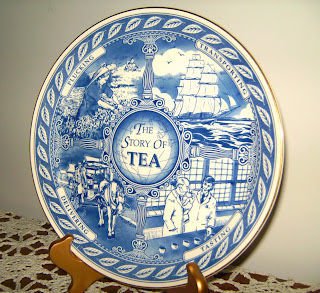 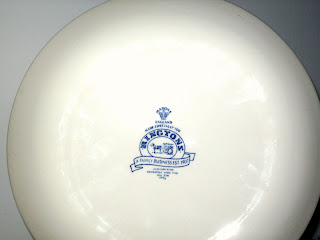 A few years ago I was the recipient of a Rington's Tea Chest for Christmas.   I love the connection between the plate and the chest. 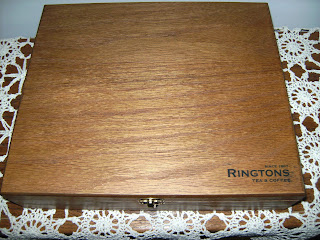 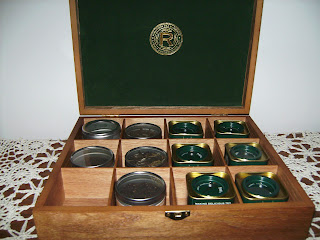 The family company has been in business since 1907 and still makes home deliveries!   Denise also did a post about Rington's, but I couldn't find it in a quick search.

Posted by relevanttealeaf at 12:10 AM