The fourth annual District Ladies' Tea took place on July 24, 2010, with the theme, birds.   I concluded if our Lord used birds as illustrations in His ministry, then they'd be great for us to use in women's ministry too!

The theme was based on Jesus' words in two Scripture references:  Matthew 6:26  "Look at the birds of the air; they do not sow or reap or store away in barns, and yet your heavenly Father feeds them. Are you not much more valuable than they?"  Matthew 10:29-31  "Are not two sparrows sold for a penny?  Yet not one of them will fall to the ground apart from the will of your Father...So don't be afraid; you are worth more than many sparrows."


It's hard to pick a favorite when so much time and energy has gone into the planning of multiple teas, but I have to say this theme was my favorite of the four teas that I coordinated for the district.

The tablecloths and napkins were  "robin egg blue,"  with white placemats.  A rubber stamp depicting a sparrow was used to decorate the lower corners of each placemat. 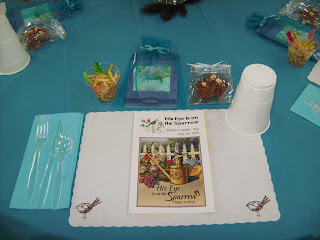 After using croissants for the three previous teas, I was ready for something different - ham salad on a bed of lettuce with a large tomato slice and marinated cucumber slices, with a deviled egg and bird biscuit.  The pizzeria switched from  clear plastic flip-top lidded box containers for their anti-pasta salads, to clear plastic bowls, so I took what was available.  It worked fine and actually gave a new look to the pre-assembled meals.   In keeping with the theme,  a cup of "nest building" potato sticks with a few gummy worms mixed in was at each place setting.   After all, birds do eat worms!  ;-)  Dessert was Chocolate egg nests.   The beverage was iced tea [sweetened and unsweetened] and, carafes of ice water were placed on every table. 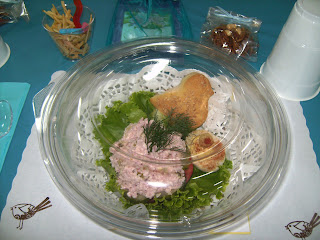 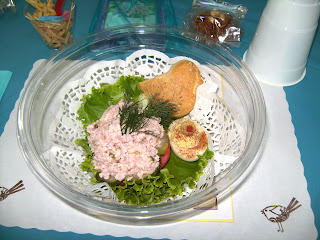 Pillsbury Grands were used to make the bird biscuits.  I sprinkled them with sesame seeds, but I've seen them sprinkled with either poppy seeds or parsley flakes. 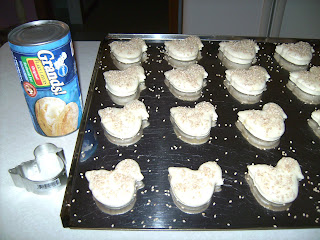 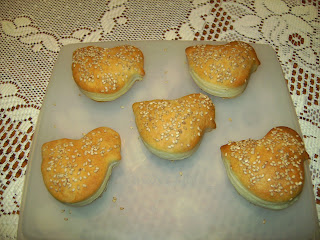 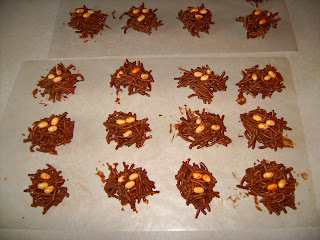 Packaged and ready for the tables! 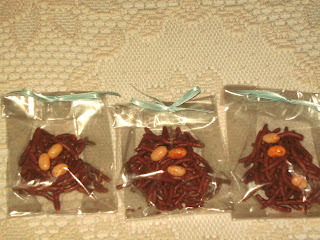 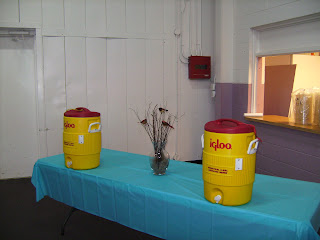 The vases came back for a third year, with an entirely different look.  They were filled with moss and branches to which imitation birds had been hot glued onto.  Feathers were scattered at the base of the vases.  Each lady received a devotional book in a blue drawstring bag as her favor. 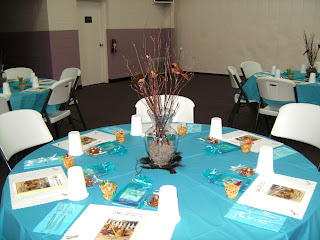 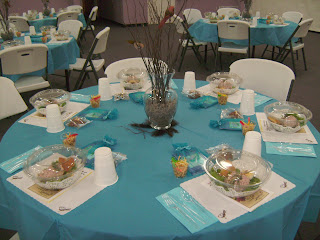 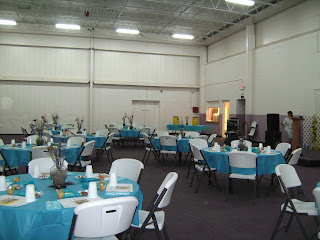 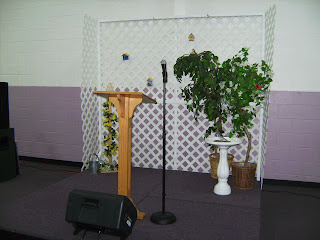 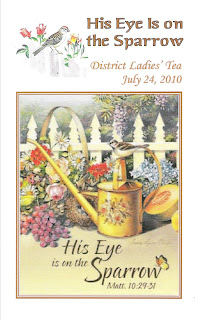 "Faith is a bird that feels dawn breaking and sings while it is still dark."
~ Rabindranath Tagore


The soloist was Karen Payne.  When the Women's Ministry Director talked to her about  coming, she said almost as an after thought, "By the way, our theme is birds, do you know the song, 'His Eye Is On the Sparrow'?   We'd like you to sing it."  Karen responded, "DO I KNOW THE SONG?  I'll tell you about it when I come."  None of us knew the personal significance that song had to Karen, and how it had become her personal testimony until the afternoon of the tea.

Karen had been widowed four years earlier when he husband died from cancer.  When she crawled into her big, empty, lonely bed the night of his funeral, she said she sensed God saying, "Karen, sing to me."  She replied, "I don't have a song in my heart tonight, God.  You know that it's been a very rough day."  But He persisted, "Sing to me anyhow."  She asked, "What song should I sing?"  "Sing, 'His Eye Is On the Sparrow.'"  Reluctantly she began to sing, and when she finished a calmness settled over her enabling her to close her eyes and drift off to sleep knowing God's watchful care and comfort would be with her.  She said she's had to sing the song many, many times since that night to remind herself of God's promise, but He's been faithful to help her through all her difficulties.  As we listened there was barely a dry eye in the room! 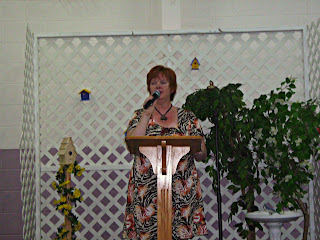 He Who Feeds the Sparrow

He who feeds the sparrow
and guides the robin's flight,
Will raise the sun tomorrow
and light the stars tonight.


His love for us is endless;
His hand can calm the sea.
He who feeds the sparrow,
still cares for you and me.


He showers us with blessings
that we might see and learn
Asking only that we listen
and love Him in return.


He who feeds the sparrow
and guides the robin's flight,
Will guide my path tomorrow
and give me peace tonight.


On the lighter side... I came up with the following phrases pertaining to birds.  Can you think of any I've missed?
A bird in the hand is worth two in the bush.
The early bird gets the worm.
For the birds. [absurd, ridiculous]
The birds and the bees.
Feather your nest.
Birds of a feather flock together.
Nest egg.
Goose egg.
Good Egg.
Bad Egg.
Egg Head.
Feather in your cap.
Got his/her wings clipped.
You can't stop the birds from flying over your head, but you can keep them from building a nest in your hair.
﻿
﻿

This concludes my series on casual tea parties.  I hope I've been able to convey that fine china, linens and exquisite silver aren't always necessary in order to enjoy the spirit and essence of tea time.

﻿
Posted by relevanttealeaf at 6:30 AM

Email ThisBlogThis!Share to TwitterShare to FacebookShare to Pinterest
Labels: His Eye Is On the Sparrow Tea