One of tea's many attributes is its versatility.   A tea party can be as formal or as informal as you choose to make it, without altering or compromising tea's soothing and civilized virtues.


In 2007, the Eastern Michigan District Superintendent's wife [of my church denomination] contacted me about coordinating a tea for the ladies attending July family camp.   There were all kinds of activities scheduled for the men, teens, and children, but nothing for the ladies.  I consented, and began planning a tea geared to a campground setting, held in a building not usually associated with teas - a gymnasium!  My responsibilities were determining a theme, tablescape, and menu, as well as purchasing and food prep. 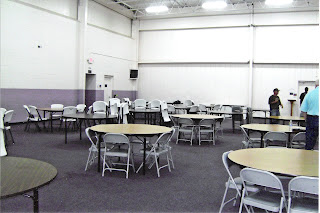 I decided on a picnic theme knowing ladies would be attending in casual attire, in addition to the informal, non-traditional type of building we'd be occupying.   Cheerful, casual, silk sunflowers in wicker baskets were the centerpieces, with yellow disposable tablecloths and plastic silverware, and green place mats with sunflower napkins completing the tablescape.  Teacups gave way to Libbey drinking jars with a sunflower blossom placed inside of each.  The drinking jars later became a favor for the ladies to take home.  [No dish washing! ;-)]   I set one table as an example and a group of volunteers did the remaining tables. 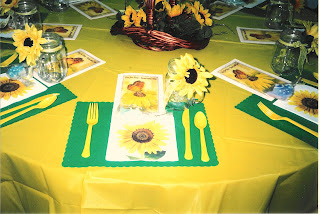 With a little creativity and some aesthetics, isn't it amazing how a gym can be transformed? 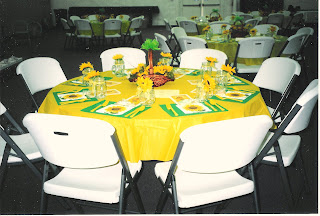 Then it was into the kitchen to line 72 large, clear plastic carry-out containers with white paper doilies, and begin assembling each lady's tea meal.  The meal consisted of a freshly baked raspberry scone [purchased from a bakery] a jar of jam, a chicken salad croissant, and a fresh fruit cup.   Individual lemon tarts and cellophane wrapped, decorated, teapot sugar cookies were at each place setting.   The food containers were placed on the tables just prior to tea time, and since they were pre-assembled, serving was a breeze. 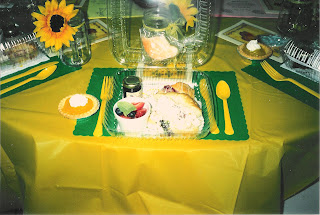 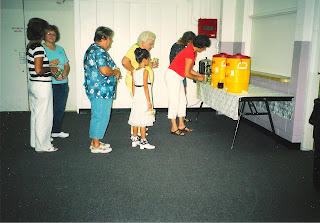 As you can see in the photo below, the ladies are enjoying their tea-time picnic! 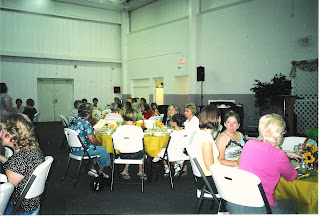 The Women's Ministry Director and Council were responsible for the program and decorating the speaker's stage.  They also had oversight of reservations and collection of money - $12.00 per lady.  The program was Tea for Two - Jesus and You!  Like a teapot filled with God's love, we are to pour out His blessings and love on those around us. 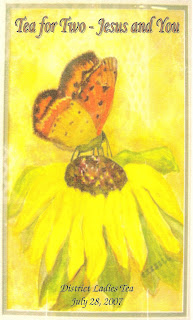 There were tea gift drawings, and a sing-a-long with fun songs from the past. 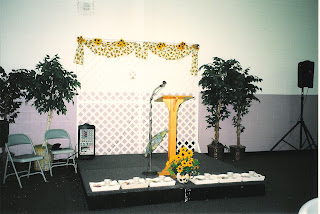 Abigail, the sweet little girl pictured below, sang "When You Wish Upon a Star" and "Oh, You Beautiful Doll." 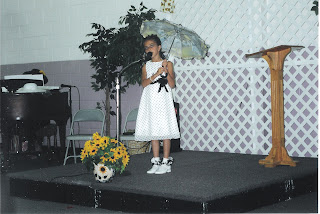 Since everything was disposable, clean-up was minimal and quick - a real plus when you're weary from executing such an event.   I did three more teas at the campgrounds in 2008, 2009 and 2010 [which you will read about in future blog posts this week].   Then I passed the baton to someone else.

Email ThisBlogThis!Share to TwitterShare to FacebookShare to Pinterest
Labels: A Picnic Tea