Before I headed off to Memphis, Tennessee in mid-July, I had one post left in my Tea Journey series.  Today's post, "A Cup of Christmas Tea" at Ardmore Park Place, will conclude the series.

With December's tea, I knew the fallish-looking amber Tiara teacups would have to be packed away and new ones purchased.   December's teacups came from  Direct Floral.   I had used the company for my church teas and was pleased with their products and service. Their affordable ceramic teacups [about $2.00 each] are available in different styles [including Christmas], so I ordered a case of 36, as well as larger planter teacups for centerpieces.   As a side note,  for one of my church teas I  used them as functional  teacups in the tablescape, and for another I used them as a serving vessel for dessert - a decorated poinsettia cupcake was placed inside.   In both teas, the ladies took the teacup home as their favor.

Miniature poinsettias were the perfect size to transplant into the teacup planters with the addition of a Christmas floral pick.   I gave my girlfriend one of the centerpieces to take home after the tea, and her poinsettia is still thriving over a year and a half later! 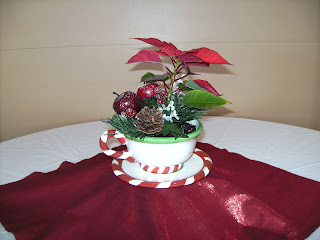 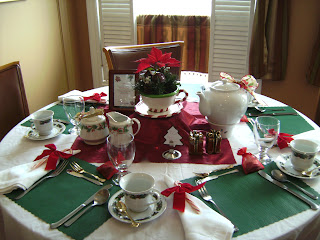 Thinking I'd use these teacups again another Christmas, I didn't give them as favors this time.  The favors were a red nylon bag with a Harney & Son's Holiday Tea sachet enclosed, and the candy cane that decorated their napkin. 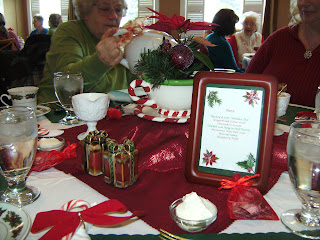 
I was especially happy to find a local women's newspaper that advertised the tea in their calendar, free of charge.  Free always works for me!  ;-) 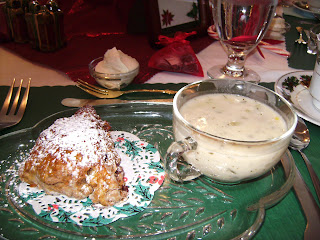 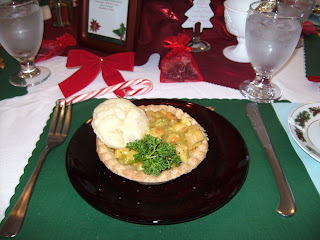 A few years ago at Christmas time Target sold burgundy glass-colored dishware.  I purchased enough for family use, and then prior to the Christmas tea at Ardmore was able to find more at an estate sale.   Between the two there was enough for my tablescapes. 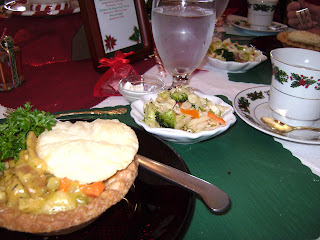 I visited many thrift stores to obtain parfait glasses for the raspberry trifle.  The search was worth the presentation.
﻿ 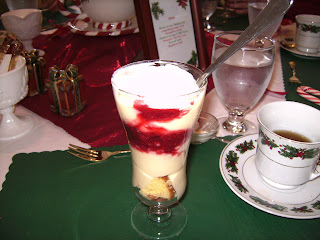 It wasn't a sell-out tea, but a pleasant group of 20 ladies. 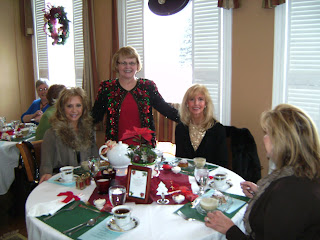 The program  was simple.   I shared a few tidbits about the Boston Tea Party since the historic event transpired in December.   The centerpieces were poinsettias, so information was shared about  their origin, their name, and the legend.   In my research I learned something new myself - from a Christian perspective, the five points on  Poinsettia blooms signify the Star of Bethlehem, and the bright red color is symbolic of Jesus' blood and crucifixion. 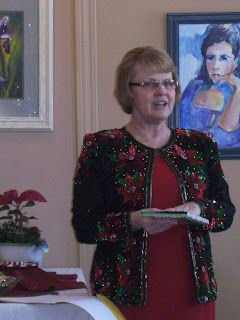 The program concluded with the reading of Tom Hegg's book, A Cup of Christmas Tea.

The sign-up for the January 2012 tea was low, so the owners decided to cancel.   I respectfully disagreed, feeling the cancellation would hinder  the ongoing progress of the tea program, implying that we weren't serious in our undertaking, and  on again/off again scheduling would be confusing to patrons.   It  also conveyed to those who had signed up that their reservations were unimportant - that it was more about numbers than service.    The cafe/restaurant  was still open and staffed, so why not proceed?  The owners didn't share my viewpoint, and unfortunately December's  tea was their last one.


I  hosted the January tea in my home [identical menu and program that had been publicized] for those who had signed up.   The tea had been planned a month in advance, so I already had everything I needed [favors, centerpieces, and dishware].


I enjoyed my brief time at Ardmore and am grateful for the opportunity and experience it provided.   I met some wonderful ladies and still keep in touch with some.  As with any venture, it was a learning experience.   I wouldn't enter into another arrangement like it again without a time commitment from the management.   It takes more than four teas to develop a tea program, and fluctuating attendance is a given.  It was unfortunate that the tea program ceased before it had an opportunity to become established, but every journey has bends in the road.  While the Ardmore teas were suspended, my tea journey and the search for new opportunities to share my love of tea continues.

Posted by relevanttealeaf at 11:25 AM