As you have discovered, I like dishware.  A couple of years ago I started collecting  dishes made by Federal Glass in the "Petals" pattern.  They come in clear and iridescent glass, gold, smoke, blue, and carnival iridescent.  My collection only consists of the clear glass.   The pattern is supposed to represent the petals of a sunflower, but I think the dishes resemble stars, so I've always used them within that context for my tablescapes.

The dishes were made between 1954-1979.  My mother had several pieces when I was growing up, but they were long gone by the time I started my collection.  It's fun that they have a memory connection to my childhood.

While browsing in an antique store last week I spotted a luncheon/salad plate for only $6 and I was happy to bring it home.   This size is the most difficult to find - at least in my area. 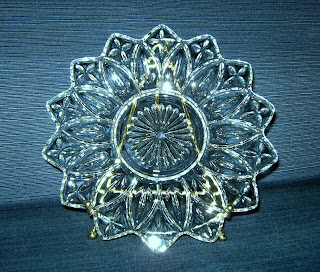 If I were doing a Titanic tea this year, I would use my  glitzy, elegant-looking petals dishes  to parallel the opulent glamour of the First Class passengers the night of April 14th, before their peril.  The dishes also elude to the icy waters of the North Atlantic, and the starry sky at 11:40 p.m. when the ship fatally struck the iceberg and foundered in less than three hours.   Respectfully remembering all who perished.

Following are photos of teas using my petals dishes combined with  blue Moderntone Depression Glass dishes by Hazel Atlas.  The first was a 2010 Epiphany tea for my neighbor ladies, where the star theme was symbolic of the star in the east that led the wise men to the Christ-child. 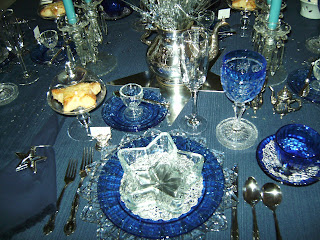 A year later I gave a tea for some friends using the same tablescape with the theme, "Follow your star [dream]  in 2011." 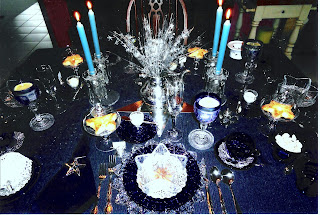 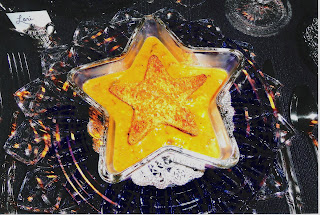 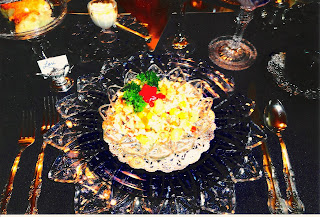 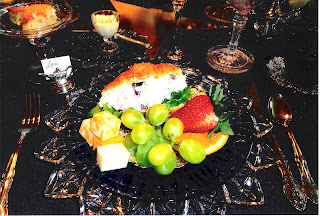 For a June 2011 birthday tea I used the the petal dishes as patriotic stars, since my friend's birthday was between Memorial Day and the Fourth of July. 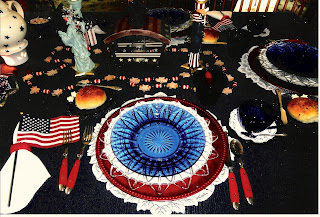 The star bowls came from the dollar store and were perfect for the chilled strawberry soup. 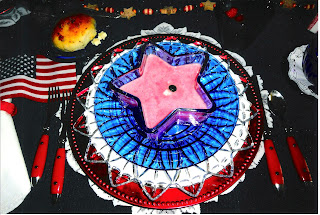