Life after the Southern Tea Trip

Being home five weeks while blogging about the tea trip, means a lot of activities took place that I didn't write about.  So now I'm catching up.  The first thing was to try to shed some pounds!  We all ate far more 'on the road' than we normally eat at home, and tea fare is not calorie friendly - especially ten days of it!

I went through the three cookbooks I purchased on the trip [Mary Mac's, Mrs. Wilkes' and Charleston Receipts] in search of some low calorie, healthy recipes.

After reading up on beets and discovering how healthy they are, I bought some at the produce market and prepared them for the first time! There's more than one way to cook them, and I opted to roast them in the oven.  They were great in our salads, which have been high on my menus. 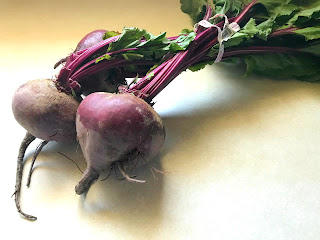 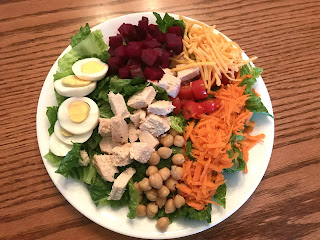 Okra was another new vegetable to prepare.  I roasted it in the oven as well because I read it won't turn slimy [as okra can do] when it's roasted.  I prepared it for Laura Hipp's Okra Soup, and it was all I could do to not eat it all right out of the oven.  We really liked the soup and it's on the menu for dinner again tonight.  I'll try to remember to take a picture. 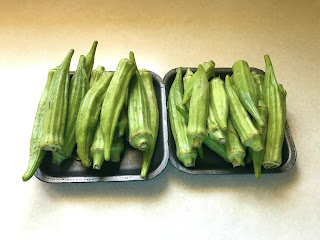 Ladies Bible study was scheduled for June 12th, and I wanted to keep that menu lite as well. When four of us ladies traveled to Pennsylvania in 2016 I bought a beautiful Hammersley bone china strawberry basket at an antique store. I decided this was the perfect time to use it.  Fresh strawberries with angel food cake. 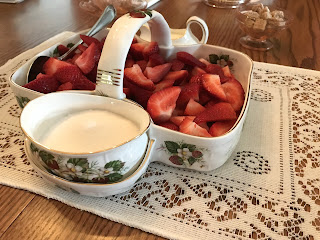 I served it with Coconut Almond Truffle black tea by Tealightful Tea. 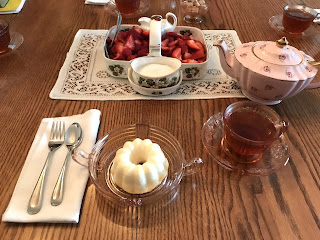 Lori gifted me with the tea on our recent trip, and I was anxious to try it. 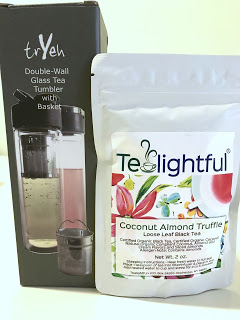 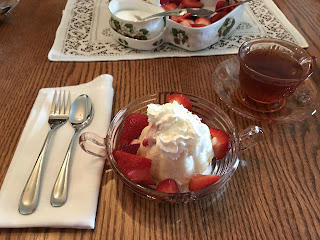 I wanted to use my china strawberry basket because shortly after we got home from the trip,  I was going through the listing of estate sales and looking at the accompanying photos, and I spotted another Hammersley berry basket in the Victorian Violets pattern.  Lori loves violets and she had a June birthday, so this basket was the perfect birthday gift [even though she says no gifts].  You don't see the china baskets often, so it was worth the pursuit.  My hubby and I were among the first group of people admitted into the house and I went right straight to the formal dining room and saw it sitting on a shelf.  It had Lori's name written on it, and it came home with me.  It was so much fun to surprise her with it! 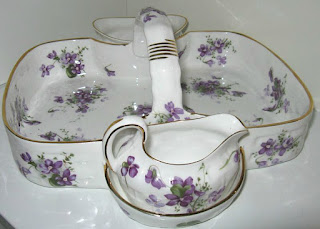 The estate sale write-up said it was the home of a retired G.M. executive who had traveled the world.  There were lots of Russian items in the pictures including a large and small Lomonosov teapot, sugar and creamer in the Cobalt Net pattern.  I have a teacup in the pattern, but never thought I'd ever acquire the tea set.  While I was getting the berry basket, Jerry found the tea set and held onto it for me.  It didn't take much deliberating to decide it was coming home with me too. 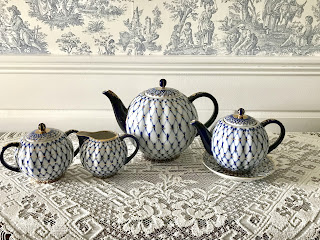 It meant taking some things off a shelf in the living room to make room for it, but it now has a happy new home. 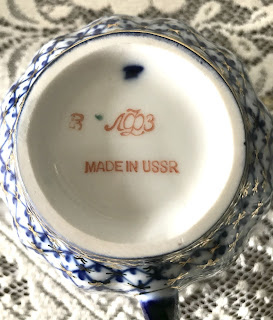 It looks lovely sitting next to the two trios from the Empress Hotel in Victoria, British Columbia. I would call it my 'international' shelf, but most of the other china is from England, so the majority is international. 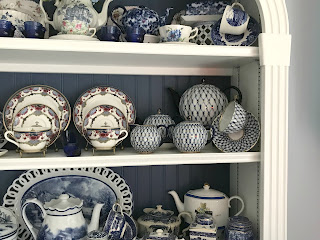 We came home with a feeling of 'mission accomplished', and declared it a productive day!

Posted by relevanttealeaf at 11:14 AM