After breakfast on Saturday my hubby and I headed to the Utica Antique Market on 21 Mile Road east of Van Dyke at the K of C Picnic Grounds. It's the largest outside show in Southeastern Michigan with 100 different dealers. It's held one weekend in May, July, and September, and has been happening since 1986.

The temperature was hot on Saturday, but the cloud cover made it manageable.   When we arrived around 11:00 a.m. there were already lots of shoppers. 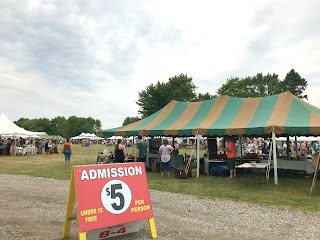 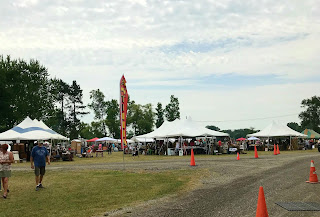 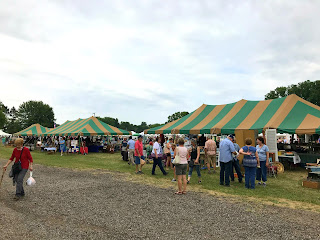 Can you believe, with all those vendors I came away without making a single purchase!  I saw a black and gold teacup that I pondered, but the saucer had several scratches so I left it behind.  I also saw a box of ladies nylons from J.L. Hudson's department store, but since I already have a box I passed on those too.  It was fun looking even if I didn't buy anything.

The highlight was meeting one of my blog followers who was camera shy.  Vivian recognized me from pictures on my blog and stopped to introduce herself.  Thanks, Vivian!

Sunday was a Japanese tea tasting at Tea Haus in Ann Arbor, MI. 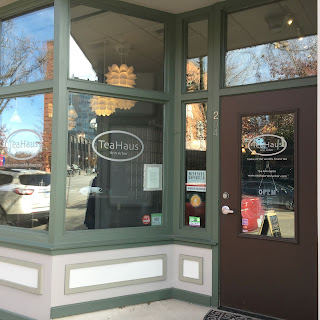 Shiga is a 'Sister State' of Michigan/Ann Arbor.  It is a prefecture [a district under the government of a prefect or magistrate] in Japan, east of Kyoto.

Lisa McDonald, owner of Tea Haus, traveled to Shiga in May and shared her experiences and some of the teas she brought back at a tea tasting yesterday.  She spoke to a tearoom filled to capacity, and was so interesting and informative.

Lisa received her tea sommelier training in Europe [Germany], and she's probably the only one in Michigan to do so.  Her certification took two years of classroom training and two years of apprenticeship. 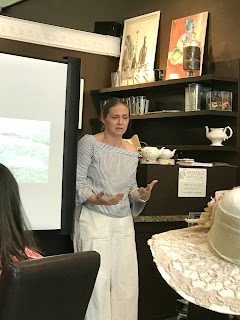 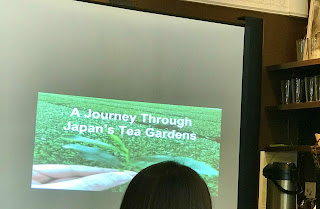 She shared that the Japanese brew their tea stronger than we do in the States, but they drink it in smaller vessels - not large mugs like we often use.

The first tea we sampled was a first flush Sencha, very freshly harvested.  It was excellent, as were all the teas we sampled.  It was mild [not a strong grassy taste].  The color was a pale, clear greenish-yellow.  The color confused me because when I ordered Sencha tea at the Asian restaurant recently [I blogged about it on 7/11] the brew was very green [the color of Matcha] and opaque.  I saw the pyramid tea bag which definitely contained green tea leaves, not Matcha powder, so now I can't help wondering what tea I drank??? 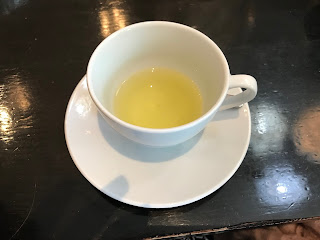 Roasted chickpeas were served with the Sencha.  They were roasted with olive oil, salt, garlic and green tea and were very good.  Crunchy similar to a peanut. 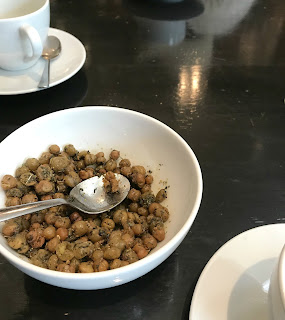 Lisa told us that while some teas in Japan are still plucked by hand, 75% is mechanically harvested.

Tencha green tea is the base used to make Matcha.  She told us a lot of tea being sold as Matcha isn't really authentic Matcha - it's other grades of green tea ground into powder.  ;-(

The second tea we tasted was Kukicha - a toasted tea made from stems, stalks, and twigs.  It had a greenish-brown color. 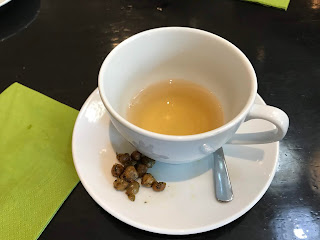 It was served with Kukicha Panna Cotta over Strawberries.  Yum!  All the food we sampled was made in-house at Tea Haus' sister business - Eat More Tea. 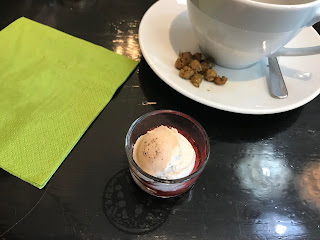 The third tea we sampled was Bancha, second flush.  I didn't get a picture of that tea.  I guess I was so busy enjoying the Soba [buckwheat] noodles topped with an Egg Pancake that I forgot! Bancha is the lowest grade tea on the market in Japan, and is a popular tea consumed daily. It's made from mature tea leaves and stems from the autumn harvest.  [It's plucked later than Sencha].  It's taste was more vegetal than the Sencha but still good. 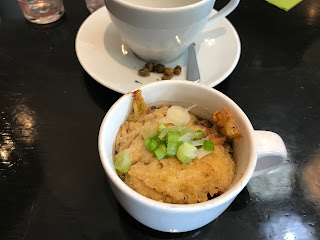 The fourth tea was Gaba which is cured in nitrogen chambers.  It is said to give a mellow boost of caffeine.  The tea undergoes a special oxygen-free fermentation process.  This tea was served with a Matcha Gelato and Chocolate Truffle. 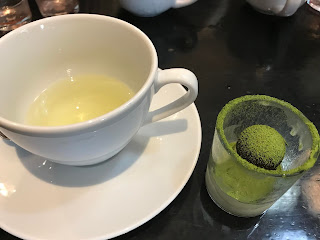 One of the tea farms Lisa visited was high up in the mountains, where she said the age of the pluckers was 72 and older.  The area was not a place where younger girls and women wanted to live.  Consequently 2/3 of the tea grown in that area that could be picked, goes unpicked.

The last tea to sample was a black Gyokuro - which I forgot to photograph.  It was deliciously smooth and mild - maybe my favorite of the five, but they were all good.   Black tea is not dominant in Japan, and Lisa said black tea is processed only every 3-5 years.

She showed us a photo of the first Tea Garden in Japan.  It wasn't large, but it was beautiful. 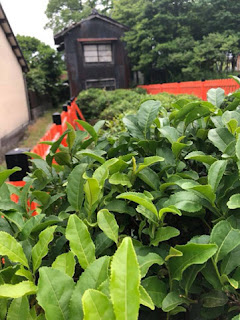 The event was $28 per person and well worth it.  Tea Haus is located at 204-206 N. 4th Avenue in the Kerrytown District of Ann Arbor.  Lisa has been selling quality teas at Tea Haus for 11 years and has a wall of approximately 180 tins of teas to choose from.  If you like quality teas pay her shop and café a visit. 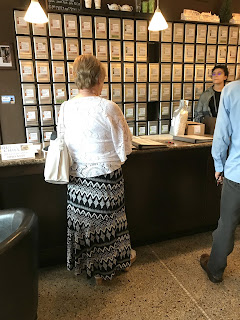 If you recall, the first night of our Southern Tea Time Getaway we had a fun gift exchange. Barb told me she had something for me but it was too bulky to tote around in the van. Yesterday was the first I had seen her since the trip, and she gave me the gift then.  It was packaged in a lovely pink, Parisian case. 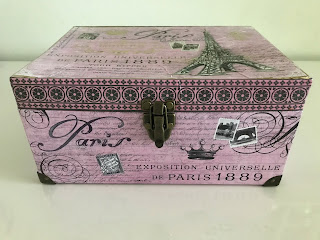 Inside was a beautiful Lenox Butterfly Meadow tea set.  Thank you so much, Barb! 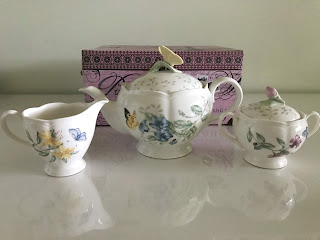 As you can see, it was a very nice weekend!  Now a new week unfolds...

Posted by relevanttealeaf at 4:30 PM