It seems I just get one month's presentation completed and it's time to begin working on another one.  Last month's theme was In the Good Old Summertime.  The residents all remembered the 1949 romance/musical movie with the same name that starred Judy Garland and Van Johnson, and they remembered the words to the song that was written in 1902.

You can't talk about summertime without including ice cream.  The first advertisement for ice cream in the United States appeared in the New York Gazette on May 12, 1777, but until the early 1800's it was a rare and exotic dessert enjoyed mostly by the wealthy.  Thank heavens for the hand-cranked ice cream freezer that a woman named Nancy M. Johnson patented in 1843.

Ernest Hamwi laid claim to the invention of the ice cream cone in the U.S. at the 1904 World's Fair in St. Louis.

I always take the residents a treat, so marshmallow filled ice cream cones were perfect. In Romeo, MI there's a Frontier Town with a Country Store that sells all kinds of hard-to-find candy, including the marshmallow ice cream cones.

The owner told me the barn that houses the Country Store was built in 1863.  Originally it was on the opposite side of Van Dyke Ave. and they moved it across the street to its present location in 1961. 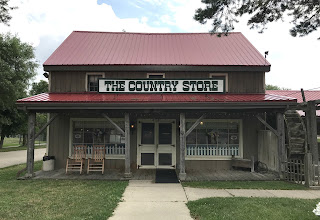 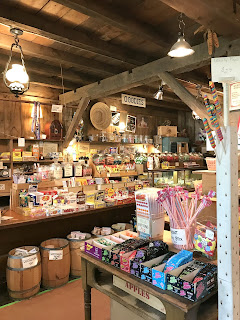 They carry lots of candies from times past.  It's a fun place to go. 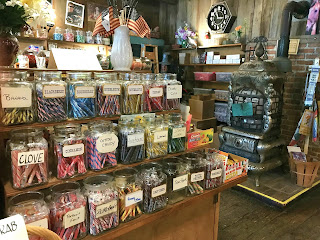 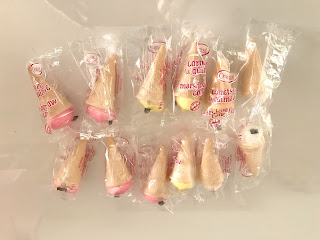 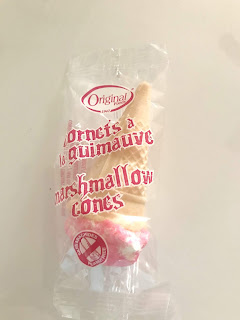 It was also at the 1904 World's Fair where iced tea was popularized by Richard Blechynden, the Director of the East India Pavilion.  In the summer heat the crowds didn't want to drink his samples of hot black tea from India, so he iced it and it became a refreshingly cool success! 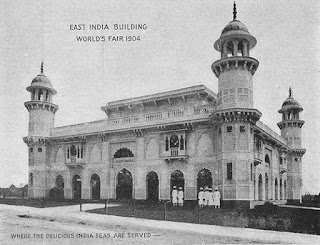 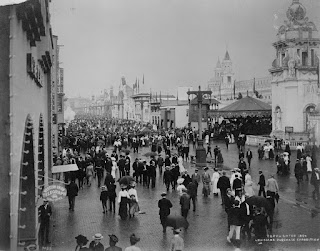 In Michigan, Detroit Tiger baseball is a summertime favorite, and we talked about Detroit's amusement parks of the past - Edgewater, Walled Lake, Jefferson Beach, and Bob-Lo Island. Picnics at the park and family reunions are also fun summertime activities. It was a fun walk down memory lane for the residents.

Now I'm working on my presentation for July 29th - Rosie the Riveter.  I ordered a polka-dot bandana and Buttermint Cream candies for the residents.  Did you know the polka-dots were originally white cannon balls printed on red bandanas? 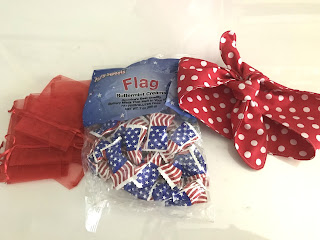 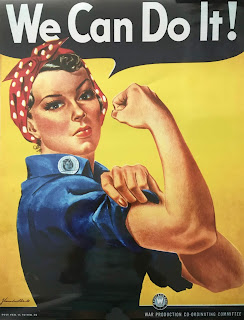 In 2015 I toured the Michigan Historical Museum in Lansing with granddaughter, Izzy, and we had our pictures taken in the poster with a cut-out for our face. 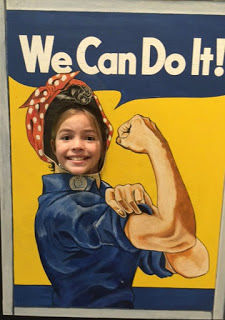 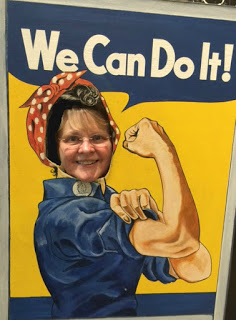 Rosie stickers to go on the candy bags came in today's mail. 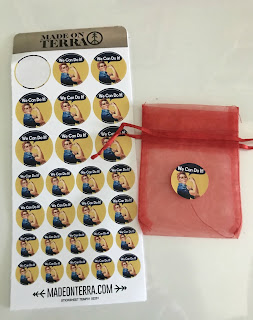 I'm especially enjoying Penny Colman's Rosie the Riveter book that I ordered from Amazon.  The cover is Norman Rockwell's painting that appeared on the cover of the Memorial Day 1943 issue of Saturday Evening Post.  His 19-year-old neighbor, Mary Doyle Keefe, posed as his model.

Keefe said the red hair and facial features were all that resembled her petite, 110-pound frame. Her arms, hands, and broad shoulders looked more like they belonged to boxer, Jack Dempsey! Twenty-four years later Rockwell apologized for the hefty body he gave her in the painting. 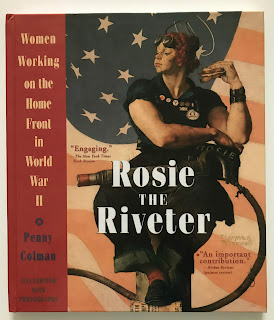 The war brought shortages and rationing of many things including tea [and coffee].  The ships that ordinarily transported these goods were now carrying American troops, so all the Rosie's [and everyone else] had to limit their tea consumption.

I'm loving this Rosie research, and have begun putting my script together.  Did you know there's an American Rosie the Riveter Association that was founded in 1998?  They have over 4,000 members, and their honorary headquarters is at Franklin D. Roosevelt's Little White House and Museum in Warm Springs, Georgia.

Granddaughter Isabella comes Thursday to spend a few days, so I hope to have my presentation finished by then.  I've got some fun activities planned for her visit.

What have you been doing to fill your summer days?

Posted by relevanttealeaf at 12:33 PM