Saturday with the Grands

My hubby and I went to Chelsea on Saturday to stay with "the Grands" while our son and daughter-in-law went to a wedding in the evening.

Their mailing address is Chelsea, but their house is in the country.  It's beautiful in the summertime when the trees are fully "dressed" in their greenery. Below is the road their house is on.  Isn't it picturesque? 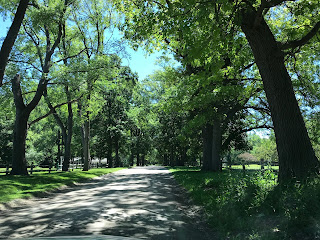 Their neighbors [within walking distance but a large space between them] went on vacation and Izzy is tending to their two cats while they're away.  As part of her compensation she and her family can use their pool whenever they want.  So swimming was on the agenda Saturday. 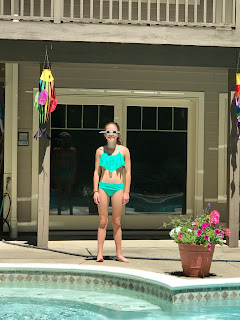 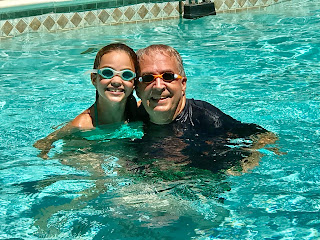 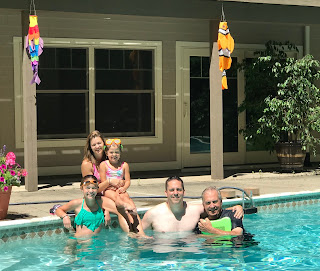 Grandson, Landon, is missing from the photo because he was at his cousin's house.  I'm not a water or sun person, so I stayed in the shade and read magazines and took pictures.

Several months ago one of my blog followers from Biloxi, Mississippi sent me a bunch of Southern Lady magazines, so I took several with me to read.  To my delight, in one of the magazines was a recipe for Scripture Cake, taken from the cookbook, Sunday Dinner in the South. 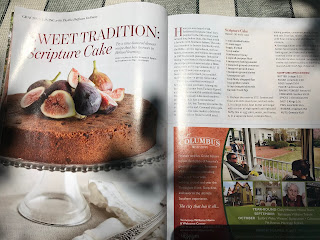 Tomorrow is Bible study at my house and even though one of the ladies is bringing a fruit salad, I thought scripture cake would be great to serve with it.  All the ingredients can be found in designated scriptures.  The cake recipe was created to strengthen Bible knowledge, for example:  "1/2 cup Genesis 43:11"


I was at the produce market early this morning to purchase figs.  I've only eaten a fig once in my life, but I liked it and I enjoy Fig Newton cookies, so hopefully I'll like the cake.  I've heard purple figs are sweeter than green ones, so I was happy the market had them.  The fruit contains a wealth of beneficial nutrients including vitamin A, vitamin B1, vitamin B2, calcium, iron, phosphorus, manganese, sodium, and potassium. 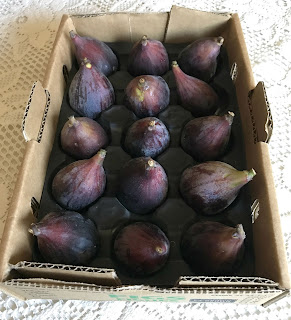 The recipe makes one large 10-inch cake.  I just took it out of the oven, and it's cooling. 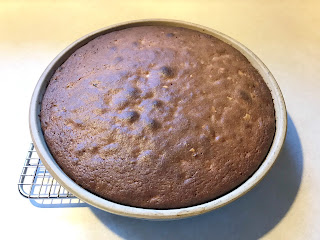 It doesn't call for any frosting, so I bought a jar of Fig Preserves and melted it down to make a glaze to pour over the top.  Will report back tomorrow on whether we like it.  Have you ever made or eaten a piece of scripture cake?

I'll serve it was a black tea called "Sparrow" blended locally by Mary Jones.  It contains star anise, cloves, ginger, vanilla bean, and calendula and sunflower petals, so it should go nicely with the cake. Mary sells her teas at Detroit Eastern Market and "Sparrow" is her number one seller.  I didn't initially pick the tea for its spiritual implication, but it occurred to me afterwards that sparrows are mentioned in the Bible several times.  Matthew 10:29-31 is a favorite.  Jesus is speaking to his 12 disciples and says:  "Are not two sparrows sold for a penny?  Yet not one of them will fall to the ground apart from the will of your Father.  And even the very hairs of your head are all numbered.  So don't be afraid; you are worth more than many sparrows."  What a great promise! 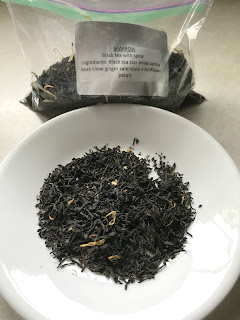 Back to last Saturday...  It was also granddaughter Tiffany's 27th birthday.  She spent the day celebrating in Holland, MI and enjoying Lake Michigan with her hubby, John, sweet little Evie, and her mom [my daughter, Lori]. 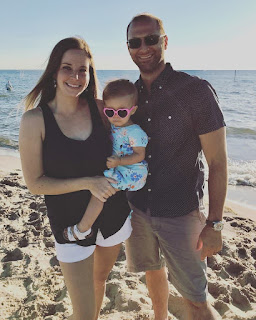 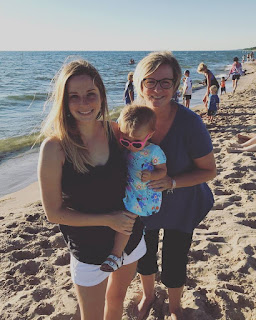 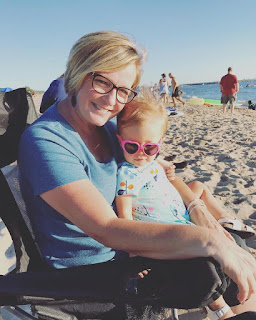 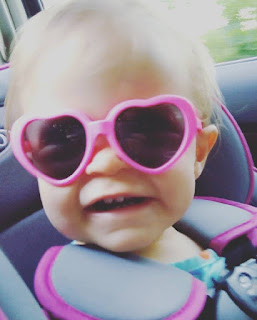 Posted by relevanttealeaf at 8:53 PM