For the last four or five years our granddaughter, Isabella, has come to spend a few days with us during her summer vacation from school.  This year she came last Thursday afternoon, and we'll take her back later this afternoon.

Our house is very quiet compared to her's that's bustling with activities from two siblings and friends, so I planned several activities [most that we hadn't done before] to keep her from getting bored or homesick.

It's become a tradition for her and Papa to go shopping for a new backpack and school supplies while she's here, so that was the first thing on the agenda Friday morning.  Izzy did her research and knew exactly which backpack she wanted and the store that sold it. 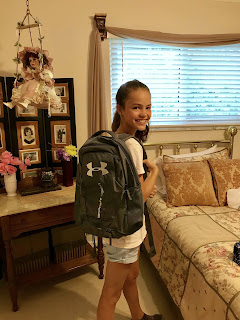 After the shopping expedition, we went on a 'field trip.'  The first stop was a middle school in Detroit where her Papa has been working this summer with the G.M. Student Corps.  Their first task was upgrading the school playground. Jerry and the students installed new benches, trash cans, and put new mulch down [pictured in the photos below]. 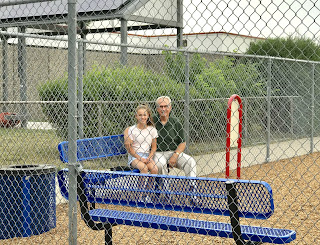 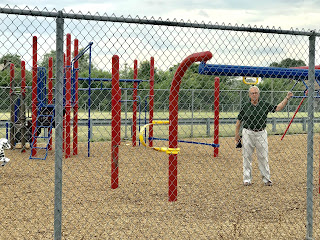 Then we were off to Wyandotte, a suburb south of Detroit along the Detroit River, where Jerry and I grew up and met.  We thought she might enjoy seeing our history.  The first place she saw was the bungalow house Jerry lived in when I met him in 10th grade.  We were pleased the homes we lived in over 50 years ago are still lovingly maintained. 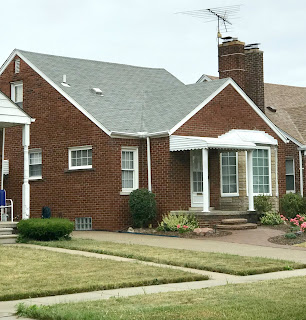 Jerry drove her by his grade school, middle school, and the high school where we met.  Then we went by the 1950's ranch house I lived in until I married and left home. 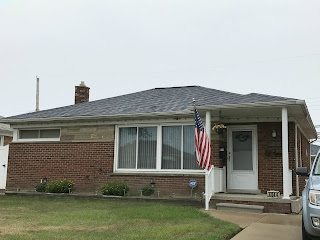 Behind my house was/is Bob-Jo's frozen custard stand.   I loved going there when I was a kid, so we took Izzy.  It's amazing that it's still there all these years later. 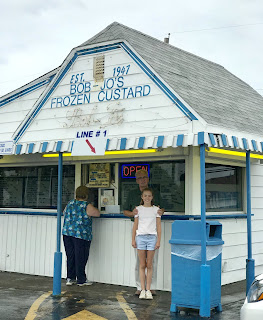 It was a drizzly afternoon, so we had to eat our frozen custard in the car, but it was still good and just as I remembered it!   I'm sure this was Izzy's favorite part of her history lesson.  ;-) 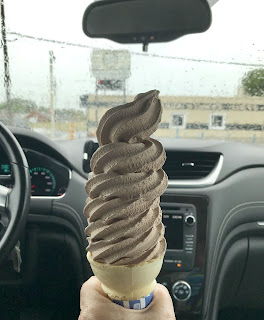 After showing her the hospital where her Daddy was born, we decided she had seen enough history and reminiscing for one day, so we headed back home.  We played card games together until Papa decided to call it a night, then Izzy and I watched a movie before bedtime.

Saturday was another full day.  Izzy bought some metal shelves for her bedroom that she wanted to paint white before assembly.  So they spread them out on Papa's work bench in the garage, and he gave her a tutorial on spray painting. 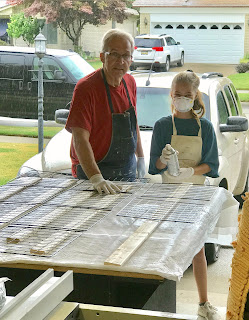 Afterwards we took her swimming at the Warren Pool where she loves the water slide. 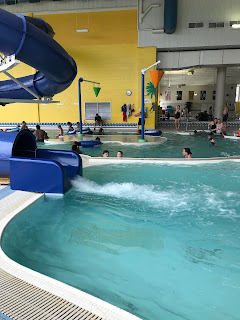 Waiting her turn in line to go down the slide. 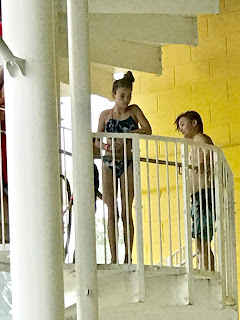 And there she is at the bottom! 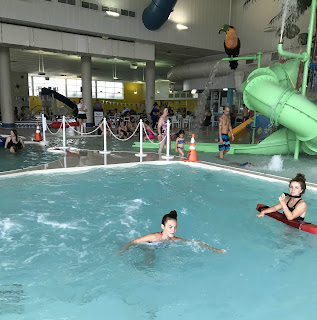 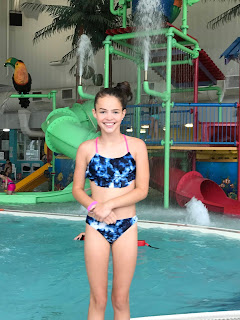 Then we were off to the movie theater to watch 'Ant Man and the Wasp' [her choice].  They don't make movies like they used to!  ;-) 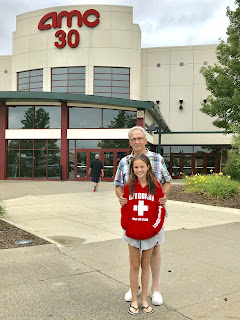 Sunday was church, and afterwards she picked Olive Garden for dinner.  I had recently read in the newspaper about train rides offered every Sunday by the MI Transit Museum.  The ride in a 1926 Pullman car is boarded at Joy Park in Clinton Township [$7 for adults and $4 for children].  I thought that sounded like a fun activity since Izzy watched the entire Anne of Green Gables series on Netflix, and there are some train scenes in the series [albeit 1907 setting instead of 1926].


The 1926 Pullman car pictured on our ticket. 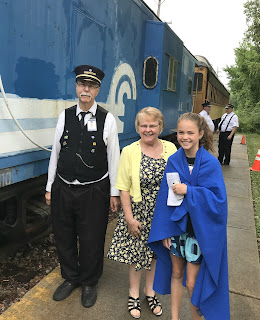 The one mile train track used for the ride was built in the late 1890's and ceased operation by the railroad in 1995.  The 10 m.p.h. ride was just under an hour. 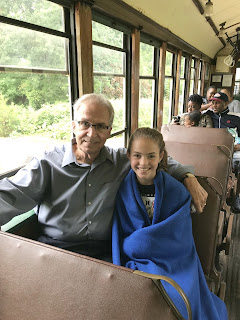 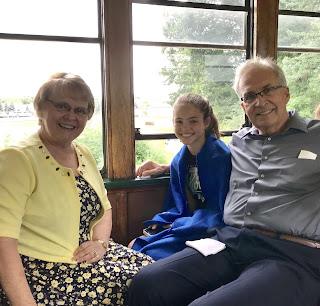 It's a popular activity, because by the time everyone boarded both Pullman cars were full. 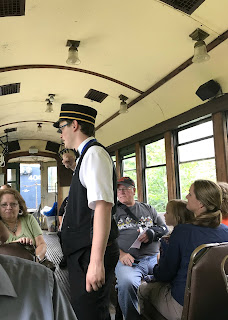 The conductor gave Izzy a sticker stating she rode the MI Transit train.  [Tomorrow she'll be riding an Amtrak train with her family to Chicago, so I'm sure that will be a lot more exciting.  ;-)] 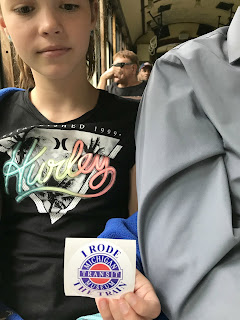 After our train ride we toured the Mt. Clemens [MI] Train Station that was built in 1859 and was in service until July 17, 1954.  The tracks that run beside it are still in use today by Canadian National Railways.  The city purchased the depot in 1980 and leases it to the MI Transit Museum.  The depot is listed in the National Registry of Historic Places.

Soon after its opening, the Grand Trunk Western railroad hired 12-year-old Thomas Edison to sell newspapers and candy on the Port Huron/Detroit run.  Edison saved the station agent's young son from being run over by a rolling box car.  In appreciation, the station agent taught Edison to operate the telegraph, spurring his interest in technology. 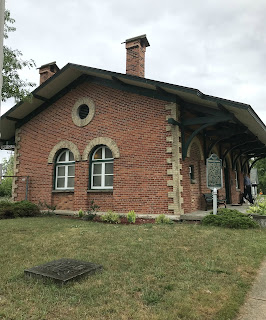 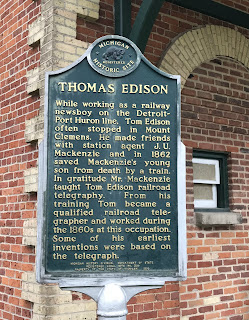 So glad they didn't tear the station down.  Jerry's waving in the doorway. 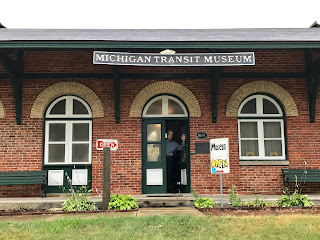 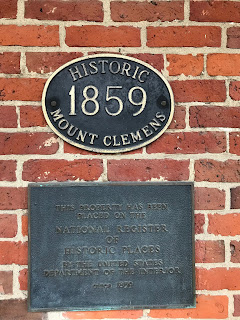 ~ Interior of the station ~ 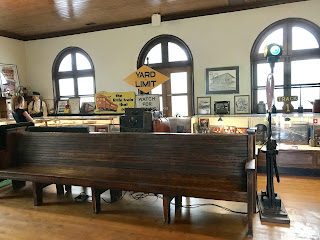 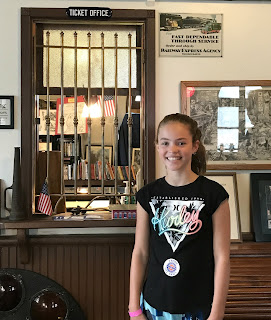 I found it interesting that the plaque displayed in the depot [below] was presented to the City of Mt. Clemens by the J.L. Hudson Company on the 100th anniversary of the birth of Thomas Edison in Feb. 1947. 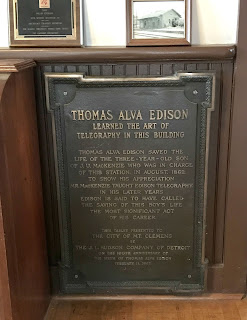 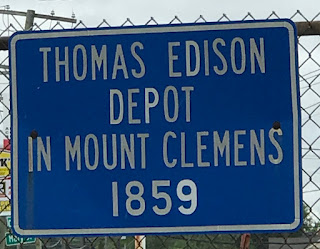 It was an enjoyable and interesting afternoon.  When we got home, Izzy wanted to bake a cake.  We were supposed to decorate it today to take to a swimming gathering at her maternal aunt's house near us, but the cool, drizzly weather canceled the outing.  I'll freeze it and we'll decorate it another time.

Tomorrow I'll rest ;-), but I'll miss her.  She turns 13 next month and enters the 8th grade.  She's growing up quickly and there won't be many summer's left where she'll want to come stay with us, so we enjoy what we have.

Posted by relevanttealeaf at 10:48 AM