Today was Bible study at my house.  We studied Deborah and Jael in the 4th and 5th Chapters of Judges.

Deborah was a prophetess of God [one who discerns His will and declares it to others]. She was also a wife and judge over the tribe of Ephraim.  Female leaders were rare during that period of Israelite history, but strong male leadership was lacking due to oppression by a foreign king.  Deborah stepped up to arouse them from their lethargy and despair. God used her as a key figure in restoring their confidence and determination to be victorious in battle and overcoming their enemies.

Sisera was the commander of the Canaanite army of King Jabin [who oppressed the Israelites]. While his army was perishing in battle, Sisera escaped on foot and came to the tent of Jael seeking a place to hide. Huge mistake on his part! While he was sleeping she courageously killed him, and changed the course of history for the Israelites. The mightiest general in the region [at that time] was defeated by an ordinary housewife!  Yay for God, Deborah, Jael, and womanhood!  We learned that with God's help we can live victoriously, and be vessels of deliverance for others.


V is for Victory!

For the first time since I've been hosting the Bible studies I didn't serve lunch.  Instead we had chocolate raspberry [black] tea and coconut scones at the conclusion of the lesson. 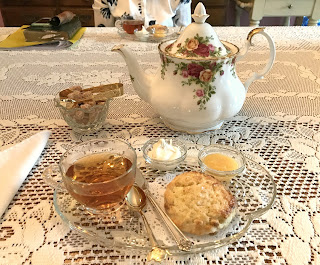 At 1:30 I had to leave with Landon to meet his mother so he could be home in time for sport tryouts later in the afternoon.  We enjoyed his visit, and next week Ellie comes for a few days.  I'll be taking her for her first tearoom visit.

Below are a couple of pictures of Landon at the Warren pool yesterday.  Like his sister, he enjoyed the big water slide. 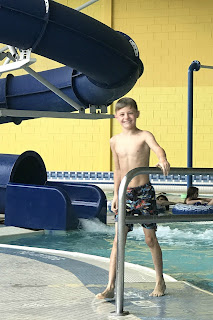 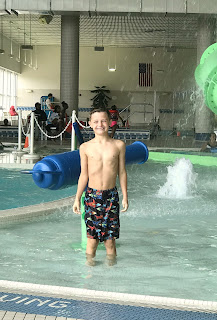 Hope he likes the emoji I used in my blog post today.  ;-)

Posted by relevanttealeaf at 8:23 PM