Fabergé Exhibit at the Detroit Institute of Arts

Yesterday I met my girlfriend and her family at the Detroit Institute of Arts [DIA] to see the  Fabergé exhibit. 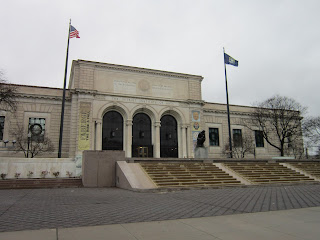 You may remember my post of December 10, 2012 about the DIA lecture, Dining with the Tsars by Darra Goldstein, which was followed by a Russian Imperial Tea Reception.  Due to the disappointing the tea reception,  the DIA sent two complimentary VIP tickets to the Fabergé exhibit, which we used yesterday. 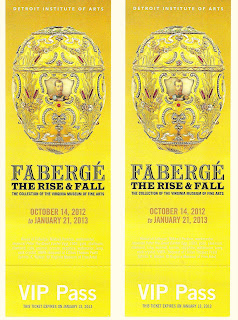 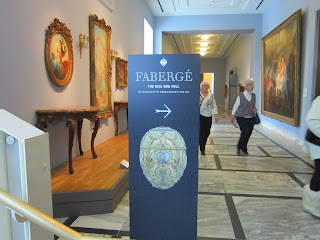 The exhibit was very educational and enjoyable, and I'm grateful for the complimentary tickets.  No photographs were allowed inside the exhibit, but I was  able to get a couple of photographs outside the exhibit hall.  The Detroit Free Press Newspaper published 47 photos of  the 200 exhibit pieces, which can be seen here, or view all of the pieces by going to the Virginia Museum of Fine Arts website.   The VMFA has the largest collection of Fabergé in the United States.


Entrance to the exhibit. 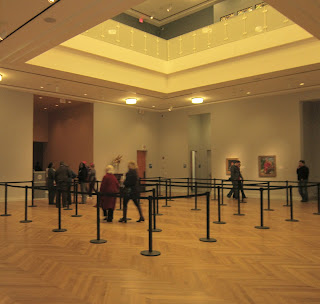 Lillian Thomas Pratt, wife of a General Motors executive,  bequeathed several hundred pieces of Russian art - 80% of which was decorative art mainly from the Fabergé workshops, to the Virginia Museum of Fine Arts in 1947.  Her collection evolved from 1933 to 1946.

The Fabergé Imperial Easter Egg Collection featured in the exhibit, is the largest public assemblage outside of Russia. Of the 50 Imperial Easter Eggs Fabergé created for the Romanov family, 42 are known to have survived, and five are on display at the DIA exhibit. No two eggs were created alike, and each is valued in the millions of dollars.

Below is a public domain photo of the Peter the Great Egg made by Fabergé for the last Russian Tsar, Nicholas II, who presented it to his wife, Empress Alexandra.  He paid the equivalent of $112,000 for it in 1903.  Nearly five inches tall, it is made with gold and platimum, and is trimmed with diamonds, rubies, sapphires, watercolor ivory, rock crystal and enamel.  To read more about the Peter the Great Egg, click here.  The egg commemorated the 200th anniversary of the founding of St. Petersburg. 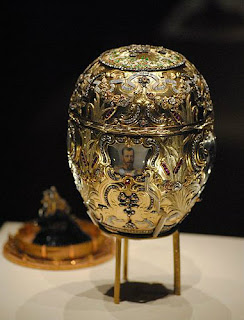 It has been said Fabergé's work was for Russia's wealthy 5%. The peasants were starving, and the country was on the brink of the most profound social revolution in modern history,  while the Tsar turned a blind eye and continued living in opulence, with no sensitivity to the people of his country.
In addition to Fabergé's Imperial Easter eggs, the exhibit consists of parasol and cane handles, candy boxes, ring cases, cigarette cases, picture frames, vases, tankards, coffee sets, loving cups,  pendants, brooches, and much more.  The craftsmanship is extraordinary, and absolutely amazing.

The exhibit ends with a sad and sobering silent film about the nationalization of the House of Fabergé, and the execution of the Tsar and his family at the hands of the Bolsheviks.

My girlfriend's daughter bought the rhinestone studded egg below in the exhibit gift shop.  It has a miniature egg pendant necklace inside.  Isn't it pretty? 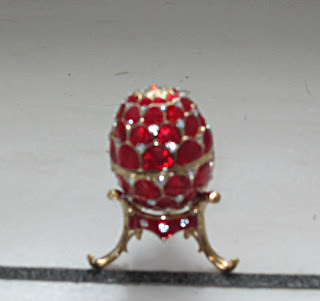 I purchased a box of Russian cookies and Greenfield tea in the gift shop.  They sold Russian Matryoshka dolls [nesting dolls], but I already had one that a friend brought back from Russia for me.  I could have been tempted by the Lomonsov porcelain, but the tea and cookies were more affordable!  ;-)  Greenfield tea is considered one of the most popular tea brands in Russia. 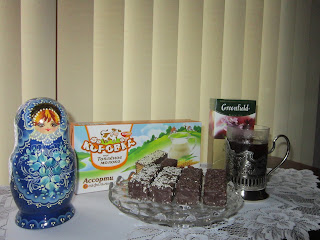 I made myself a cup of the tea and poured it into my Russian podstakanniki [tea glass], while I researched the life of Carl Fabergé.  The tea, which is an Indian black tea, is blended with black currant leaves, thyme, mint and peach flavoring, and is very good.  One side of the box is printed in Russian, and the other in English.
Peter Carl Fabergé

Peter Carl Fabergé was born in St. Petersburg, Russia, to a Baltic German jeweler, Gustav Fabergé, and his Danish wife, Charlotte.   Carl was mentored and tutored by his father's trusted workmaster, Hiskias Pendin.  Upon Mr. Pendin's death, Carl took over the family jewelry shop in St. Petersburg.   He was awarded the title Master Goldsmith, and in 1885, Tsar Alexander III  gave the House of Fabergé the  title: "Goldsmith by special appointment to the Imperial Crown."  Fabergé's work with the last two Tsars in the Romanov Dynasty earned him worldwide fame, and his company became the largest jewelry business in Russia.
After the Russian Revolution, the House of Fabergé was nationalized by the Bolsheviks, and the Fabergé family fled the country.  Carl Fabergé died in Switzerland in 1920 at the age of 74.  The Romanov palaces were ransacked and their treasures moved by order of Vladimir Lenin to the Kremlin Armoury.  To acquire more foreign currency, Joseph Stalin had many of the Imperial Easter Eggs and other Fabergé pieces sold.

And so goes the condensed account of the Rise and Fall of the House of Fabergé.
Posted by relevanttealeaf at 7:44 PM