The City of Plymouth, Michigan, about 38 miles west of where I live, hosts an Ice Festival every January.  This was its thirty-first year, held January 18-20th. 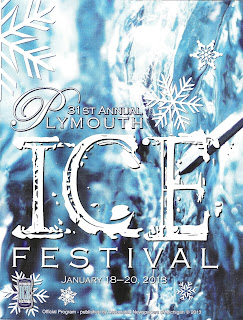 I didn't attend the actual festival, but I read about it in the Detroit Free Press newspaper, which stated the sculptures would remain in Kellogg Park [city square] as long as weather permitted.   There were over 100 sculptures.  Below is the Statue of Liberty sculpture. 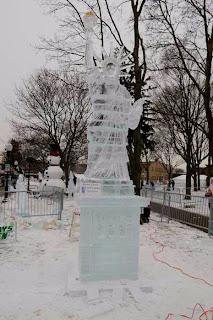 Since our temperatures have been frigid the past three days I asked my hubby if he'd like to  drive over to Plymouth to see the sculptures, and he agreed.  What I didn't consider was that last Saturday's temps rose to the mid-40's, which, of course, is ice melting weather.  And what didn't melt on Saturday, blew over with Sunday's high winds.  What remained by the time we arrived looked liked like a field of vandalized sculptures - and the vandal was Mother Nature!

All was not lost though, as the Sweet Afton Tea Room is also located downtown Plymouth.  The tea room was my second post when I first started blogging in January 2012.  Even though we were dressed for warmth - not dining - we headed over to the tea room.  It was only 11:00 a.m., so we were their first guests of the day [which was perfect for photographs]. Others arrived shortly thereafter.  While it's not distinct in the photo [unless you click on it to enlarge], the chandeliers are made with teacups. 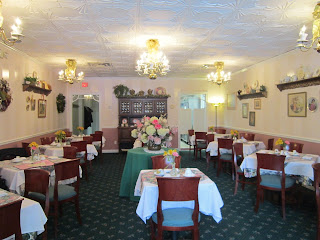 Our server's name was MaryAnn, and she was delightful.   I ordered the Cream Tea and my tea of choice was Wild Cherry Amaretto. 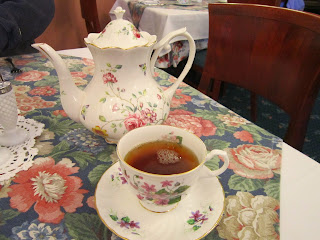 The two scones that came with the offering [along with Lemon Curd and whipped Devonshire Cream] were Honey Pecan and Apple Cinnamon.  My favorite was the Honey Pecan. 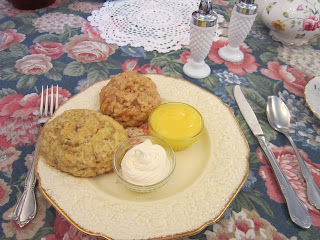 Jerry ordered their Chicken Pot Pie with a Cheddar Muffin and Cinnamon Orange Spice tea. Their teas are by Ashbys of London. 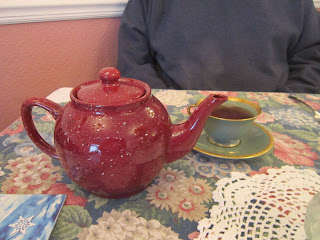 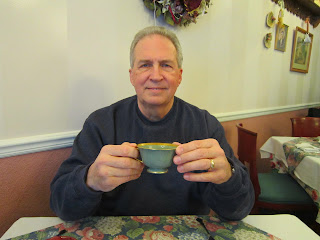 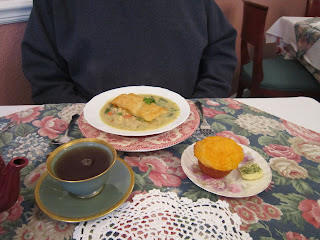 Even though we missed seeing the ice sculptures, we enjoyed the tea room together. 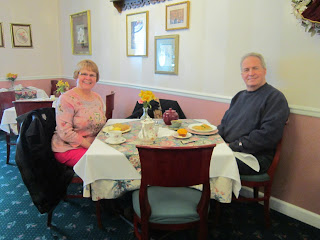 The owners have opened another tea room in Adrian, Michigan, called Governor Croswell Tea Room [named after a former Michigan Governor].  Adrian is 69 miles from my house, but the tea room is on my list to visit in 2013 - and there's an antique mall not too far away!

On our drive back home I thought how fun it would be if a group of tea rooms in southeastern Michigan sponsored a giant teapot sculpture some year.  Wouldn't that be fun to see?