On a trip to Colonial Williamsburg, Pleasant was completely taken with the costumes, homes, and accessories of everyday life.  As a former elementary school teacher and writer, she found herself wishing she could bring that history alive for children.

Christmas was approaching, and she had two nieces [ages 8 and 10] to shop for, but the popular dolls on the market for girls that age were Cabbage Patch Kids [which she thought were ugly] and Barbies [which seemed to make little girls grow up too fast].

Pleasant's two experiences [vacationing in Williamsburg, and shopping for her nieces] came together to create the concept for a series of books with 9-year-old-girls growing up in different times in history, with coordinating dolls and accessories.

A dust-covered, German-made doll, found in a Marshall Field's storeroom, served as a model, and the company in West Germany became the manufacturer of American Girl dolls.

The last important piece of Pleasant's original business plan was the building of American Girl Place in Chicago, where a store, theater, museum, and restaurant would all be located in the same building. That goal was realized in November 1998 when American Girl Place opened for business just in time for Christmas. Also occurring in 1998 was the sale of Pleasant's company to Mattell.

In March 2005 my hubby funded a trip for me, our daughter, daughter-in-law, and three oldest granddaughters [who were 8, 9, and 13 then] to visit Chicago's American Girl Place.

This past weekend, my hubby made two of our youngest granddaughters [ages 7 and 10] very happy when he said he'd fund another trip to Chicago's American Girl Place for them, our two daughters-in-law [their moms] and me.  It looks like our trip will be in March again.  Ellie [who is just six months old] will have to go to Chicago with adults when she's old enough,  since she'll be the only granddaughter remaining to enjoy the American Girl experience.

Twenty-seven years after the first American Girl doll was manufactured, they are still capturing the hearts of "tween" girls everywhere, and the stores have expanded from the first Chicago location to 12 other U.S. cities.


The photo below was taken before American Girl Place moved to the Michigan Avenue location. 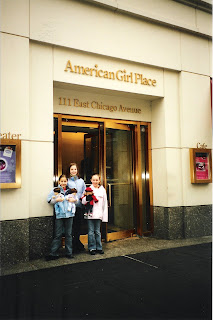 [L-R: Marissa, Tiffany and Brianna with their A.G. Dolls]

Nana with her three granddaughters. 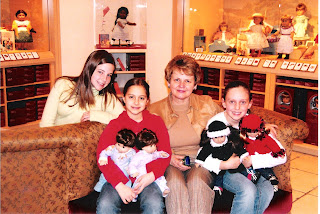 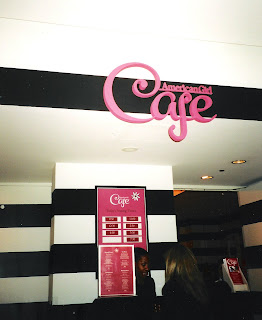 The Cafe was stunningly decorated in black, white and hot pink. 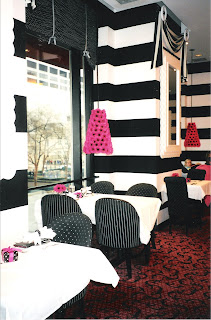 And was very busy the day we were there. 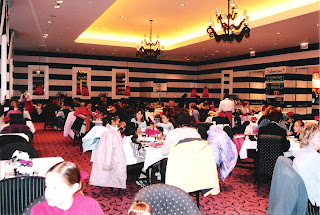 Our table was #1
[Notice the chairs for the A.G. Dolls to sit at the table] 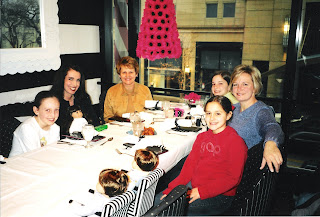 The savories included four tea sandwiches each:  [1] a heart-shaped, open-faced sandwich on white bread spread with tomato mayonnaise [dried tomato, and parsley].  A smaller heart-shaped piece of American cheese was laid on top of the bread, garnished with a cherry tomato slice.  [2] A two-tone egg salad triangle made with brown and white bread. [3] A sliced turkey finger sandwich made with wheat bread, spread with a cranberry/mayo mixture. [4] A  cucumber triangle on white bread, spread with cream cheese and dill.  The top plate included a warm banana scone with apricot marmalade and Devon cream, and a wedge of pumpkin tea bread. 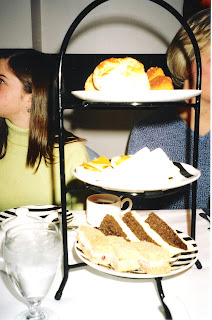 Our tea was an orange flavored black tea by Pickwick. 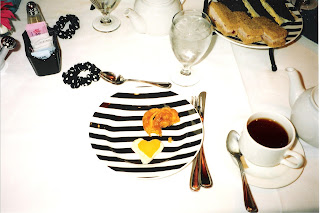 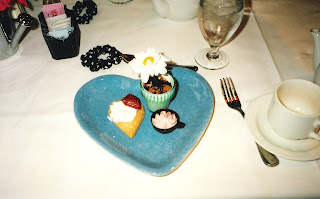 Even though Tiffany had an American Girl Doll, as a teenager her interest in dolls had waned, but she still had fun on the trip posing in front of Tiffany & Company on Michigan Avenue's "Magnificent Mile." 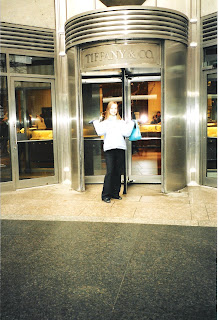 Please come back tomorrow when the post will be titled "A Warm Welcome."  I'll give you a hint: It pertains to Pleasant Rowland's childhood.