Yesterday, my girlfriend and I toured another property of an automobile manufacturing pioneer, John Francis Dodge [co-founder of the Dodge Brothers Company], and his wife, Matilda.

This was the 41st annual Holiday Walk [tour], and this year's theme was, "Puttin' on the Glitz."  A Christmas Tea was held after the tour which my girlfriend and I attended. 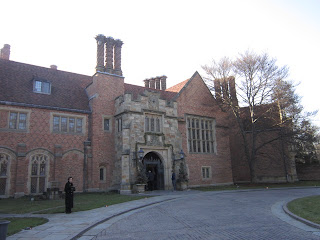 Matilda Rausch was born in Ontario, Canada in 1883, and moved with her family to Detroit, Michigan when she was a year old.  After graduating from business college, Matilda went to work as a secretary for Dodge Brothers Motor Car Company.  In 1907 she married her boss, John Francis Dodge [19 years her senior].  John and Matilda had three children:  Frances, Daniel and Anna Margaret.

The family often went on weekend retreats to a country property that the Dodges acquired, called Meadow Brook Farm.   They were building a mansion in affluent Grosse Pointe, Michigan when John died of influenza in 1920 at the age of 56.  The mansion stood unfinished for more than 20 years.

Matilda married lumber baron Alfred G. Wilson in 1925.  Rather than complete the Grosse Pointe mansion, Matilda decided to expand the Meadow Brook property and build Meadow Brook Hall.  Although much of the "Hall," is modeled after English manor houses of the sixteenth and seventeenth centuries, it was made of American materials and crafted by Americans.   Construction of the 100-room mansion, located on a 120-acre plot, began in 1926 and the family move in the fall of 1929.

Pictured below are the iron gates to the forecourt entrance of Meadow Brook Hall. 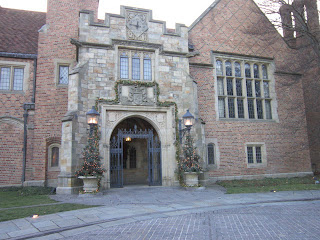 Below [L-R] me and Sandy in front of the beautifully decorated Great Hall fireplace.  No photographs were allowed beyond this point, except in the Dining Room where the tea was held. 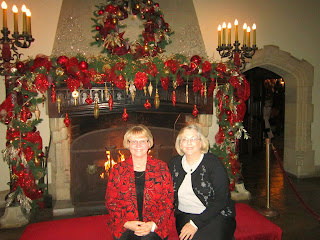 The Living Room was to the left of the fireplace.  Unlike Eleanor Ford [who I'm told was not a tea drinker], Matilda Dodge Wilson enjoyed the pleasures of tea, and it was very much a part of her lifestyle.   She hosted teas in the Living Room where a 1907 Steinway piano, and a 1919 Aeolian organ [housed in an alcove] are found.  It is a unique player organ and has hundreds of rolls  stored in the alcove with it.  An authentic Tiffany light fixture hangs above it.  The organ was being played as we toured the mansion.

On the left side of the Great Hall is a long gallery [hallway] that extends to the Dining Room. The Morning Room is off the gallery.  I was unable to take any photos inside the room, but I got permission to take a picture of this sign that was posted in the Morning Room.  [Click on photo to enlarge for easier reading.] 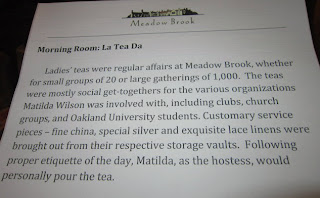 As a side note, Governor Luren Dickinson appointed Matilda Wilson as 43rd Lieutenant Governor of the State of Michigan in 1940.  It was essentially an honorary position to fill a term that had not yet expired, but Matilda was the first woman ever to hold that position.  She was quoted in the Detroit News as saying, "...I feel that it is a symbol of Gov. Dickinson's belief in the place of women in public life..." 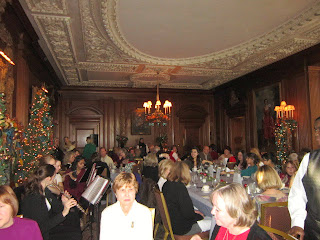 The 10th Annual Christmas Tea was a sell-out event.  [The dining room accommodates 100 guests.]  When we entered the dining room, festive flute music was being played by four flutists from two area high schools, and they played throughout the entire tea. 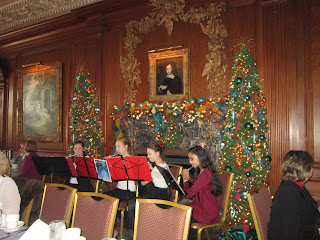 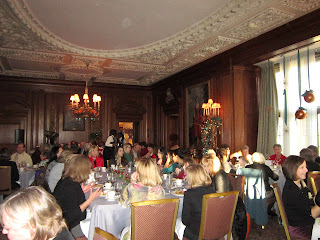 While the Christmas Tea at the Edsel and Eleanor Ford House yesterday was lovely, it paled in comparison to the Meadow Brook tea.   What could be nicer than having tea in the mansion's actual dining room?   Below was my place setting. 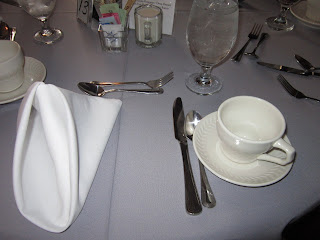 No tea bags here.   The tea was freshly brewed and the staff continuously kept our cups filled.  The three tea choices were Earl Grey, and herbals Mint and Cranberry.  I drank Earl Grey, which had a delicious balance of oil of bergamot.
Menu items for the tea were inspired from the Wilson's teas achieves.  Everything was superb! 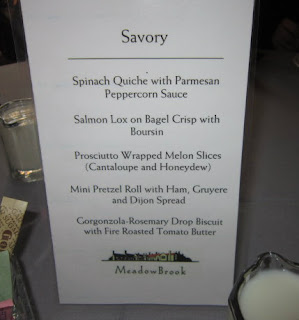 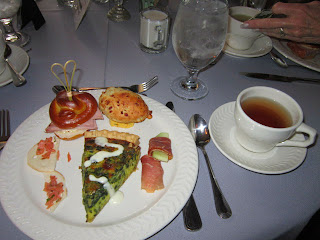 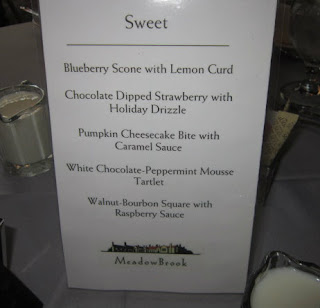 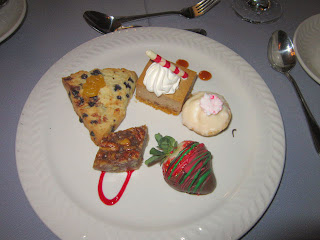 Following the tea we walked a short distance to Knole Cottage, which was built for Frances Dodge on her 12th birthday - before construction on Meadow Brook Hall had even begun.  The cottage was to teach her how to take care of herself, and to learn housekeeping skills [as if she would ever have to do housekeeping in real life! ;-)]  She was actually given a check book for expenses that she had to balance every month. 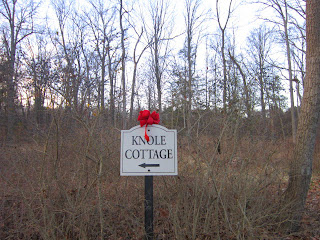 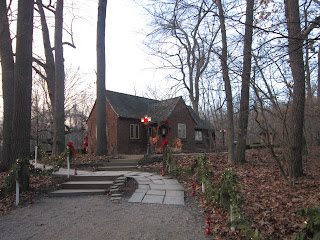 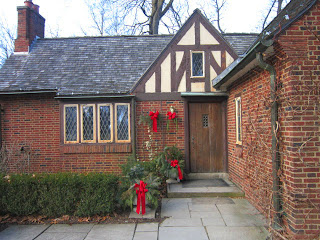 The photo below is the front facade of Meadow Brook Hall.  The 88,000 square foot mansion ranks sixth on the list of largest historic homes in the United States, and is one of the finest examples of Tudor-revival architecture in America. 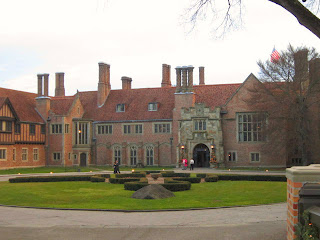 In 1979, on the 50th Anniversary of Meadow Brook Hall, it was officially listed as a Michigan Historic Site.  In 2012 the estate became Michigan's newest National Historic Landmark. 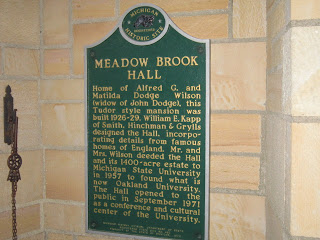 In 1957 Alfred and Matilda Wilson left their residence and its collection along with the estate's 1,500 acres and $2 million to Michigan State University to found Oakland University.

What a great place to go for Christmas tea!

Posted by relevanttealeaf at 12:25 AM