Cute as a Button

Christmas is children, and the theme for one of the December dinners I coordinated for the ladies' of my church was "Cute as a Button."


Church fellowship hall tables all set-up for the event. 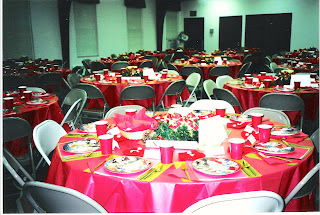 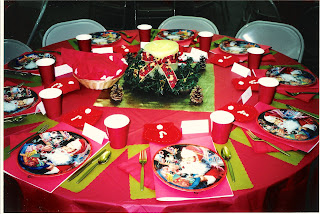 Christmas is also the celebration of the birth of Jesus Christ, and because Scripture tells us of His love for children, we recognized fourteen "little ones" from our church in a fashion show.  They were either dressed in red outfits or Santa suits as their parents paraded them for all to see.   I had the privilege of introducing each one in my Mrs. Claus outfit. 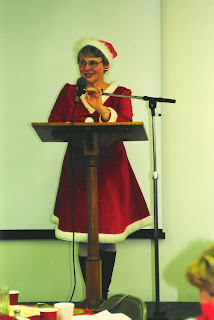 The Children's Pastor and his son. 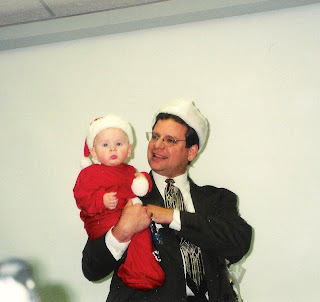 Cute as a Button Parade.  Each child was given a Christmas stocking as a keepsake. 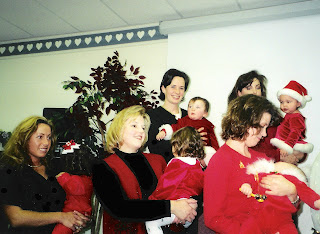 We also had a children's choir of fifteen who vocally entertained us.   Can you hear them singing, "Away in a Manger" and "We Wish You a Merry Christmas?"   They each got a large candy cane filled with candy for their performance. 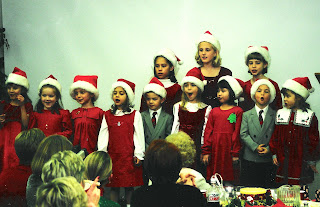 "Nana" with my three granddarlings! 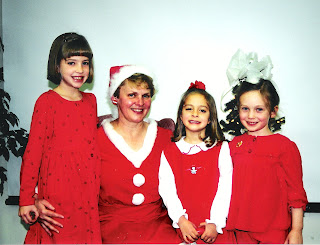 No Bake Fudge Cookies for Santa
2 cups sugar
1/2 cup milk
1/3 cup unsweetened cocoa
1/2 stick butter, softened
1/4 cup creamy peanut butter
3 cups quick-cooking oats
Combine sugar, milk, cocoa and butter in medium saucepan.  Place over medium-high heat and bring to boil, stirring constantly.  Let boil 1 minute.  Remove from heat.  Stir in peanut butter.  Add oats and blend thoroughly.  Drop by teaspoons onto waxed paper.  Work quickly before mixtures hardens and loses its glossy sheen.  Let cool completely.  Store in air-tight container.  Yield:  about 4 dozen
Cute as a Button Holiday Project
Purchase a red Santa stocking trimmed with white fur for every child [or grandchild] in your family.  Each year purchase a single button chosen for its significance to the child [i.e. ice skates for an ice skater].  Allow the child to sew his/her button on their Santa stocking, giving assistance if needed.   Make this a yearly tradition, and by adulthood the stocking will be filled with buttons of meaning and significance.
"Yes, Virginia, there is a Santa Claus"
Editor Francis P. Church's letter to Virginia O'Hanlon is one of the most touching written demonstrations of the importance in believing in what cannot be seen, touched, or proven.  The letter originally appeared in the September 21, 1897 edition of New York's Sun.  The quick response of a veteran newsman has become history's most reprinted newspaper article.  Over a century later, it remains a classic.
*  *  *
WE TAKE PLEASURE in answering at once and thus prominently the communication below, expressing at the same time our great gratification that its faithful author is numbered among the friends of the Sun:
"DEAR EDITOR - I am 8 years old.
Some of my little friends say there is no SANTA CLAUS.  Papa says, 'If you see it in the Sun it's so.'  Please tell me the truth, is there a SANTA CLAUS?
VIRGINIA O'HANLON
115 West Ninety-fifth Street
Virginia, your little friends are wrong.  They have been affected by the skepticism of a skeptical age.  They do not believe except they see.  They think that nothing can be which is not comprehensible by their little minds.  All minds, Virginia, whether they be men's or children's are little.  In this great universe of ours man is a mere insect, an ant, in his intellect, as compared with the boundless world about him, as measured by the intelligence capable of grasping the whole of truth and knowledge.
Yes, Virginia, thee is a Santa Claus.  He exists as certainly as love and generosity and devotion exists, and you know that they abound and give to your life its highest beauty and joy.  Alas!  How dreary would be the world if there were no Santa Claus.  It would be as dreary as if there were no Virginias.  There would be no childlike faith then, no poetry, no romance to make tolerable this existence.  We should have no enjoyment, except in sense and sight.  The eternal light with which childhood fills the world would be extinguished.
Not believe in Santa Claus!  You might as well not believe in fairies!  You might get your papa to hire men to watch in all the chimneys on Christmas Eve to catch Santa Claus, but even if they did not see Santa Claus coming down, what would that prove?  Nobody sees Santa Claus, but that is no sign that there is no Santa Claus.  The most real things in the world are those that neither children nor men can see.  Did you ever see fairies dancing on the lawn?  Of course not, but that's no proof that they are not there.
Nobody can conceive or imagine all the wonders there are unseen and unseeable in the world.
You tear apart the baby's rattle and see what makes the noise inside, but there is a veil covering the unseen world which not the strongest man, nor even the united strength of all the strongest men that ever lived, could tear apart.  Only faith, fancy, poetry, love, romance, can push aside that curtain and view and picture the supernal beauty and glory beyond.  Is it all real?  Ah, Virginia, in all this world there is nothing else real and abiding.
No Santa Claus!  Thank God!  He lives, and he lives forever.  A thousand years from now, Virginia, nay, ten times ten thousand years from now, he will continue to make glad the heart of childhood.
﻿
﻿
Posted by relevanttealeaf at 7:00 AM

Email ThisBlogThis!Share to TwitterShare to FacebookShare to Pinterest
Labels: Cute as a Button; Christmas