Dining with the Tsars - Detroit Institute of Arts

On Saturday, December 8th, my girlfriend and I visited the Detroit Institute of Arts to hear a lecture by Darra Goldstein, a professor at Williams College, leading authority on Russian cooking and culinary arts, and author of four cookbooks - including "A Taste of Russia."  The lecture covered 200 years of Russian haute cuisine from its start in the 1700's to its demise following the Russian Revolution in the early 1900's.   The lecture was in coordination with the Fabergé Exhibit which is currently at the museum. 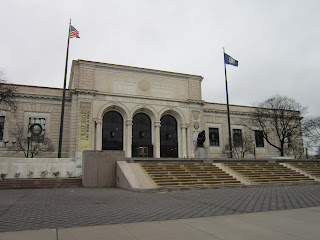 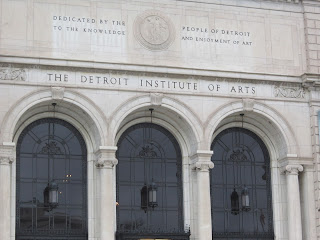 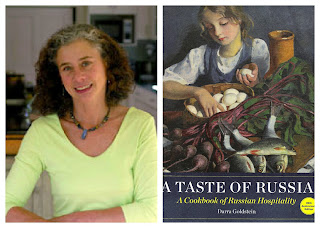 [Darra Goldstein and her cookbook]
Darra's 45 minute [or so] lecture and PowerPoint presentation were excellent.  I purchased her cookbook which provided details to some of the information given in her lecture, and illustrates Russia's culture and hospitality through its food.
Darra has a Ph.D. in Slavic Languages & Literature which partly accounts for her love of Russian cuisine, but the greatest influence came from her grandmother who was a Byelorussia immigrant.
It's impossible to share everything in Darra's lecture but three highlights stand out:
[1] Hospitality is a long-standing tradition in Russian culture from the prerevolutionary  times of nobility and peasantry, to the present time.  The center of any home is the table where the most significant conversations take place.   The Russian word for hospitality is formed from two words - bread and salt.  Bread is the staff of life, and salt, from which the word salary is derived, was once so expensive that it was more precious than gold.  Together the words mean regaling with bread and salt.   A dish of salt used to be offered along with bread - and sometimes the salt dish was placed in a special indentation in the center of the loaf, for easy dipping.
[2]  Russia's wealthy, upper class population began the tradition of dining  à la russe style, which is food courses brought to the table separately.  The second course did not appear until the first had been cleared away and so on throughout the meal.  This ensured steaming hot soups, juicy roasts and foods that were meant to be chilled, stayed chilled.  Only desserts and flowers were allowed to remain on the table throughout the meal.  It was a contrast to the French dining style where the abundantly laden table was a feast for the eyes, but the beautifully arrayed food sat out for long periods of time and was disappointing to the palate.   We can thank Russia for our modern-day table service, which though modified, is a direct descendant of à la russe dining. 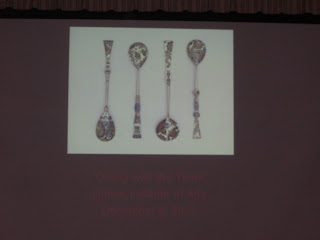 [3]  The elegant and exquisite Imperial Russian treasures made by the House of Fabergé.  I had never seen Ice Cream Coolers made in French soft past porcelain with enamel decoration and gilding.  You can see them at the Detroit Institute of Arts website www.dia.org  by typing in Ice Cream Coolers in the search box.  The Russians loved Oriental ornamentation.  Fabergé used lots of vivid, bright colors in his enamel and china to compensate for the dark, sunless days caused by Russia's geographic location.
Following the lecture, we purchased a ticket to attend a Russian Imperial Tea Reception.  It was advertised  "Be a part of something special -  join us for a reception featuring loose-leaf black tea, and a selection of sweet and savory treats that traditionally graced the Russian tea table."   Unfortunately the sell-out event for 150 guests was a disappointment.   It wasn't well planned, and consequently very unorganized.   The tea and food were in short supply - many of us never saw a savory and were served cheesecake and chocolate chip cookies hastily brought in from the nearby cafeteria.  Attendees were crammed into a small room [which was not a dining room - although we did pass an empty, elegant dining room on our way to this room] with only a few tall tables for some guests to place their food and tea on.   Many guests left complaining and disappointed, and chalked it up to a donation to the Detroit Institute of Arts. 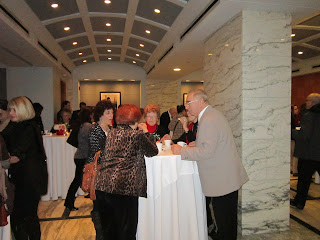 Detroit Examiner Tea Editor, Barb Gulley, and daughter, Rachel.  I've had the privilege of attending a few tea events with Barb this year. 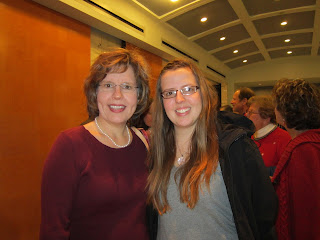 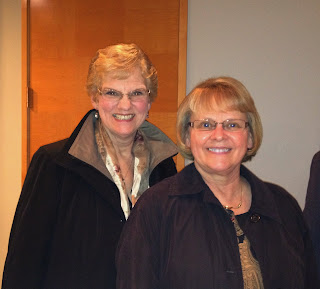 Below are the small urns that were used to facilitate 150 guests.  I saw only two tea stations with a total of three urns.  May I consult with them on their next tea, please? ;-)   Their idea of hosting a Russian tea was great, but the execution was very lacking. 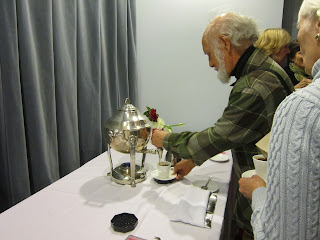 This was a dessert crescent at the self-serve, buffet table. 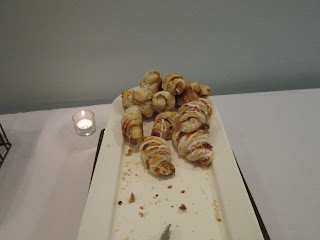 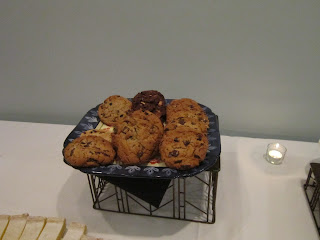 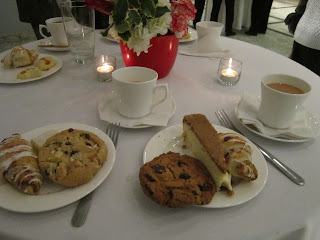 I took this photo of the tea station after most of the guests had left. 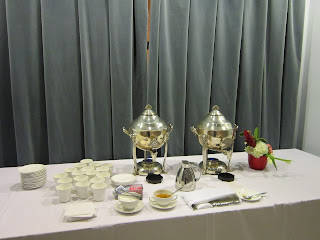 The last chapter of Darra's cookbook is titled Sitting Around the Samovar and is devoted to tea.   To quote her:  "Picture a brass urn with wooden handles, its high patina reflecting the warmth of a cozy room.  The face of this urn, emblazoned with medals and etched with the likeness of the tsar, tapers down to an ornate spigot.  This is the samovar, the symbol of Russian hospitality at its best,"  although it's not strictly a Russian discovery.   The idea was first introduced by the invading Mongol hordes in the thirteenth century, hence its resemblance to the Mongolian hot pot.  Tea loving Russians, however, found it too efficient to be ignored and it's become an essential part of Russian life.
In Russian, samovar means "self-cooker."  Tea itself is not made in the samovar.  The samovar serves only to heat water and keep it hot,  ready to refresh guests with a cup of hot tea. 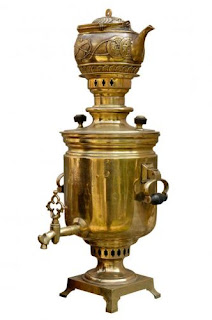 [Internet Photo]
Within the central body is a wide tube.  The tube was filled with hot coals or charcoal to heat the water poured into the body of the urn surrounding the tube.   The tea,  made into a strong concentrate and brewed separately in a tiny teapot, was kept warm on top of the samovar.   To make tea, a small amount of the concentrate is poured into each cup, and the cup is filled with hot water from the samovar, adjusting the strength of the tea according to taste.  Because coal heated samovars produce smoke, most Russian homes today use small electric samovars, with the coal heated ones used only for ornaments or decoration.
The hostess traditionally presides over the samovar, pouring the tea into porcelain cups for the ladies, and glasses for the men.  The glasses are inserted into podstakanniki, metal holders, so that the tea can be comfortably held.  [Do you remember Sean Connery using these in the movie, The Hunt for Red October?  ;-)] 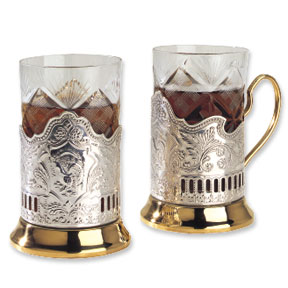 [Internet Photo]
Children were  [and still are] encouraged to drink tea from  saucers to prevent burning their lips.
Russians love sugar in their tea.  They say it brings out the flavor of the leaves.   Drinking tea with a cube of sugar clenched between the teeth was a favorite among peasants, and even today many Russians swear by a cube of sugar between the teeth for the greatest satisfaction.  Another Russian way of drinking tea is with jam.  The jam is served alongside the tea in tiny, flat crystal jam dishes.  It can either be eaten right from the dish or spooned into the tea itself.   Often a lemon or apple slice is placed in  their tea.
Russians drink mainly black tea although green tea is gaining in popularity.  Most of the tea in Russia is sold loose, or in packets, and occasionally one encounters tea bricks, which was the standard brew of Siberian exiles.
Tea drinking is a favorite pastime in contemporary Russia, and most cities have tearooms.
Darra says along with the tea will be an assortment of pies, cakes, sweet breads and chocolates.  There are rarely fewer than three desserts to choose from and usually one must taste a little of each.
Aside from tea, I haven't partaken of  other foods and beverages Russians are well known for, namely Caviar and Vodka - and I probably won't  either!  ;-)

A big thanks to Darra Goldstein for a very enlightening afternoon!

Posted by relevanttealeaf at 10:47 AM