As I've mentioned in previous posts, I used to coordinate monthly theme dinners for the ladies of my church.  Today, I'm sharing one of the December dinners with the theme,  A Candy Cane Christmas.


Below is the publicity poster reflecting the theme.  [Humble apologies that the photos are before I had a digital camera, so I had to scan them and they're not the best.] 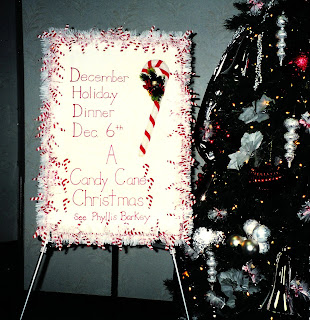 I made two styles of centerpieces that year, but the candy cane tower was the favorite one [and the most work!].  It required half gallon, quart, and pint containers [which I purchased from Baskin Robbins Ice Cream].  The bottom half gallon container called for 45 red & white stripped candy canes [left in their cellophane wrappers] glued all around the outside of the container.  The middle quart container required 31 cinnamon sticks, and the top pint container called for 23 peppermint candy sticks.  At the very top of the tower I placed a candy cane candle.  Peppermint twists and candy cane taffies were used  to conceal any exposed areas of the containers between each level. 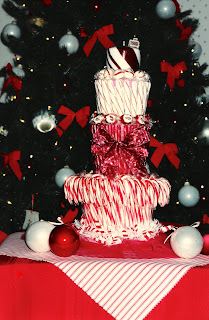 Have you ever began a project that was more work than you anticipated, and asked yourself, "What was I thinking???"  That's how I felt with this project, but once I purchased the supplies and started the assembly there was no turning back.   I made seven towers and seven floral containers, and finished them at 2:00 a.m. the morning of the event!
Pictured below is the second centerpiece - which was a coffee can with candy canes glued around the sides and filled with a silk poinsettia plant - much easier than the towers. 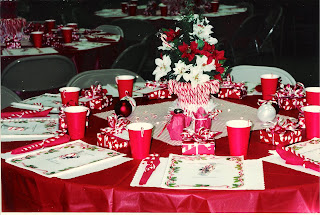 I purchased red stripped pillow ticking fabric from Calico Corners for the center of the tables to visually help carry out the candy cane theme. 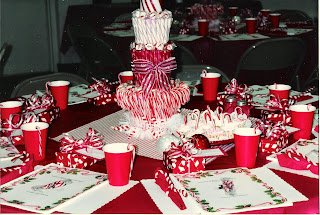 We served
Peppermint Ice Cream Punch
1 [8 oz.] jar red maraschino cherries, drained
12 round peppermint candies
2 half-gallons vanilla ice cream, softened and divided
1 cup coarsely crushed peppermint candies, divided [about 30 candies]
1 [2 liter] bottle Cherry lemon-lime soft drink, chilled
Place cherries and whole peppermint candies in bottom of a 6-cup ring mold.  In a large bowl combine 1 half-gallon ice cream and 1/2 cup crushed candies.  Spoon ice cream mixture over cherries and candies in mold.  Cover and freeze until firm.
In a large bowl, combine remaining half-gallon ice cream and 1/2 cup crushed candies; cover and store in freezer.
To serve, spoon peppermint ice cream mixture into a punch bowl.  Stirring constantly, pour soft drink over ice cream until blended.
Dip mold into warm water to loosen ice cream ring and place in punch bowl.
Yield:  16 cups punch
If you look closely at the above photo [click on photo to enlarge], you'll see the dessert served that night.  Unfortunately I didn't get a close-up photo.
Snowball Cupcakes
1 yellow cake mix
3 eggs
1/3 cup vegetable oil
1 [8 1/2 oz.] can Cream of Coconut
1 cup sour cream
Preheat oven to 350 degrees.  Combine cake mix, eggs, and oil in a large bowl and beat until well blended.  Add cream of coconut and sour cream and beat until smooth.  Line muffin pan with candy cane print cupcake liners and fill half full.  Bake 16-18 minutes or until done.  Cool.
We frosted them with Rich's Bettercreme vanilla, non-dairy frosting [available at cake decorating stores], then dipped the tops in flaked coconut and stuck a miniature candy cane in the center.
﻿
As you might guess, the program was The History of the Candy Cane.
It has been said the traditional candy cane was born over 350 years ago when mothers used white sugar sticks as pacifiers for their babies.  Really??  I think pediatricians and nutritionists might frown on the practice today.  ;-)
Around 1670, the choirmaster of Cologne Cathedral in Cologne, Germany, bent the sticks into canes to represent a shepherd's staff.  He then used the white candy canes to keep the attention of small children during the long nativity service.
In the mid 1800's the candy cane arrived in the United States when a German-Swedish immigrant in Wooster, Ohio decorated his spruce tree with paper ornaments and white sugar canes.
The red stripe was added to the candy cane at the turn of the century when peppermint and wintergreen were added, and became the traditional flavors for the candy cane.
For our devotional that evening I used the book: 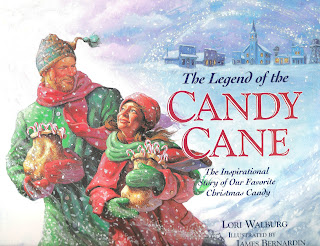 Long ago, a candy maker wanted to make a piece of candy that would remind his customers to celebrate Jesus at Christmas.
He began with white candy to represent the Virgin Birth, and the sinless purity of Jesus.
He decided the candy should be hard candy because Jesus is like a Solid Rock - He's always there when we need Him, and we can stand on the promises in His Word.
He shaped it like a "J" to represent the name of Jesus, whose birth we celebrate on Christmas Day.
When turned upside down it becomes a shepherd's staff, reminding us that the shepherds were the first to find out about Jesus' birth.  Shepherds use the staff to comfort their sheep, guide them on the right path, and keep them from danger and trouble.  Jesus is our "Good Shepherd."
The wide red stripe reminds us that Jesus shed His blood for our sins and paid a great price for our salvation through His blood and death.  The color red is also symbolic of hearts and love.  How Jesus loves us!  So much, that He gave His life for us.
The narrow red stripes remind us that "By His stripes we are healed."
He added peppermint flavoring to symbolize the spices which were gifts from the wise men and the flavor of peppermint is similar to Hyssop which was used in Biblical times for purification.
It's taste is sweet, and the candy cane reminds us to celebrate the sweetest gift of Christmas - Jesus!
When my four oldest grandchildren were young, I used to read The Legend of the Candy Cane to them on Christmas Eve.  This post has reminded me that I need to revive the tradition with my four youngest grandchildren.  Below is a photo of the grandchildren huddled around me on Christmas Eve 1998 as I read the story to them. 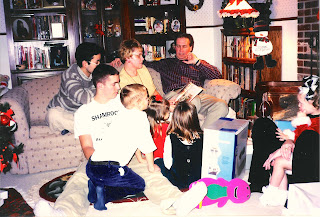 My youngest son, who was a student at Michigan State University at the time,  brought home a Japanese student  to celebrate Christmas with our family.  He's sitting on the couch to the left of me, and as you can see, he was listening to the story and looking at the pictures just as intently as my grandchildren were.   Wonderful memories!

Email ThisBlogThis!Share to TwitterShare to FacebookShare to Pinterest
Labels: A Candy Cane Christmas