A Cup of Christmas Tea

For me, Tom Hegg's book, A Cup of Christmas Tea, is as much a part of the Christmas Season as reading the Biblical account of Jesus' birth in Chapter 2 of Luke's Gospel.

It's a tradition to have the short book read at our Annual Church Ladies' Christmas Tea, and even though I know the story well, it always moves my heart.

The book was published in 1982 and Guidepost magazine featured an article Tom Hegg wrote in their December 1992 issue, when the book celebrated its tenth anniversary. 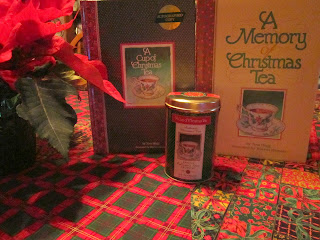 Tom Hegg was asked to write and perform something for his church's 125th anniversary in December 1981.   He struggled to come up with an idea, but finally one night after his family had gone to bed, he sat down to write, and the words to a poem [about an elderly, invalid, great-aunt who hoped her nephew could make time to drop by for a cup of Christmas tea] began to flow from his pen.

Tom finished the poem three days later and titled it, "A Cup of Christmas Tea."  He related how his knees shook when he got up to read it in church, and when he finished there was silence.  He hastily concluded his poem was inappropriate for such a special occasion, when the congregation erupted in applause that didn't stop.  As they rose to their feet, many were wiping tears from their eyes.

In the days that followed, he was asked again and again where the book could be purchased, but at that point there was no book.   He contacted Warren Hanson about illustrating his book [which is another story] and then he proceeded to find a publisher.   It was a dead end because he was told poems didn't sell and holiday books were too seasonal.  Tom's parents loaned him $10,000 to self-publish 5,000 copies.   They were a sell-out in local bookstores, but Tom barely broke even.  It was then that he received a phone call from the owner of one of the Midwest's largest book distributors who had heard about the book - Ned Waldman.  He asked if he could come to see Tom.   Mr. Waldman wept as Tom read his poem and when he was finished, Mr. Waldman asked permission to publish it as a tribute to the lady who raised him the first five years of his life.   His mother died when he was only two months old, and the family's housekeeper raised him until he went to live with one of his aunts.  Mr. Waldman didn't remember childhood memories from school, but he remembered the Christmases spent with Adele in the early years of his life that were so similar to those described in Tom's poem.

In 1992 when the Guidepost article was written, "A Cup of Christmas Tea" had sold over 500,000 copies.  I don't know what the count for the bestseller is today.

Tom ended his Guidepost article by asking, "Want to do something monumental this holiday season?  Call someone you loved as a child, or someone you haven't seen for a while, who might be having trouble getting out.  Go visit them, and settle in for a talk over a cup of Christmas tea."

The sequel, A Memory of Christmas Tea was published in 1999.

My bone china Cup of Christmas Tea teapot and teacups are dated 1992, while the sugar and creamer and cookie plate are dated 1998.  The china design is identical to Warren Hanson's illustration of the great-aunt's Christmas china in the book, and is highly collectible.

Below is my collection, plus miniature Christmas tree ornaments that aren't pictured. 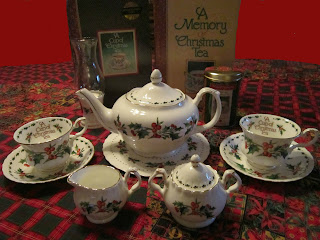 There are more pieces to the china that I don't have, but I'm grateful for what I've got. 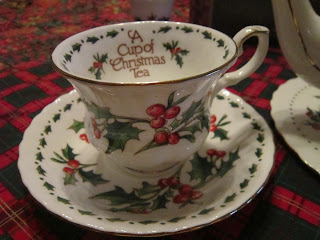 I have never opened my commemorative tin of Christmas Tea, but it's a black tea with almond, cherry, and orange natural and artificial flavorings, and a product of Holland. 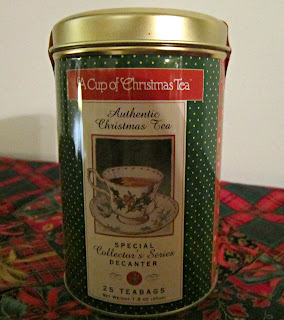 You don't have to purchase the book to read the wonderful poem.  Googling "A Cup of Christmas Tea" will bring up several links.   It'll be worth your time if you've never read it, but be sure to have a tissue handy because it will pull on your heartstrings!

Email ThisBlogThis!Share to TwitterShare to FacebookShare to Pinterest
Labels: A Cup of Christmas Tea