Before I begin my post about Royal Albert China, please join me for a cup of tea and a mini-pumpkin pie croissant. 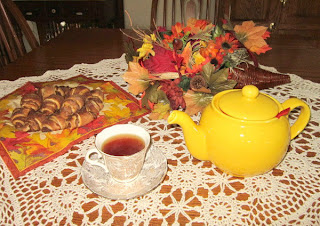 Now, we're ready to begin ...  In 1895, Thomas Clarke Wild joined his father, Thomas Wild, in the purchase of the Albert Works, Longton, Stoke-on-Trent, England.  They created their first royal commemorative items in 1897, to honor the Diamond Jubilee of Queen Victoria.
Wild became sole owner on the death of his father in 1898.   The St. Mary's Works building in Longton [photo below] was purchased in 1905, and as business prospered, Wild acquired several other pottery factories too.  His two sons, Thomas E. Wild and Frederick C. Wild were admitted into partnership in 1917. 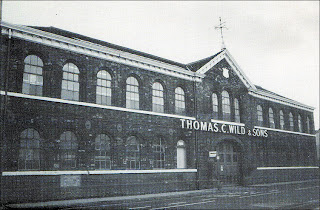 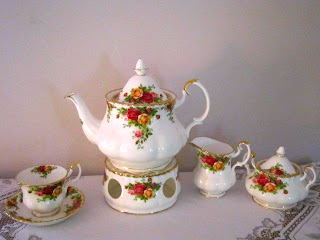 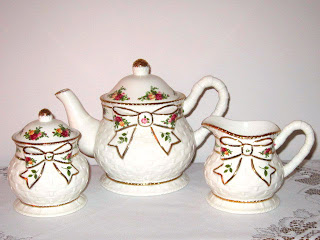 We used to have a Royal Doulton outlet within reasonable driving distance and that's where I purchased the Old Country Roses Ruby Celebration teapot below.   Sadly, the outlet is no longer there. 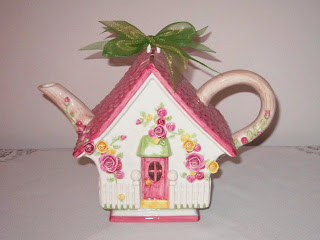 It sits high on a shelf in the family room that my hubby built specifically for teapots. 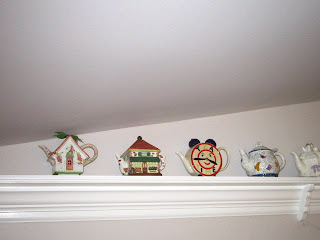 When a dear friend decided to sell her tea room "turn key," she asked me beforehand if there was anything I wanted from the tea room.  One of the things I purchased was an Old Country Roses clock she had hanging behind the counter in the gift shop.  It was one of the first pieces she bought to decorate the gift shop, that wasn't retail merchandise.  I'm always reminded of her and the beautiful tea room whenever I look at it. 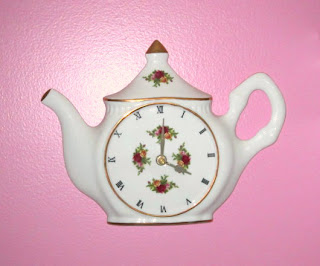 I loved it when Home Goods and Marshalls sold Old Country Roses accessory pieces, but I havent seen the pattern there for quite some time. 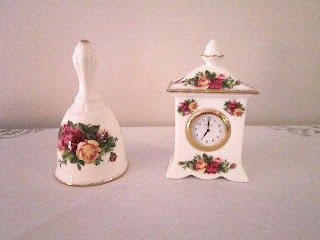 Below is one of the china cabinets in my home that displays my Royal Albert china.  It was the very first piece of quality furniture [Temple Stuart] that my hubby and I purchased after getting out of the military and setting up housekeeping.  It has stood the test of time, [three children], and looks almost as good as it did the day we purchased it 43 years ago. 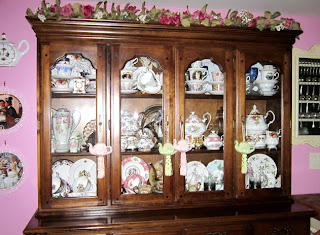 I blogged about a Valentine's tea I gave for my granddaughters here, where I used my Old Country Roses China.  It sets a beautiful table. 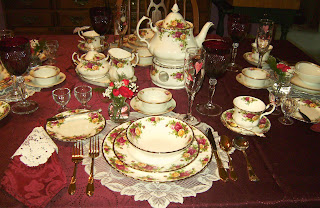 ﻿
Posted by relevanttealeaf at 7:30 AM