Tea pairs well with so many things, but today I'm pairing it with music.


Several years ago when my hubby did a lot of traveling on his job, I whiled away the time by  shopping for home furnishings.   Our house was new then, and I loved the fun of decorating it.  On one of those shopping excursions I came across a music lamp that I immediately liked and purchased.   Through the years our house has undergone several decorative changes, but the music lamp has always maintained a secure place in our home.  It's made with a real violin and bow. 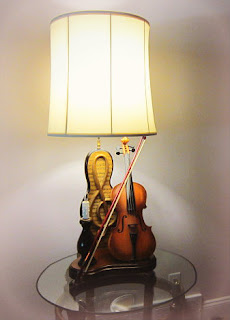 As you've read in previous posts, I've hosted tea parties with specific music themes, but even when the themes aren't musical, there is always  music playing softly in the background at all my tea parties.

One of the senior pastors that I worked for when I was a church secretary was from Canada, and a  tea drinker.  He gave me Sharon O'Connor's "Afternoon Tea Serenade" - A CD of Classical Chamber Music  [flute, violin, cello and harp] and cookbook with Recipes from Famous Tea Rooms.  Ms. O'Connor is  a professional cellist, and the author of several Menus and Music Productions.  She is the first person to ever package a cookbook with music.  In the Introduction of Afternoon Tea Serenade she writes:  "I could never have finished this volume without tea!  A confirmed coffee drinker at the beginning of the project...I found myself sampling the many teas I was learning about, and soon the pleasures of tea drinking had entirely supplanted my coffee habit."  Her CD is playing as I type and I have thoroughly enjoyed reviewing her book in preparation for writing this post. 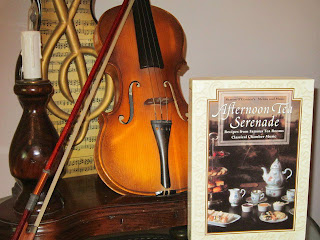 Ms. O'Connor also produced "Invitation to Tea" - for MusicCooks™   It consists of a CD with 14 chamber music selections and 16 recipe cards.  She says teatime at home is an ideal time for enjoying music. 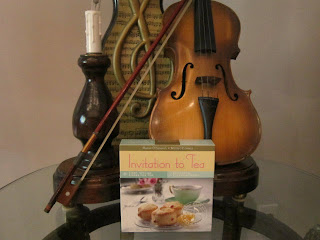 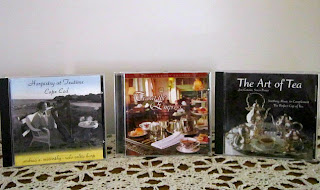 Harpistry at Teatime - A convergence of harp music, the tradition of tea, and Cape Cod.    It's by Andrea E. McCarthy, a Celtic harpist.  It can be ordered at this website:  www.harpistrycapecod.com.
Tea at the Empress [Fairmont Empress].   The CD cover states:  Pachelbel's Canon is one of the most peaceful and mesmerizing classical compositions of all time.  By blending the sounds of the sea with seven arrangements of this celebrated piece, a listening experience is created that is both majestic and serene.  It is produced by Somerset Entertainment in Toronto.  I purchased it on my 2008 visit to the Empress.
The Art of Tea by Jim Gibson, Solo Piano Improvisations.  The CD  is described as "Soothing Music to Complement the Perfect Cup of Tea."   This was my very first tea-themed music CD and I've played it so much it needs to be replaced.   The CD can be ordered at:  Hickory Cove Music P.O. Box 8504, Atlanta, GA 31106  phone: 404-892-5169.
I'm not sure these next three CD's are still available, but I want to share them as part of my tea music CD library. 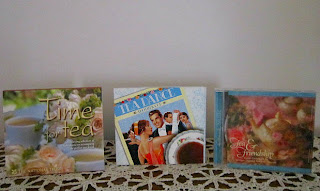 Time for Tea is music selections performed by the BBC Concert Orchestra and the New London Orchestra.  It's produced by The National Trust [Ent] Ltd.   The jacket says, "A relaxing selection of light music to accompany the perfect tea break."
Tea Dance "Another Cup" by Whittard of Chelsea.  I purchased the CD in their Windsor store when I was there in 2007.  It is produced by Past Perfect Ltd.
Tea & Friendship - Guitar Performed by William Ellwood and Eric Tingstad.  It was a special product for Hallmark Cards Inc. in 1997.
Lastly, is my newest CD:  Teatime - Easy Afternoon Listening by Sullivan Entertainment [producers of Anne of Green Gables DVD's]  www.sullivanboutique.com. 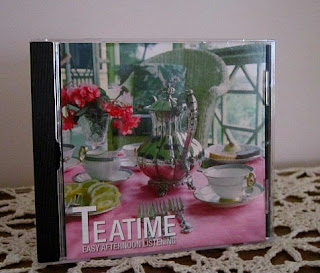 Amazon lists many other tea themed CD's.   What tea music do you listen to while sipping tea at home? 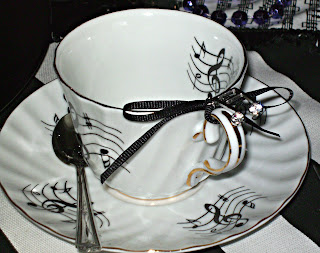