In February, 2004 my husband and I flew to Denver, Colorado to visit our youngest son,  Jeremy, a few weeks before his wedding.  While there we had Afternoon Tea at the Brown Palace Hotel.

The hotel, Denver's Grande Dame, was completed in 1892.  It's a remarkable example of Victorian architecture based on the Italian Renaissance style.  It's listed on The National Register of Historic Places and is designated a Denver Landmark. 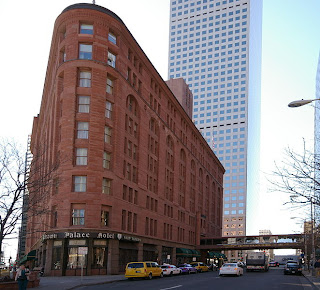 View of the six tiers of cast iron balconies from the hotel's atrium lobby. 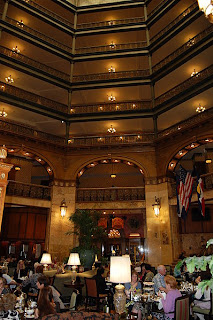 Afternoon tea is served daily from 12:00 Noon to 4:00 p.m.   Our reservations were for Noon and we arrived at 11:45 a.m.   A hostess escorted  us to a tea table set for two  in the beautiful hotel lobby.   I was impressed to see businessmen sitting at tea tables discussing business over their briefcase notes and tea.   Who says tea is just for females? 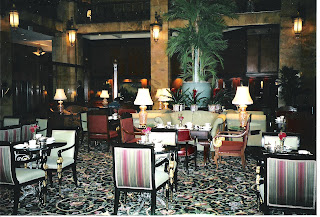 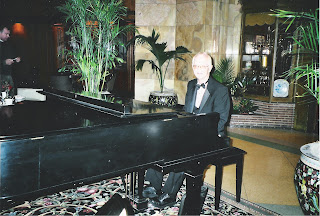 Dana was our server. 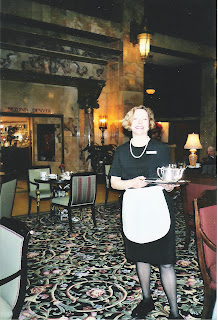 There were three  Afternoon Tea offerings to choose from:  The Brown's Tea, The Royale Palace Tea, and The Chocolate Sensation Tea.   We chose the Brown's Tea.   It consisted of a pot of tea, scones with Devon cream and preserves, savory tea sandwiches and classic tea desserts.

Dana brought our individual silver teapots to the table first.  The hotel water is supplied from a 750 foot deep artisan well, giving the freshly brewed tea an added bonus 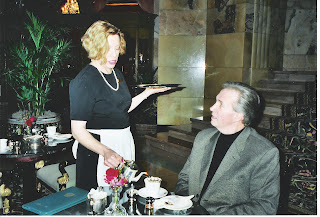 The china was white with a small floral border. A bud vase with two red roses and a cluster of tiny delicate purple flowers graced our table.   After we had a few minutes to sip and enjoy our tea, Dana returned with a three-tiered silver tray and diligently explained everything on the tray. 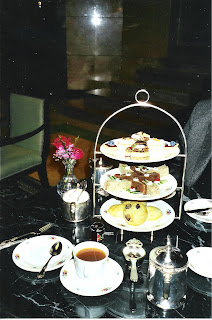 The bottom plate held four buttermilk scones - two smaller plain scones and two larger scones with dried cherries sprinkled with sugar.  They were accompanied by strawberry preserves and a bowl of Devonshire cream shipped directly from England.    Before leaving, Dana gave me the recipe for the scones printed on hotel letterhead stationery.

Cream together butter and sugar until light and fluffy.  Add flour and mix on low speed until combined.  Scrape bowl down occasionally.  Add buttermilk and eggs at once and mix on low speed for 30 seconds or until combined, then turn mixer to highest speed for 15 seconds.  Keep dough refrigerated for a least 1 hour to let rest.  Turn dough out onto floured surface and roll out to 1-1 1/2 inches thick.   Cut into circles.  Let rise for 45 minutes.  Egg wash and sprinkle with sugar if desired.  Bake at 380 degrees for 14-16 minutes or until golden. 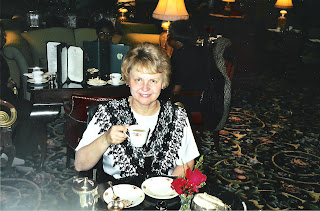 I don't usually  take milk in my tea, but this was a robust tea which paired  nicely  with milk.

The middle plate  held our savories.  A smoked salmon on pumpernickel, garnished with a dollop of cream cheese with a caper on top; sliced turkey on cracked wheat bread with a pimento cheese spread; and lastly an open faced cucumber sandwich on white bread spread with a dill cream cheese. 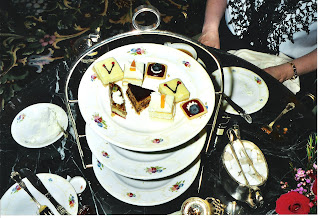 The top tier held our desserts.  A square tartlet with raspberry filling;  passionfruit cheesecake; an orange petite-four;  a cake-like pastry with a pecan filling; and lastly their signature dessert cut in a triangle to resemble the shape of the hotel with seven layers  representing the seven floors of hotel rooms.  The layers consisted of a mocha filling topped with a layer of chocolate.   Everything was made by the hotel chefs and bakers.  Delish!

Somewhere during our tea-time, the music transitioned from the piano to the harp.  It was lovely music! 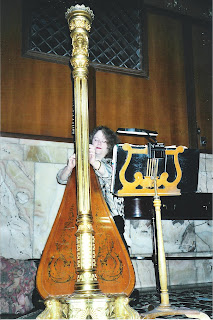 Because we were there on a Wednesday, we got a "bonus" we hadn't planned on - a free 45 minute tour of the hotel.

Our tour guide took us inside the 9th floor hotel suite of former President Dwight Eisenhower and his wife, Mamie.  It was known as the "Western White House" while he was in office.  Mamie grew up in Denver and her mother still lived there during Ike's two Presidential terms.   The suite is available for overnight occupancy for $1,000 a night!  The guide pointed out a dent  in the  fireplace mantel caused by a golf ball gone astray  when President Eisenhower was practicing his golf swings indoors! 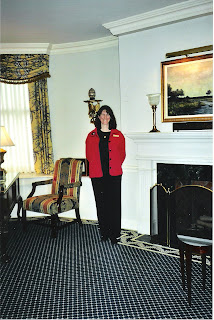 It was a memorable afternoon, and ranks at the top of my favorite hotel Afternoon Tea experiences.
Posted by relevanttealeaf at 5:00 AM