Shopping at the "Grand Dame" of Woodward Avenue

This is a 1956 photo of shoppers in downtown Detroit,  and the J.L. Hudson's Department Store.  [The DDD blocks stand for Downtown Detroit Days.]  I vividly remember my mother and I riding the bus downtown for all-day shopping excursions at Hudson's when I was a child. 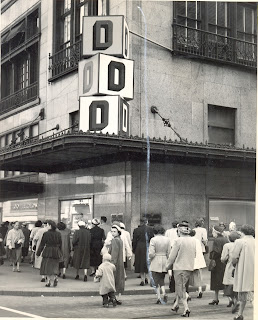 Upon entering the bronze doors, there was so much to see and explore. 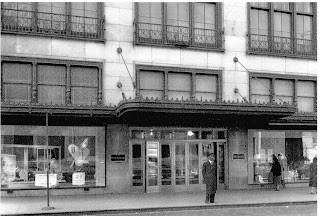 Close-up of name plates on the exterior wall of the store in the photo above. 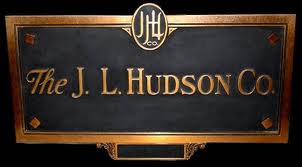 The J.L. Hudson store was massive, filling one square city block of Woodward Avenue [the "Motor City's" main artery].  It was spread out over  25 floors, 17 of which were devoted to retail, two half-floors, a mezzanine and five basements - two of which housed the world's biggest "Budget Store," which was a store within "THE" store dedicated to thrifty shoppers.  At one time, Hudson's was the tallest department store in the world.  It's shopping floor space totaled 49 acres - the equivalent of 1,200 averaged-sized 1940's homes.   More than one-half million commodities were sold in that shopping space. 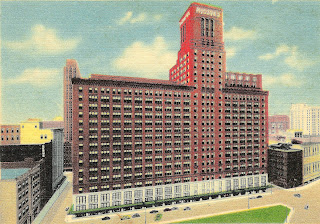 Hudson's was rated number two in the nation's three largest department stores in the mid-1960's, both in sales volume and building size.  Macy's main store in New York City was number one and Marshall Field's was third.

My earliest recollection of the gigantic store wasn't "Toyland" on the 12th floor, but rather the walnut paneled elevators and the friendly, neatly uniformed operators who greeted shoppers upon entering, closed and opened the folding safety gate, pressed the operating buttons on the wall panel, and called out floor numbers before exiting.   Those elevator rides were real "tummy-ticklers" and reminded me of amusement park rides! ;-)


As a high school teenager, my girlfriend and I went to the downtown store to purchase our outfits for "Senior Dress-up Day."  And when I became engaged I filled out my bridal registry  at the flagship store.   How exciting when those green Hudson delivery trucks pulled up in front of my parent's house, and the driver emerged carrying wedding presents to  be delivered to the front door.

Millinery  was on the first and seventh floors.  Ladies of earlier times always wore a hat to tea rooms or almost any place for that matter!    The two vintage hats pictured below are from J.L. Hudson's.  The turquoise hat still has the original price tag of $3.99 attached. 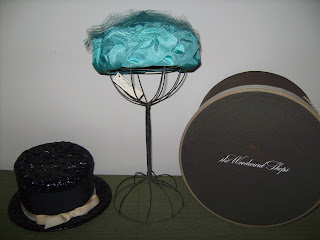 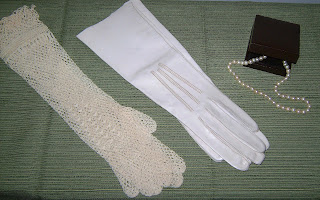 Women's hosiery was sold on the first floor.   Going bare-legged was unacceptable - except during WWII when there was a limited supply of hosiery and women resorted to painting their legs with leg-makeup as an alternative.     Hudson's reserved a portion of their hosiery allotment during the war for their female employees so they wouldn't come to work stockingless.

I found this box of women's hosiery in an antique store and knew I had to buy it when I saw the color of the hosiery printed on the end of the box was "Teatime!" 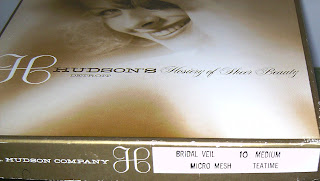 Nylon stockings were still being sold since pantyhose hadn't become the rage yet! 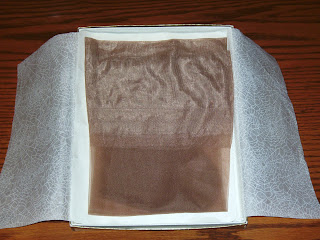 This concludes my series of posts on the J.L. Hudson Department Store.   I hope you've enjoyed reading it half as much as I've enjoyed writing about it.   Hopefully  it has  stirred fond memories of the department store where you shopped in days gone by.