The first time I saw a wooden three-tiered folding stand was at Magnolia & Ivy [tea rooms in Georgia and Florida].  Owners Kay and Terri said their's were close-outs at Bombay, and they were searching  sources to reproduce them.  They stood them next to tables to hold filled teapots to free up space on the tabletop.

When my husband and I traveled to Elmwood Inn before it closed, I saw the stands used there too.  I was told theirs were vintage and not reproductions.  My interest was piqued and I began researching them.  I found they go by an assortment of names...  curate's stand, Butler's stand, muffin stand, pie stand, and cake stand.   The repros are called plant stands.

I knew I wanted one and kept an eye  out for them in antique stores, and I found one!  They're perfect for displaying teapots. 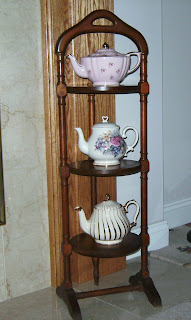 A friend showed me a different style - a squattier, rectangle shaped stand with only two shelves, but it folds-up like the three-tiered stands.

Imagine my delight one Saturday afternoon in 2007 as I was wandering through an outdoor antique show, and spotted one!  The seller said he found it on a buying trip to England a couple of months earlier, and said it was called  a "pastry stand."   These seem to be a little bit harder to find than the three-tiered stands. 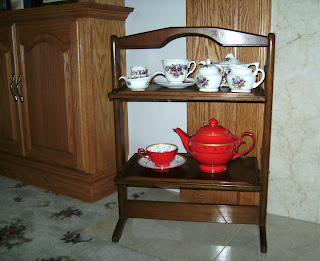 I am happy to have found both of mine.