Would You Risk Jail for a Cup of Tea?

Recently my thoughtful British/American friend [she has dual citizenship] sent me an e-mail containing an April 2nd BBC article about tea.  It's an interesting read over your cup of tea today. 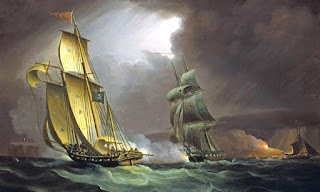 The caption with the above photo reads: "Smugglers being chased by the Royal Navy. Virtually every seaside community in Britain saw its share of smuggling in the 18th century."

The title of the article is the title of my post today, and the subtitle is "How a 119% tax on imports in the 1750's helped smuggling become a vital part of the UK economy."  It's written by Tim Bowler, Business Reporter, BBC News.

To read the entire article click here.  Thanks, Ruth, for sharing the article with me.

In all honesty, I love my tea, but I don't think I'd be willing to go to jail for it.

Posted by relevanttealeaf at 10:05 AM

Email ThisBlogThis!Share to TwitterShare to FacebookShare to Pinterest
Labels: tea