I've several things to write about so this post will be a compilation of multiple recent happenings.

Yesterday was Bible study at my house - this session's "Woman of the Bible" was Tamar, the daughter-in-law of Judah.  It always encourages me to see how God uses imperfect and unlikely women [from mankind's limited perspective] to accomplish His purposes.

As always, we had lunch after Bible study.  I had a ham bone left from Easter Sunday dinner that was perfect for making bean soup.  I served it with cornbread and broccoli muffins.  I forgot to take pictures, but the recipe for the muffins [using Jiffy cornbread mix] can be found here. I also added a cup of grated Cheddar Cheese to the recipe.  Dessert was simple, lite, and perfect for spring.  I purchased individual angel food bundt cakes, and cut them in half and spread a layer of lemon pie filling between them.  Then I drizzled lemon frosting over the top.  There was, of course, lots of tea with our meal.  I'm glad my girlfriend reminded me to get a photo of the dessert [below]. 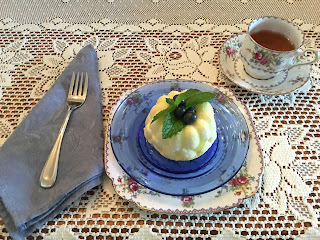 Granddaughter, Tiffany, only has 19 more days until little Evie is 'scheduled' to make her appearance into this world.  Tiffany posted the photo below on Facebook yesterday.  It's taken in front of her house near Lansing, MI.  She's all finished working now until after Evie's birth. Actually that's when her work will really begin, but she and John will make amazing parents! 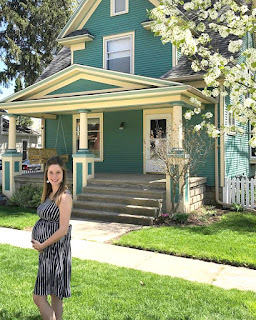 Sunday was my monthly program at the assisted living facility.  I titled it, Memories of Downtown Detroit Shopping.  I knew it would be a nostalgic topic the residents could all relate to.  Aside from numerous department and clothing stores on Woodward Avenue, we talked about Sanders Confectionary [established in 1875] and the Vernors Ginger Ale factory [established in 1866].  Both [though no longer family owned] are still available, and very much a part of Detroit's history and current enjoyment.

Vernors brand is now owned by Dr. Pepper/Snapple Group of Plano, Texas and is sold in 15 states, but Michigan accounts for the majority of its sales.  I served a glass of Vernor's to the residents while I talked about the company.  Is Vernor's sold in your state?  I talked about Vernors' competitor, Faygo Pop, but I didn't serve any. 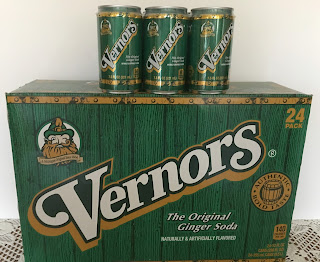 There's a Sanders store close to my house, so I went there the day before my presentation to buy some Sanders candy [chocolate/pecan turtles] for the residents.  Just walking inside the store brought back wonderful memories from my childhood, and my children's childhood. To this day they still talk about me taking them to Sanders for the confectionary's signature dessert - hot fudge ice-cream puffs. 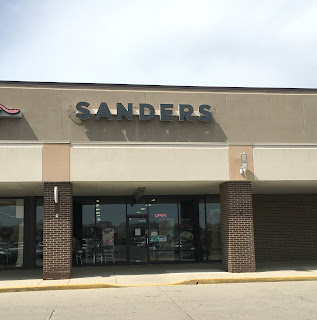 The store has tables to sit at now instead of sitting up at the counter.  When I was there a group of men were sitting around one of the tables enjoying conversation.  Another man came in with his young son for an ice-cream cone and related his childhood memories of Sanders individual lemon meringue pies.  Memories are so sweet, and nothing can compete with them! 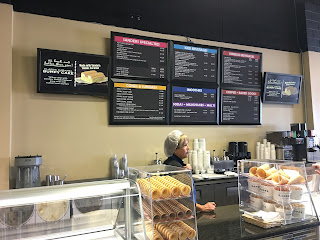 With Sunday's presentation behind me, it's time to hunker down and begin my research on Shirley Temple.  That program is scheduled for May 7th, which will be here before I know it.

On Good Friday, we went with our son [Steve], daughter-in-law [Sharon], and granddaughter [Brooke], to see the faith-based movie The Case for Christ.  It's the true story of the once fiercely committed atheist, Lee Strobel, [an award winning journalist and legal editor at the Chicago Times] and his quest to prove Jesus Christ didn't exist in the context of a Supreme Being.  After extensive research and investigation with several noted scholars and experts, he couldn't disprove the credible evidence of Christ's existence, or His crucifixion and resurrection. In the end, he became a Christian.

Lee Strobel is played by Mike Vogel and his wife, Leslie, is played by Erika Christensen. I highly recommend this movie.  I wish I could give a DVD to every friend I know who doubts the Deity of Christ.  I love the words Christ spoke to Thomas in John 20:29 after His resurrection: "Because you have seen me, you have believed; blessed are those who have not seen and yet have believed."  In other words, us! 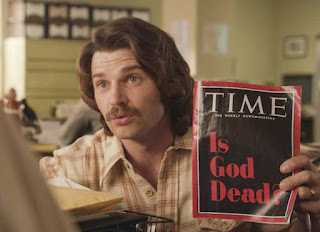 While some of my family members were traveling parts of the US over spring break, they brought souvenirs home for me.  Daughter-in-law, Samantha, brought me back a cookbook and note cards from Lee Drummond's Mercantile in Pawhuska, Okalahoma.  I love Lee Drummond and have another of her cookbooks, A Year of Holidays.  Thanks for your thoughtfulness, Sam! 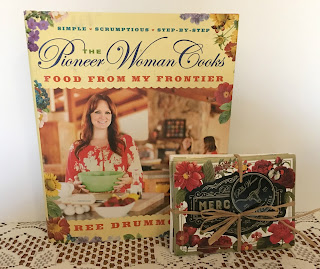 Jerry brought me back a commemorative mug from Cafe Du Monde in New Orleans - the original French market coffee stand.  Would it be heresy to drink tea in it? ;-)  He offered to bring me back some beignets, but I told him thanks but no thanks - by the time he returned home they'd be past their prime. 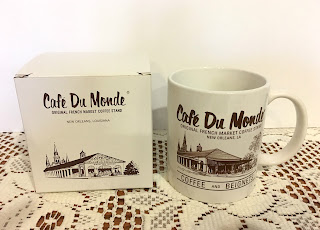 Life isn't made up of all sunshine and roses... my beloved paternal aunt from Baton Rouge, Louisiana passed into eternity on Easter Sunday night.  I was sad I couldn't fly down for the service that celebrated her life, but it just wasn't possible.  It seemed fitting that she departed on Easter Sunday - the day Christ conquered death and the grave by His resurrection, assuring believers that death and earthly parting are only temporary.  Rest in Peace, Aunt Dot!

I've had the privilege of having my sweet daughter with me for a couple of days while recuperating from a medical procedure.  She went back home this morning and I miss her already.  I love every opportunity to exercise my motherly privilege of spoiling her.  What fun we had spending two evenings munching on popcorn while watching numerous episodes of Call the Midwife on Netflix together.

There now!  I think I've gotten you all caught up on the latest happenings in my corner of the world so I'll sign off.  Take care everyone!

Posted by relevanttealeaf at 11:18 AM