A Tour of Detroit

When I wrote my post on Monday [4/17], I mentioned that we had booked a tour of Detroit with Show Me Detroit Tours, and today was the day.  The weather forecast predicted severe thunderstorms, but fortunately we only experienced overcast skies.  If you've never toured Detroit, come along with me vicariously on today's post.

The two hour tour took us to parts of downtown [including Greektown, and the Stadium/Entertainment District], parts of Midtown, Eastern Market, Indian Village [a residential area] and Belle Isle [an island in the Detroit River], but this tour was by no means inclusive.  To see all the sights of Detroit would require multiple tours.

We met Pat, our tour guide and owner of the company, at Rivard Plaza at 10:00 a.m. this morning. Rivard Plaza is on the Detroit RiverWalk. 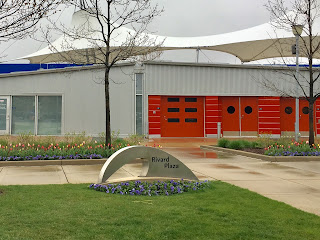 The RiverWalk will span five miles when completed, but right now only 3.5 miles of the walkway is done.   The project was developed in 2007, and when finished will extend from the Ambassador Bridge to Belle Isle.  Rivard Plaza is the focal point, and is located near the middle of the East Riverfront. 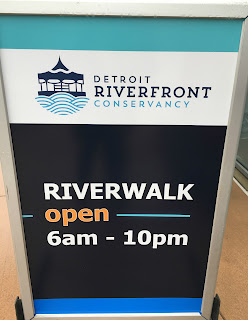 The cluster of circular skyscrapers on the right is the Renaissance Center - a complex of seven buildings on the Detroit riverfront with the tallest being the GM Building. The top of the building isn't visible in my photo because of low cloud cover.  It was originally built by Henry Ford's grandson, Henry Ford II, between 1977-1981, but is owned by GM now, and is the company's world headquarters.  The Detroit Marriott Hotel is also located in the 73-story tower - Detroit's tallest skyscraper. There are complimentary public tours of the facility M-F at noon. Even though I've been in the tower before, it was a long time ago, so I'd like to go again. 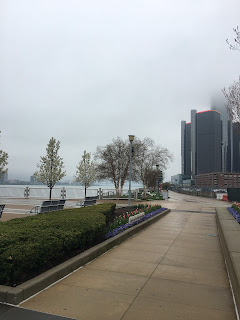 Looking across the Detroit River into Canada.  In the distance you can see the Ambassador Bridge that connects Detroit to Windsor, Canada.  On a clear day it would have been very visible. 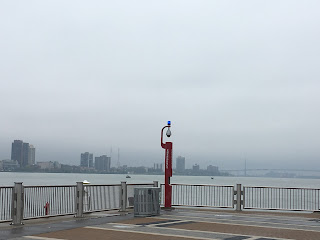 There were numerous boats [all the black specks in the photo below] of fisherman fishing for Walleye in the Detroit River today. 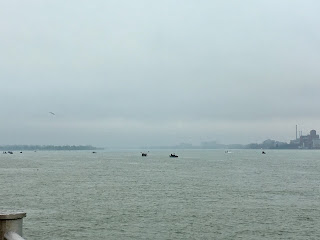 Pat was giving us some facts about the RiverWalk and riverfront.  Besides Jerry and me, there was one other lady on the tour from south Indiana.  She was here visiting her daughter. 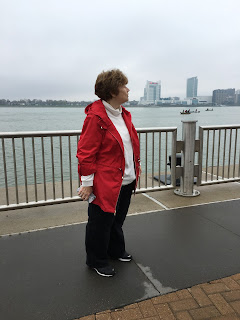 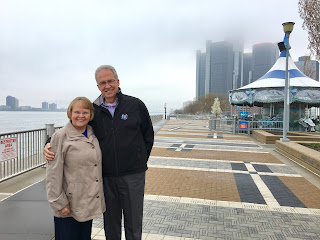 [Jerry and Me on the RiverWalk]

The downtown tour began with a stop in front of the Coleman Young Municipal Center, built 1951-1954.  It was originally called the City-County Building, but was renamed in 1997 after the former mayor. It's government headquarters for the City of Detroit, and houses the courthouse.   The 26-foot tall sculpture in front is called the Spirit of Detroit - a name given to it by the residents based on a scripture in II Corinthians engraved on the wall behind it. In one hand the man is holding a family, and in the other the sun. 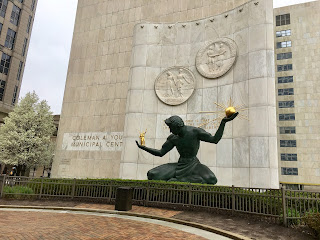 Our first 'hop out' stop was the Guardian Building on Griswold Street.  It is known as Detroit's Cathedral of Finance, because it was built for a bank in 1928.  The Art Deco interior looks like a Cathedral.  The 36-story structure is now owned by Wayne County and is their headquarters.  The three-story lobby features local Pewabic tile.  We had a few minutes to go inside and look around. Inside was a Pure Detroit shop where I purchased a bottle of Faygo pop for my presentation at the assisted living facility this Sunday [more about that in a post next week]. 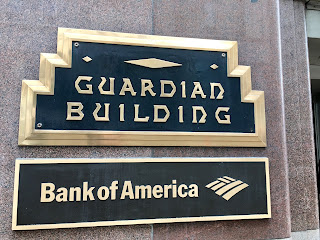 [One side of the entrance] 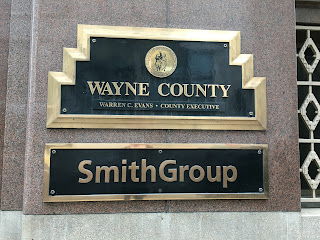 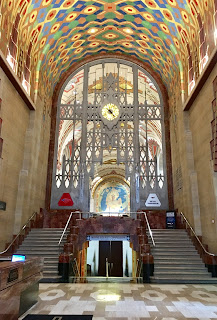 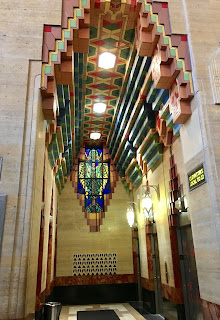 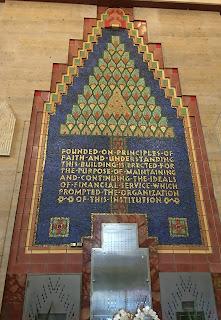 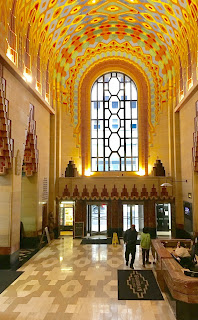 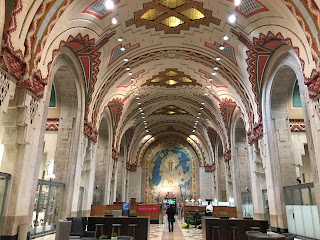 From there we drove past the Penobscot Building [also on Griswold] constructed in 1928.  It was Detroit's tallest building before the construction of the Renaissance Center.  It anchors the financial district, and was named for the Penobscot Native American Tribe in Maine. 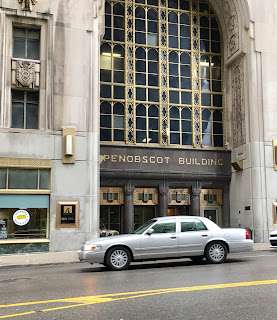 An upward view of The Westin Book Cadillac Hotel built in 1924.  It was once Detroit's leading hotel located on Washington Blvd.  After multiple owners, it closed its doors in 1986. It underwent a $200-million reconstruction and reopened in 2008.  I had high hopes they would have an Afternoon Tea program, and contacted management about it before they opened.  They referred me to the Food and Beverage Director, but he had no interest.  There are no hotels in Detroit that offer Afternoon Tea.  That's such a pity when hotels in Chicago, Cincinnati, NYC, Denver, Memphis, and many other large cities bustle with Afternoon Tea patrons. 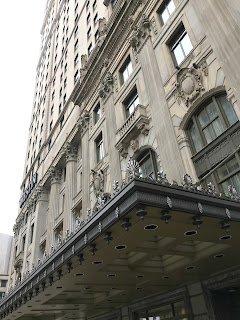 Below is a very sad picture - it's the vacant lot where Detroit's iconic J.L. Hudson's Department Store once stood on an entire city block.  The landmark was imploded in Oct. 1998.  Pat said Dan Gilbert of Quicken Loans plans to build a multi-story building on the site that will house retail stores, offices, and apartments.  If he would have been around in 1998 he probably would have saved the building from its destruction by city planners and officials who had no foresight.  It's a shame Detroit lost such a significant landmark. 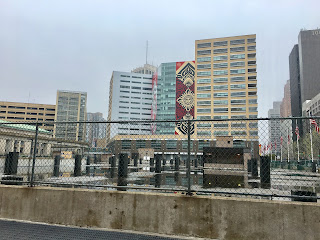 For a bit of nostalgia, the building the red arrow is pointing to below is the Metropolitan Building built in 1924-25. The 15-story building was once the city's jewelry emporium housing diamond cutters, goldsmiths, and watchmakers which led to it becoming known as the "Jeweler's Building." It's where Jerry purchased my engagement ring.   We had forgotten the name of the building, but Pat knew it's name and exactly where it was located.  The building has been vacant since the late 1970's, but is presently being renovated into a hotel with retail on the lower level.  It will open in July 2018.  When I got home I retrieved the original receipt for my ring dated 11-12-1965 from Reich Jewelry, Inc. at 905 Metropolitan Building on John R. Street just off Woodward, in the central business district. 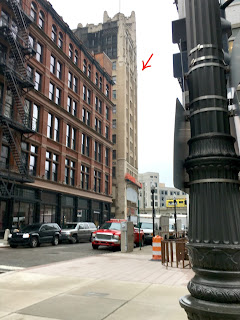 I will close the post here, and continue the tour tomorrow.  Ya'll come back, 'cause there's lots more interesting sights!

Posted by relevanttealeaf at 9:26 PM