In Detroit [and metro Detroit where I live] we feel like spring has finally sprung when the Detroit Tigers begin playing baseball at Comerica Park.  Their first home game was April 7th, but my hubby and son, Steve, donned their Tiger-wear, and went down last Tuesday [the 11th] to watch the Tigers play Minnesota. 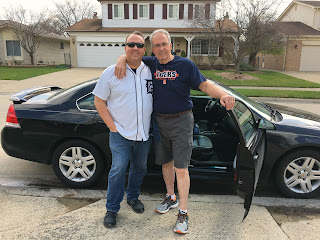 The day was sunny and warm, and they saw a winner [2-1], so it was a good day at the ballpark! 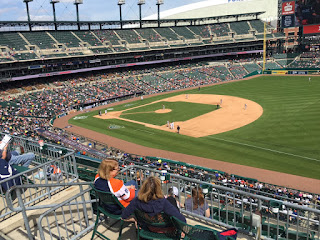 On Thursday, Jerry and I took a drive back downtown.  I'm doing my monthly presentation at the assisted living facility on April 23rd and my program is Great Sights and Memories of Detroit.  My audience is mostly ladies, and since ladies love to shop, I decided to focus on the stores that once lined Woodward Avenue, or Merchant's Row as it was called [excluding J.L. Hudson's because I've done a 'solo' presentation about that great store].  Our Thursday ride took us down Woodward Avenue, and amazingly only one store that existed during downtown's 'heyday' still bears its name on the building's facade - Himelhoch's, a store that sold women's outer garments, including furs and a bridal salon.  My research stated "every woman who was anyone shopped at Himelhoch's." The store closed in 1979.

I couldn't take any photos because automobile traffic had to keep moving, but all the buildings that housed stores of Detroit's former bustling downtown area are now occupied by new businesses and apartments.

Heading away from the downtown shopping district but still on Woodward Avenue, we made two stops.  The first was the Detroit Historical Museum, and second was the Detroit Public Library.

The current exhibit at the historical museum - Streets of Old Detroit - provided some great visual photos for my presentation. 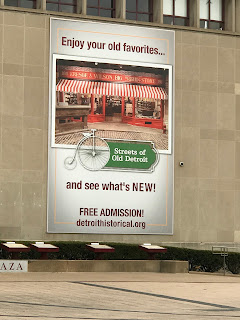 They have recreated an S.S. Kresge dime store, which I had planned to include in my presentation. Remember those great Kresge and Woolworth's dime stores?  When I was a kid, my mom and I used to eat at Kresge's lunch counter when we'd go shopping in downtown Detroit for the day. 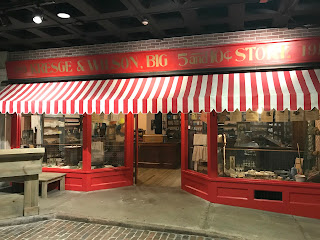 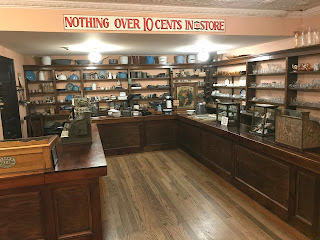 I was so pleased they had recreated the pharmacy owned by James Vernon I where he sold his famous Detroit beverage Vernor's Ginger Ale.  I took a photo of the Model 21 cut glass dispenser from 1929.  I plan on serving the ladies some Vernors Ginger Ale during my presentation. 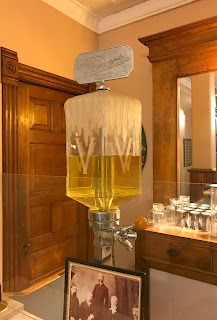 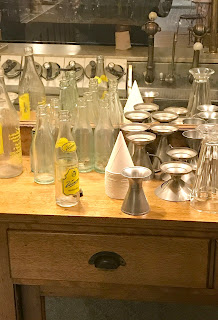 Another great Woodward Ave. store that I had planned to include in my presentation was Sanders Confectionery, and it was also recreated at the historical museum.  Each attendee will receive an individually wrapped piece of Sander's chocolate candy [now owned by Morley Candy Company]. 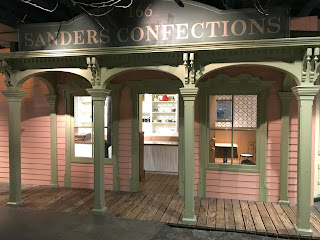 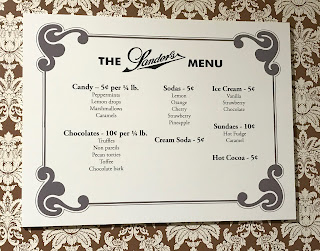 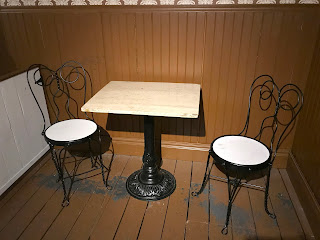 I hope the program will be a nice walk down memory lane for the residents.  I certainly have been enjoying my research, and have purchased several resource books.  I LOVE Arcadia's Images of America books. 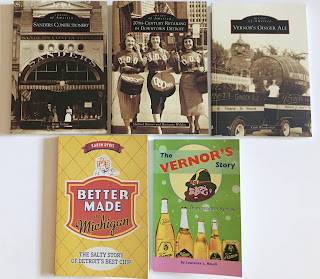 From the historical museum we walked across the street to the Detroit Public library, which is the largest library system in the State of Michigan, and the fourth largest public library system in the United States. The beautiful building is constructed of Vermont marble and trimmed in serpentine Italian marble in Italian Renaissance style.  It was built in 1921 and is listed in the National Register of Historic Places. I wanted to go to the Burton Historical Collection to see what I need for accessing the J.L. Hudson files.  I was amazed that a large area in the entryway contains a working card catalog.  I wish I would have photographed it, but I will when I return. 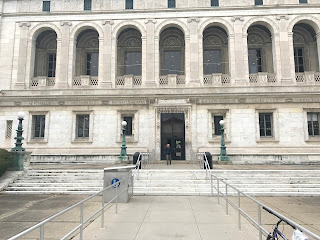 On Woodward Avenue, the new Qline streetcars were being tested.  They will officially begin running for the public on May 12th from the foot of Woodward up to Grand Boulevard. 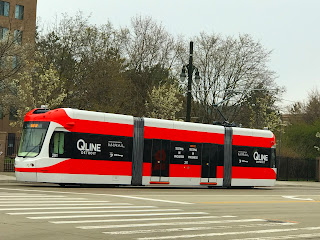 We were so impressed with our downtown Detroit visit that we scheduled a tour with Show Me Detroit Tours for later this week.  I'll be sure to blog about it.  Detroit is finally making a positive comeback.

Before we headed home, I wanted to see the house that Nicole Curtis, of HGTV's Rehab Addict show, restored in 2015.  It was the Ransom Gillis home built in 1876, located at 205 Alfred St. in the Brush Park District.  It had been unoccupied since the late 1960's and amazingly hadn't been demolished like so many other homes in the area.  The few that remain are also being renovated.

Below is an Internet photo of what the house looked like when it was built for Ramsom Gillis, in 1876.  In the vacant carriage house behind his home, Mary Chase Perry Stratton and Horace James Caulkins founded Pewabic Pottery in 1903, as part of the Arts and Crafts Movement. The carriage house was named "Stable Studio." Pewabic Pottery is currently located on East Jefferson Avenue in Detroit. 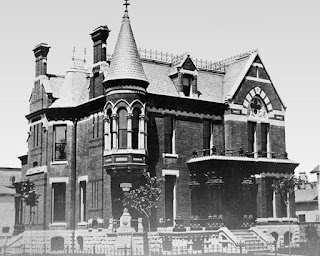 Internet photo of what the sad house looked like in 2005. 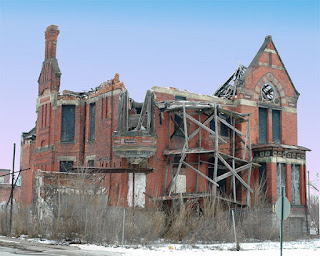 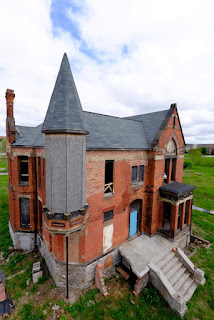 Below is a photo I took of the house following Nicole's amazing rehab. The house is now privately owned so we couldn't go inside, but pictures are available on the Internet. Who would have thought - besides Nichole - that it could ever be brought back to its former glory. 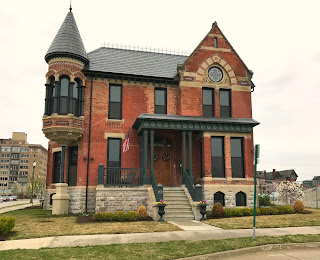 Before getting on the expressway to return home, we unexpectedly came upon Henry Ford's Piquette Avenue automobile plant - the birthplace his Model T, so it deserved a photograph.

During my presentation research I read that Sanders was one of the first companies in Detroit to use an electric motor.  He hooked it up to an ice crusher for his ice-cream-making process. Frustrated over the inconvenience of the motor's tendency to break down he threatened to get rid of it until the Edison Illuminating Company sent over a young mechanic to fix it.  The mechanic was Henry Ford, and the motor worked well after his visit. I love history, don't you? 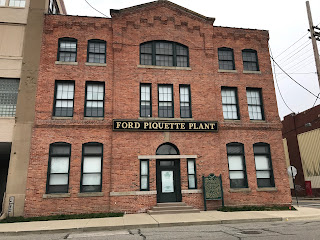 It was a very fun and educational day in downtown Detroit!

Posted by relevanttealeaf at 12:56 PM